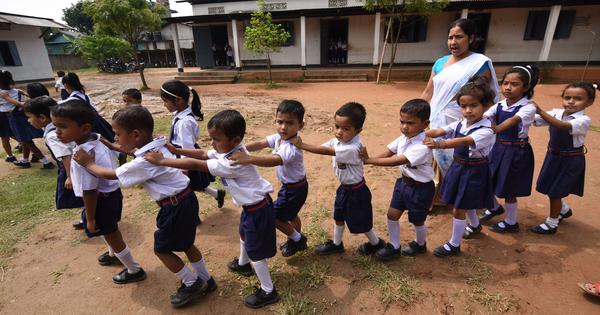 In Assam, the state cabinet’s decision to introduce English as the medium for teaching science and mathematics in grade 3 in all government schools has sparked heated debate.

The debate has become politically charged, as linguistic identity has been the driving factor of strong subnationalism in the state.

On September 21, nine opposition parties protested the ‘anti-education’ policies of the Bharatiya Janata Party-led government. The statement brought together various parties from the Congress and the left to regional groups such as the Assam Jatiya Parishad and the Asom Raijor Dal. The latter have based their policies on protecting the ethnic and linguistic identity of Assamese.

The controversial decision was made in July. The cabinet had also decided that math and science textbooks would be printed in English in time for the academic year starting in July 2023. The decision applied to all government and provincial schools that normally used Assamese or regional languages ​​as the medium of instruction. Provincial schools are those institutions for which the government bears financial responsibility for salaries and other payments.

The cabinet has also decided to introduce a double instruction language from grades 8 to 12 at all these schools. This would allow school authorities to introduce English as the medium of instruction in addition to the existing regional languages.

The opposition has objected to the new measures on the grounds that schools do not have the infrastructure to teach in English and because they conflict with national education policies. The policy, passed in 2020, recommends that “wherever possible”, a student’s native or local language should be the language of instruction until at least Class 5, if not Class 8.

“Studies from around the world and scholars have said that only if you learn subjects in your own language will concepts be clear,” Asam Sahitya Sabha president and former director general of police Kuladhar Saikia told Scroll.in. “We protested the move to change the medium” [of instruction] and will continue to do so.”

Earlier, however, Assam’s chief minister, Himanta Biswa Sarma, had lashed out at Saikia, pointing out that both their sons had studied in English-language schools. “We shouldn’t play with poor people’s lives,” Sarma had said, referring to the fact that students from disadvantaged families had no choice but to go to government schools.

Opposition to the government plan shows that the wounds caused by language movements in the past are still fresh.

After years of mobilizations, the Assam government passed a law in 1960 recognizing Assamese as the official language of the state. This sparked a movement in the predominantly Bengali-speaking Barak Valley to protest the new law. After nine protesters were killed in 1961, the government withdrew the law.

The case did not end there. In 1972, the All Assam Students’ Union launched a movement demanding that Assamese become the language of instruction in colleges across the state. The same student union would lead the Assam movement that started at the end of the decade and demanded the expulsion of “foreigners,” mostly Bengali-speakers in the state. It would eventually give rise to an armed movement for a sovereign Assamese state.

He said the government had “made a wrong and unscientific decision” because the mother tongue was the most effective means of learning. “They should withdraw it immediately,” Bhattacharya said.

Others argue that the burden of preserving language and culture should not be placed on children who attend government or provincial schools, who are usually poorer than those who have access to private English-language schools.

“Regional authorities have argued that adopting English as the medium of instruction for science and mathematics will harm Axomiya culture,” said education and law activist Prasum Goswami. “Why shouldn’t marginalized children study science and math in English and carry the baggage of preserving ‘Axomiya Culture’? Elite private schools teaching children from privileged backgrounds continue to use English as the language of instruction.”

He also pointed out that government schools in Assam offer only nine types of education, but the state has more than 200 languages.

“Even now, not all children study in their mother tongue,” he argued. “Strong foundational skills with the use of the native language and a robust teacher support system will aid in the smooth transition from the language of instruction to English.”

“ASER [Annual Status of Education Report] has already proven the appallingly low achievements of Assam’s students in mathematics and language,” she said. “A language is not just a means of communication, it is a medium of thought, reflection, creativity and ingenuity. If a child cannot think and ask questions in his/her own language, learning will slow down. A child’s cognitive space is extremely complex, we should not play with it.”

She added that science and math weren’t just subjects to be passed — they were essential knowledge to operate in the world. “Mathematics is knowledge of numbers for everyday use for logical analysis and reasoning,” Dutta said. “Science is an intellectual and practical activity to understand the natural and social world through observation and experimentation”

Sharma pointed out that many languages ​​were already extinct. “If it continues like this, we are all concerned that our Assamese, Bodo and other vernaculars are also dying out,” he said.