Who is Hadi Matar, man who stabbed Salman Rushdie? 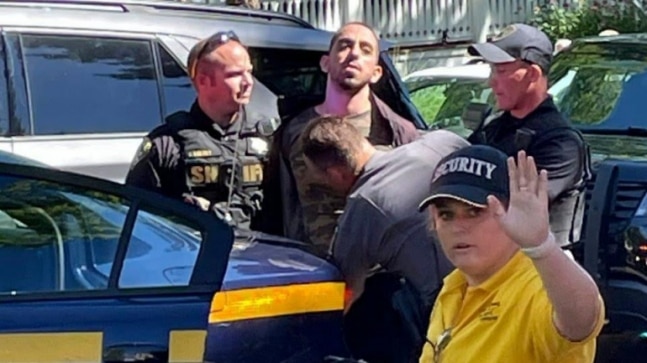 Hadi Matar (24) is taken away by authorities after attacking author Salman Rushdie. (Image from Twitter)

WHO IS HADI MATAR? The president of the Chautauqua Institute in New York, where Rushdie was due to give a speech, said the attacker had an access pass to enter the grounds “as any other patron would have”.

Major Staniszewski said authorities are in the process of obtaining search warrants for several items. A backpack was present at the scene. There were also electronic devices.

He added that the investigation is still in its early stages and there is no evidence of a motive at this time. New York police are working with the FBI and the sheriff’s office to determine the motive behind the attack, Staniszewski said.

He went on to say that it is currently believed the suspect was “working alone”, but they are investigating whether that was the case.

Indian-born writer Salman Rushdie was stabbed Friday as he was about to give a lecture at the Chautauqua Institute in western New York. He was taken by helicopter to a hospital where he was operated on for his injuries.

According to his book agent Andrew Wylie, Rushdie could lose an eye after the attack. Wylie added that nerves in Rushdie’s arms had been severed and his liver had been damaged after being stabbed in the torso.

Rushdie was due to give a lecture on artistic freedom at the Chautauqua Institute where he was stabbed.