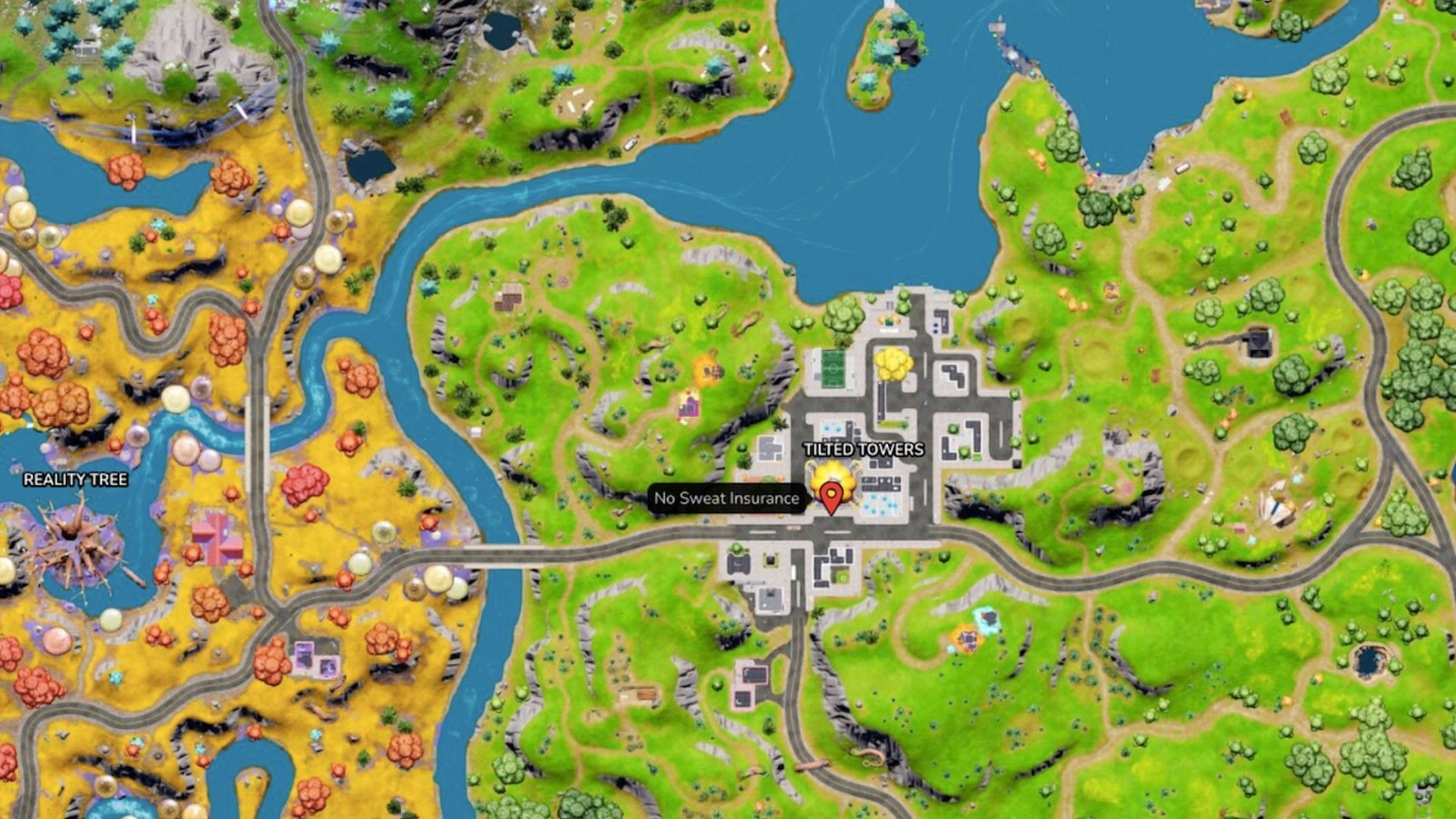 Over the years, the Fortnite map has received a plethora of updates and many new POIs and landmarks have been introduced in different seasons and chapters. While the island is refreshed with each chapter, many fan-favorite locations are often preserved; No Sweat Insurance is one such milestone.

Located in the heart of Tilted Towers, No Sweat Insurance stands tall. Like many other POIs in Fortnite Chapter 3 Season 4, this building is now elevated with jets and balloons. This was done as a precaution against the spread of Chrome.

Introduced in Fortnite Season 8, the organization has been part of the game for a long time. No Sweat Insurance has contributed to the lore and has been the impetus that gave the loopers the iconic Tilted Towers, and like other iconic landmarks, this one also has a vibrant history.

No Sweat Insurance is located in downtown Fortnite Island

The No Sweat Insurance building is the most iconic structure in Tilted Towers and can now be recognized as a floating building. Players can see the landmark by locating a yellow balloon on the in-game map, which can be found directly south of the soccer field in Tilted Towers.

Tilted Towers is a named location in the center of the map and is well connected by roads, allowing players to access it from any part of the island. The POI is served by three different access roads from three different directions and is located east of the Reality Tree.

Depending on where they land on the map, players can easily follow the vast road network and arrive at Tilted Towers. Once there, all they need to do is locate the floating building with a giant yellow balloon. They can also track the location of the Underwriter NPC and arrive at No Sweat Insurance.

History of no sweat insurance

That No Sweat Insurance has survived almost every disaster and will now float away when the chrome reaches Tilted Towers. This building is a piece of Fortnite history

That No Sweat Insurance has survived almost every disaster and will now float away when the chrome reaches Tilted Towers. This building is a piece of Fortnite history

Fortnite’s financial backbone, No Sweat Insurance, was added to the game in Chapter 1 Season 8 and is more than just a business. The organization helps rebuild devastated areas and prevents locations and POIs from recurring damage.

Over the years, No Sweat Insurance has contributed to the game in many ways. Iconic Tilted Towers has been the biggest beneficiary of the organization when the first branch opened in the POI and has seen all the major events so far. When the POI was destroyed, the branch continued to operate from Neo Tilted.

While many of its branches have grown across the map over the years, the organization has remained loyal to Tilted. In Fortnite Chapter 3, the landmark returned to its iconic location and has remained there ever since.

No Sweat Insurance will continue to save more POIs throughout the season. The balloons will also move and carry locations across the map!

No Sweat Insurance will continue to save more POIs throughout the season. The balloons will also move and carry locations across the map! (Pictures: @ESFortniteBR2)

It was overtaken by the Imagined Order (IO), but soon became independent when they lost control of the POI. Since it was completely destroyed, No Sweat Insurance sponsored a program to help rebuild the site.

See also  How to get Gible, Gabite, and Garchomp

This continued into Season 3, where players also contributed to the revival of the iconic POI. Tilted Tower finally got its old glory back in Fortnite Chapter 3 Season 4.