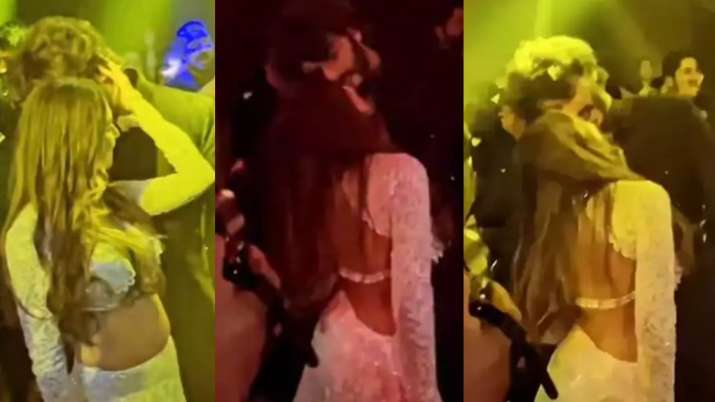 VIDEO: Malaika Arora and Arjun Kapoor owned the dance floor as the Bollywood pair grooved to Chaiyya Chaiyya. Full of energy and palpable excitement, the pair were seen doing the song’s famous hook-step at a celebrity gathering for Kunal Rawal’s pre-wedding bash. Not only this, but the pair also impressed everyone with their romantic moves as they shared a hug and exchanged glances with each other.

In the video, you initially see Malaika dancing alone before being joined by Arjun. Malaika holds Arjun’s face in her hands as the actors lean forward and the two begin to put on a performance dancing together on the hook step. Chaiyya Chaiyya is Malaika’s most famous song from the 1998 movie Dil Se. The video has gone viral on social media and fans can’t get enough of their favorite couple. Watch the video here:

Arjun and Malaika have been dating for a while now. the couple accepted their relationship in 2019 and they haven’t shunned PDA ever since. Whether posting photos from their vacations or simply admiring each other, the two are all over social media.

However, this was not always the case. Before the two made their relationship official, the Bollywood celebrities dated in private and out of the public eye. Recently, when Arjun appeared on the Koffee With Karan S7 Ep 6, Arjun shared why he took so much time to make his relationship with Malaika public. “I think I’ve lived a life on the other end of the spectrum. I grew up in a disjointed family, and it wasn’t easy to see what was going on, and still have to accept everything. I can’t just jump on her (Malaika) The first reaction might be ‘What do you mean?’ If you let people in, they’ll understand,” he said.

“I will always think of everyone first. It is my choice to be with her, but I cannot expect everyone to understand. It must be allowed to grow. I cannot expect everyone to understand it easily. Darja dena padta hai, and I had to get everyone involved, including the public eye. It’s not that we as a couple haven’t talked about it. But there are small steps. There is a basic understanding that she’s had a life, that she has a son and I’m from a past that is aware of that. You can’t dictate the moral compass of the country,” Arjun explained.

Are Arjun and Malaika getting married soon? Well, just not yet. The actor said he is looking for a more stable acting career before being paired up.