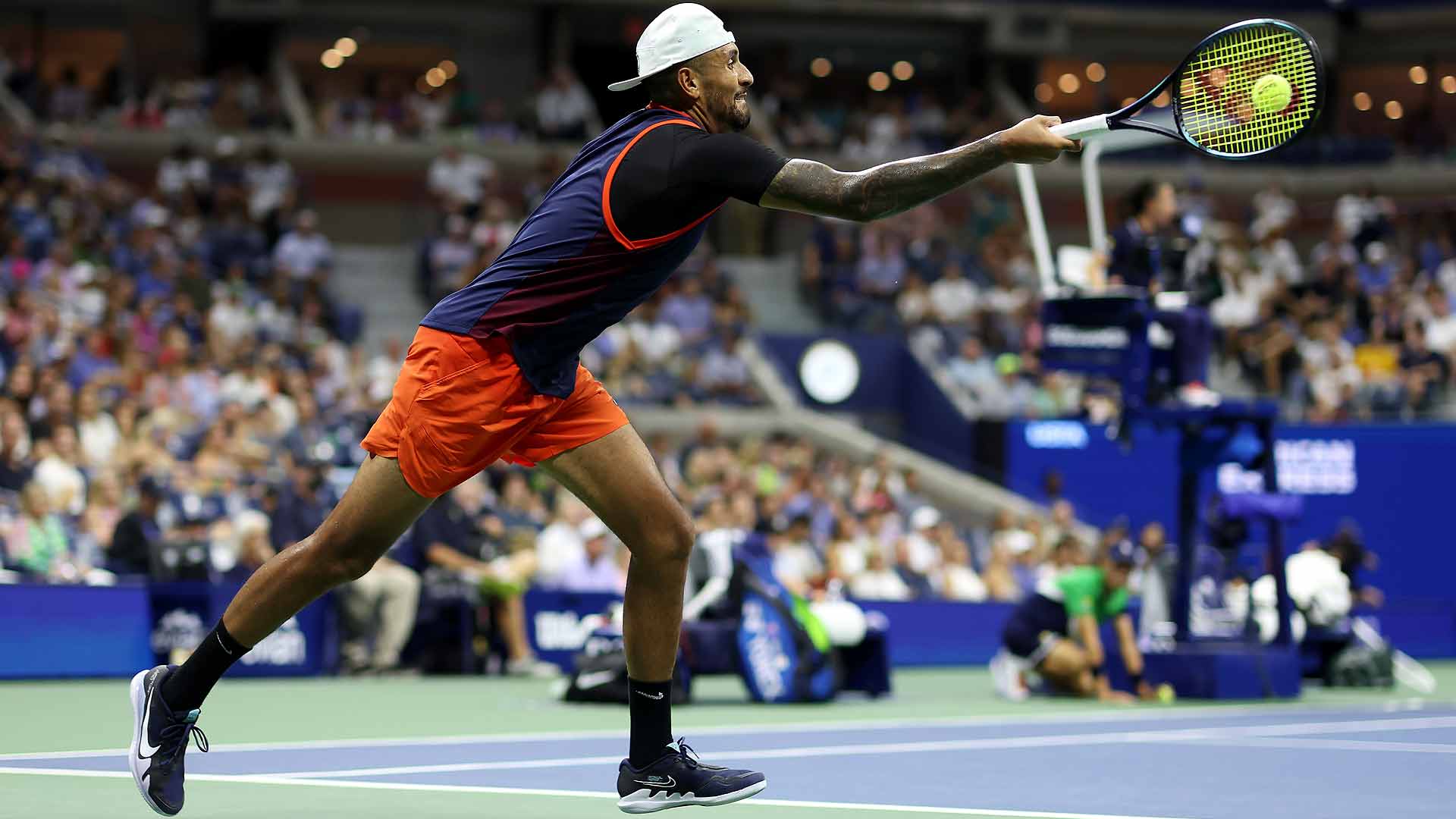 Nick Kyrgios stunned defending champion Daniil Medvedev 7-6(11), 3-6, 6-3, 6-2 at the US Open on Sunday night with a stunning performance, reaching the quarterfinals at Flushing Meadows.

The 23rd seed went into the game with a 3-1 ATP Head2Head lead against Medvedev and in the best form of his career, but it was a whole new challenge to knock out the leading group at a Grand Slam. The Australian passed the test with flying colours, playing his aggressive game to prevail after two hours and 53 minutes.

“What a place to do it,” Kyrgios said. “Packed house in New York!”

Medvedev loses his first place in the Pepperstone ATP Rankings after the US Open on Monday. Rafael Nadal, Carlos Alcaraz or Casper Ruud become the number 1 in the world. Kyrgios advances to his first quarterfinal in New York, where he then takes on Karen Khachanov.

“I want to go all out,” Kyrgios said. “Hopefully it’s possible.”

The match was less about Medvedev’s poor playing – he made just 19 unforced errors – and more about Kyrgios shining in the spotlight. The crowd favorite fired 21 aces and made 53 total winners to seize the opportunity. He visited the net to put pressure on Medvedev and won 62 percent of those points.

Kyrgios emerged victorious despite a blunder in the third set that would have thrown many players for a loop. The 27-year-old cost himself a breakpoint opportunity by illegally touching a ball on Medvedev’s side in an attempt to entrance the crowd. Rather than let the mistake happen to him, Kyrgios kept his cool and found his best tennis of the tournament past the top tier.

This year’s Wimbledon finalist and Citi Open champion overpowered Medvedev and never allowed him to feel comfortable. The 2021 champion so often confuses opponents with his devastating mix of big serve and relentless defending. But when Nick posed the “Kyrgios question” in front of a rowdy crowd, Medvedev found few answers.

The match started quickly with both gentlemen playing sensational tennis. Former world No. 1 Andy Roddick was among those who gave his opinion on social media, tweeting, “This is great stuff. Super high level. Heavyweight fight.”

The pair clashed in Montreal just weeks ago, where Kyrgios triumphed in three sets. He backed that win with a sensational performance in front of a packed crowd. After hitting his 21st ace, Kyrgios barely celebrated, knowing there is still work to be done in New York.

“I’m just happy to finally show New York my talent,” Kyrgios said. “I didn’t play great tennis” [in the past] to be honest… it took me 27 years.”

After Kyrgios put his showmanship forward early and tried to rally the fans, Medvedev did the same, often encouraging fans at Arthur Ashe Stadium to wave louder. Early on, Medvedev showed a different return strategy than in Canada, much closer to the baseline. Later in the first set, he would mix it up to make his big serving opponent look different.

The defending champion overcame an early break deficit to push the set to a tie-break in which he left a 3/5 rally to earn three set points. On the third of those set points, at 8/7, Kyrgios hit a tricky backhand volley that just broke the singles line.

Kyrgios put the pressure on from there, using his drop shot to great effect in the closing stages of the tiebreak. At the set point he converted, the Australian faked a drop shot, which led to a missed pass by Medvedev.

Kyrgios, however, was unable to maintain his momentum due to a poor opening service game in the second set. Medvedev took full advantage, grabbed an immediate break and took the lead 5-1. The set got complicated as the Australian regained his focus, but Kyrgios long missed a neutral backhand to allow his opponent to level out the clash.

Early in the third set, Kyrgios made what could have been a critical mistake. Leading 1-0 and 30/30 on Medvedev’s serve, the 23rd seed rushed around the net and hit a ball that wouldn’t land anywhere close to the net. If a ball does not land on your side of the net and spins back to your opponent’s side, you are normally not allowed to touch the ball on that side.

Kyrgios held up a finger to celebrate, thinking he’d just earned a spot on the highlight reel. Instead, the point went to Medvedev, who escaped the game. Although that seemed to be a critical point, the action proved otherwise.

The 23rd seed broke from 40/0 behind in Medvedev’s next service game and served the rest of the set without a hitch. From the moment of his blunder, Kyrgios dominated with his big serve and Medvedev was never at ease.

The Australian earned another early break in the fourth set and was determined to hold on to it. Kyrgios broke service five times in his win and saved five of the eight break points he faced.