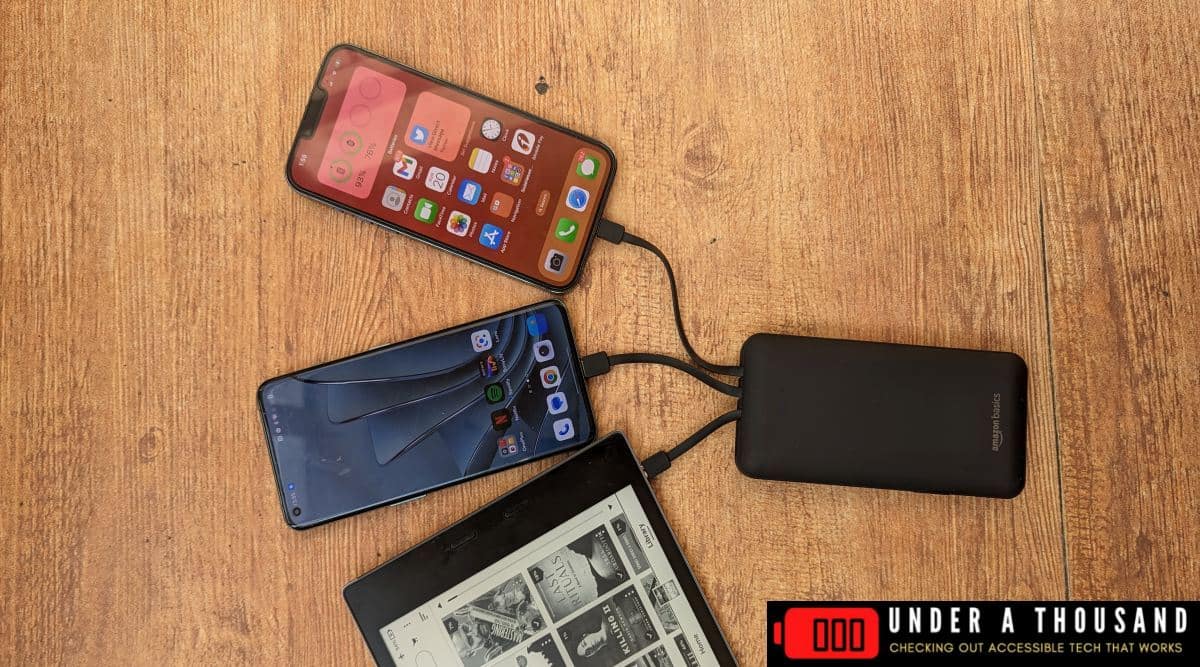 As the number of gadgets in our lives increases, so does the need for power sources to charge them. No wonder a power bank has become almost as necessary for many of us as the devices it charges. But with multiple devices comes not only the need for multiple outlets, but also the need for multiple charging cables. While carrying a power bank is easy, carrying a number of different cables to charge these different devices can be a rather twisted affair (pun intended).

And things get very complicated if the devices you own have different power outlets – for example, an iPhone has a Lightning port, most Android phones have USB type C ports, while a number of cameras and headphones still come with micro USB connectors. As a result, a person’s bag can often also contain a tangle of charging cables (most charging cables are usually a few feet long, making them extra tangled). Yes, there are also power banks with support for wireless charging, but then they are often expensive and you can only charge one device at a time, and not too quickly.

That’s why we like the Amazon Basics 10,000mAh Lithium Polymer Power Bank. At the time of writing, it was on sale for Rs 1,099, but we’ve seen it dip into the sub-thousand category a few times. Whether it’s anything above or below a thousand, we think it’s a great deal for anyone who wants a power bank that can charge multiple devices for a price close to Rs 1,000 and who wants to save the hassle of having to buy some charging cables.

The power bank with cables incorporated into it

On paper, this power bank seems a bit mundane. The capacity is useful without being exceptional and while it can charge four devices, the maximum charging speed of each connection is around 10W. You can get portable power banks that charge at 18W for about the same price. So you may be wondering what makes this one special.

The answer is the fact that this Amazon Basics power bank not only comes with the ability to charge four devices at the same time, but also comes with three charging cables already attached to it: a lightning cable, a USB type C cable and a micro- USB cable. These cables do not dangle from it, but fit exactly into the slots on the back of the power bank. There is also a USB Type A port that can charge devices, and a USB Type C and a micro USB port to charge the power bank itself. There’s also a built-in phone stand that can be extended to support a device if needed. You also get a USB to micro USB cable in the box. So you can actually just take this power bank with you and forget about lugging cables.

There’s even a kickstand built in that can be used to watch videos while charging. (Image credit: Nimish Dubey/Indian Express)

The Amazon Basics 10,000 mAH lithium-polymer power bank is built tough rather than stylish. It is made of plastic with a matte, non-glossy finish and has a rectangular shape with a front and back that slopes slightly towards the sides. The front has Amazon Basics branding and four indicator lights to notify you of charge levels. On the top left is a button to turn the charger on and off, while on the top right is a micro USB port and a USB type C port. On top is a regular USB(A) port. The top also sees the starting point of the three flat charging cables that are located on the back of the power bank. The back also has what looks like a button, but that’s actually the point from which you extend the phone mount.

At 144 mm, the power bank is slightly shorter than most smartphones, but considerably thicker at 21 mm. At 234 grams, it’s about the weight of the iPhone 14 Pro Max. It can slip into a pocket, but we recommend carrying it in a bag due to its thickness and weight. It can have a matte finish but is prone to staining and attracting dust. However, it feels reassuringly solid. 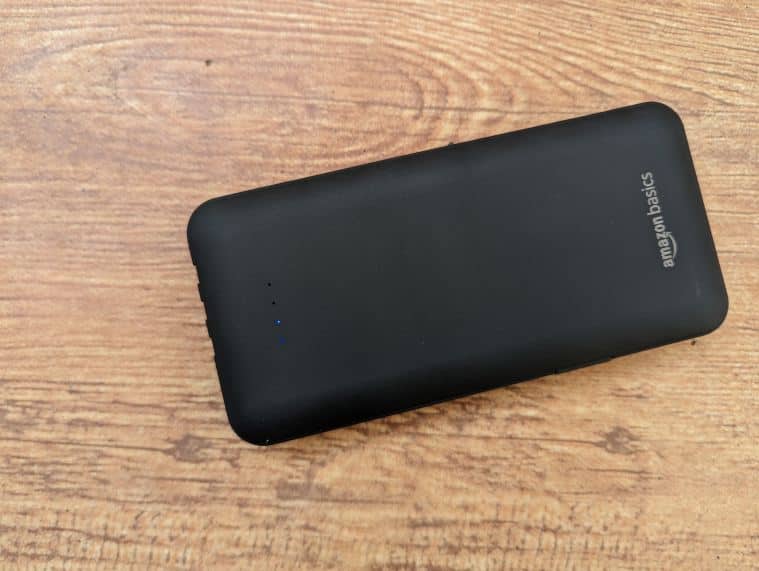 Best of all, it actually works really well if all you’re looking for is freedom from lugging cables. Three connected cables allow you to charge any mobile device: a Lighting port (an iPhone, AirPods, older iPads), a USB type C port (most Android phones and newer cameras and earphones), and a micro USB port (some cheap Android phones). devices, many cameras and headphones). And if you have a USB to Type C/lightning/micro USB cable with you, you can also charge a fourth device via the regular USB port on top of the power bank. The cables that come with the power bank come in different lengths, so if you charge devices on each of them, they generally won’t get in each other’s way. The connected cables are also short and flat, so that the problem of tangles does not arise, and they fit very well in the back of the power bank.

The mobile stand doesn’t slide out smoothly or slide back into place very smoothly, but is great for propping up a device to continue using it while charging. So you can continue your video call or watch a World Cup match even while the phone (the stand can’t hold anything bigger than a phone) is charging.

Don’t expect super-fast charging at any stage – all four outputs max out at 10W, which is pretty handy enough, but not in the “zero-to-peak charge in less than an hour” zone. For example, it would take more than three hours for an iPhone 13 to be charged by this power bank. Charging the power bank itself also takes quite a long time – about 5-6 hours. But we think that’s a small price to pay for what it delivers at an equally low price. Amazon also claims it’s safe to use and comes with “over-current, over-voltage, and short-circuit protection, with a built-in function to shut down in case of overheating.” We had no issues with the heating while using the power bank, even with three devices connected to it – it did get warm while it charged itself, but never unpleasantly. 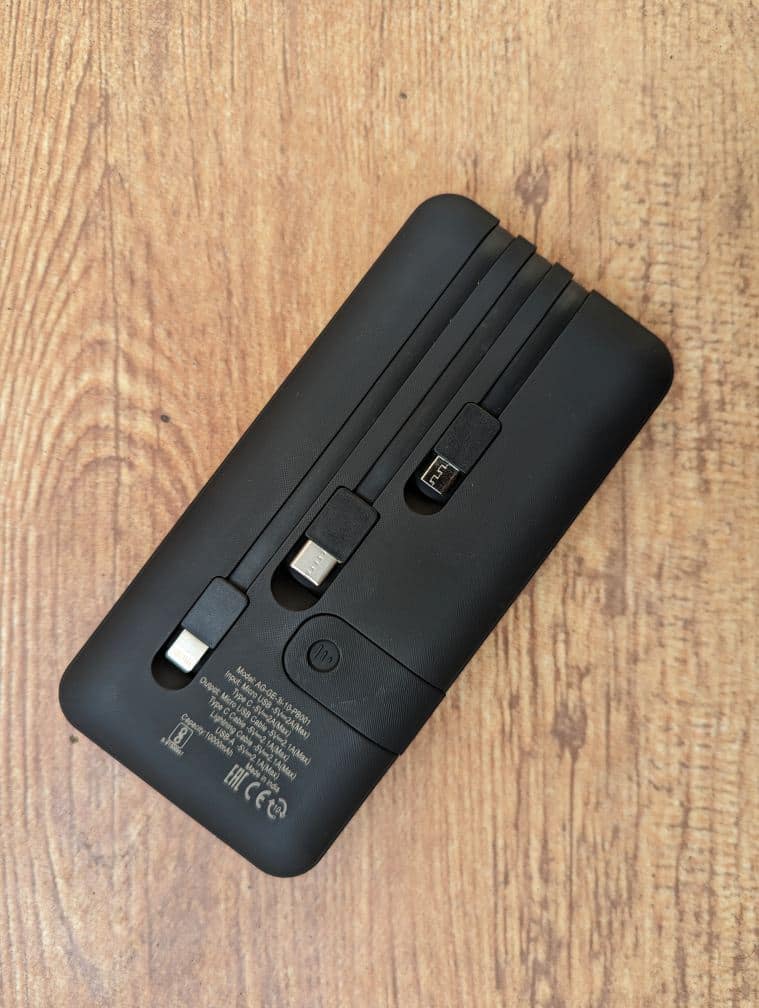 Not perfect, but perfect value for money for multi-device users

The Amazon Basics 10,000mAH lithium polymer power bank has its flaws – the charging isn’t the fastest, as we’ve noted, and while we’ve had no issues with the cables attached, there’s a chance they could become frayed where they attach to the power bank are confirmed. And well, if you don’t have a micro USB device, one of the cables ended up being thrown away. The mobile stand is handy but does not slide out too smoothly. And for those who want a power bank that looks snazzy, well, this one is strictly about function rather than form.

That said, for around Rs 1,000, the Amazon Basics 10,000 mAH Lithium Polymer Power Bank brings a lot to the charging table. Its greatest asset is that it does not have to carry around different cables and that it has a decent capacity. For its price, we think it’s the perfect power bank for those who want one bank to charge all their devices without the hassle of carrying cables for each, and aren’t too concerned with fast charging. Definitely worth a purchase for anyone who suffers from multiple devices with multiple charging ports!

You can get the Amazon Basics 10,000mAH Lithium Polymer Powerbank from

SBI has $2.6 billion of loans to Adani Group