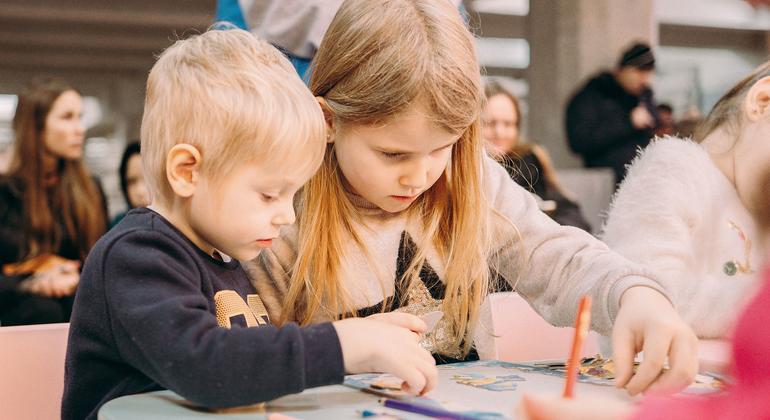 He called on countries to deliver education systems “that can support equal societies, dynamic economies and the boundless dreams of every learner in the world.”

Data from the United Nations Educational, Scientific and Cultural Organization (UNESCO) shows that some 244 million boys and girls will still be out of school this year.

In addition, 70 percent of 10-year-olds in low- and middle-income countries cannot read and understand a simple text.

The theme of this year’s International Day is “investing in people, prioritizing education”.

Special attention is paid to girls and women in Afghanistan who have been denied access to secondary schools and universities in the aftermath of the Taliban takeover in August 2021.

The Secretary-General said that education is a fundamental human right and the foundation of societies, economies and everyone’s potential.

However, he warned that this potential will “wither on the vine” without sufficient investment.

“It has always shocked me that education has been given such a low priority in many government policies and instruments of international cooperation,” he noted.

A new look at the classroom

Mr Guterres recalled that at the Transforming Education Summit last September, countries came together to “reinvent education systems so that every student has access to the knowledge and skills needed to succeed”.

More than 130 countries have made commitments to ensure universal quality education becomes a central pillar of public policy and public investment.

The results of the summit include a call to action on education investment and the establishment of the International Finance Facility for Education.

Several global initiatives were launched there, including to mobilize support for education in crisis situations, education for girls, transforming education and ‘green’ education systems.

“Now is the time for all countries turn their commitments at the summit into concrete actions that create supportive and inclusive learning environments for all students,” said Mr. Guterres.

“Now is also the time to end all discriminatory laws and practices that hinder access to education,” he added.

“I call the de facto authorities in Afghanistan in particular reverse the outrageous and self-defeating ban on access to secondary and higher education for girls.”

UNESCO has dedicated the International Day of Education to all girls and women in Afghanistan who have been denied the right to learn, study and teach.

“The organization condemns this grave attack on human dignity and on the fundamental right to education,” director-general Audrey Azoulay said in a statement.

Currently, 80 percent, or 2.5 million school-aged Afghan girls and young women are out of school. This includes 1.2 million who were banned from high schools and universities following the decision of the de facto authorities.

Ms. Azoulay reported that her agency continues to work in Afghanistan, working closely with local communities, to ensure that education can continue, either through literacy courses or through radio.

“UNESCO also remains the primary source for monitoring education data in Afghanistan, especially data related to higher education. We shall go on mobilize the international community to uphold the right of Afghan girls and women to education,” she added.

Other UN agencies and senior officials have expressed support for the universal right to education.

The UN High Commissioner for Human Rights, Volker Türk, took to Twitter to urge governments to ensure everyone has a chance to learn.

“There is no excuse for holding #education hostage,” he said wrote. “It is a fundamental human right – NOT a privilege – and a powerful investment to end poverty, promote justice, promote sustainable development and build (world) peace.”

This has been recalled by the UN humanitarian agency, OCHA nearly 200 million crisis-affected children and adolescents not going to school or not learning.

OCHA tweeted that “especially in times of crisis, education should be given priority, so that no one is left behind!”

In a separate tweet, the agency underlined that “women and girls in Afghanistan belong in schools” with the simple message “Let women and girls learn”.

OCHA Chief Martin Griffiths is currently in Afghanistan, along with senior UN and NGO leaders, to investigate the aftermath of the Taliban’s ban on Afghan women from working with local and international humanitarian agencies, announced last month.

The decision has led to the suspension of some aid operations and raised fears that the dire humanitarian situation in the country will only worsen. This year, 28.3 million people, two-thirds of the population, will need urgent help.

The visit follows a UN mission last week led by the organization’s top female official, Deputy Secretary-General Amina Mohammed, focused on the impact of the humanitarian ban in an effort to advance the rights of women and girls and to protect.

See also  Postbiotics require another round of consumer education

“We have witnessed extraordinary resilience. Afghan women left us in no doubt about their bravery and refusal to be erased from public life. They will continue to advocate and fight for their rights, and it is our duty to support them in doing so,” said Ms. Bahous.