Toyota Reboots Strategy, Doubles Down On Its Hybrid Bet In India 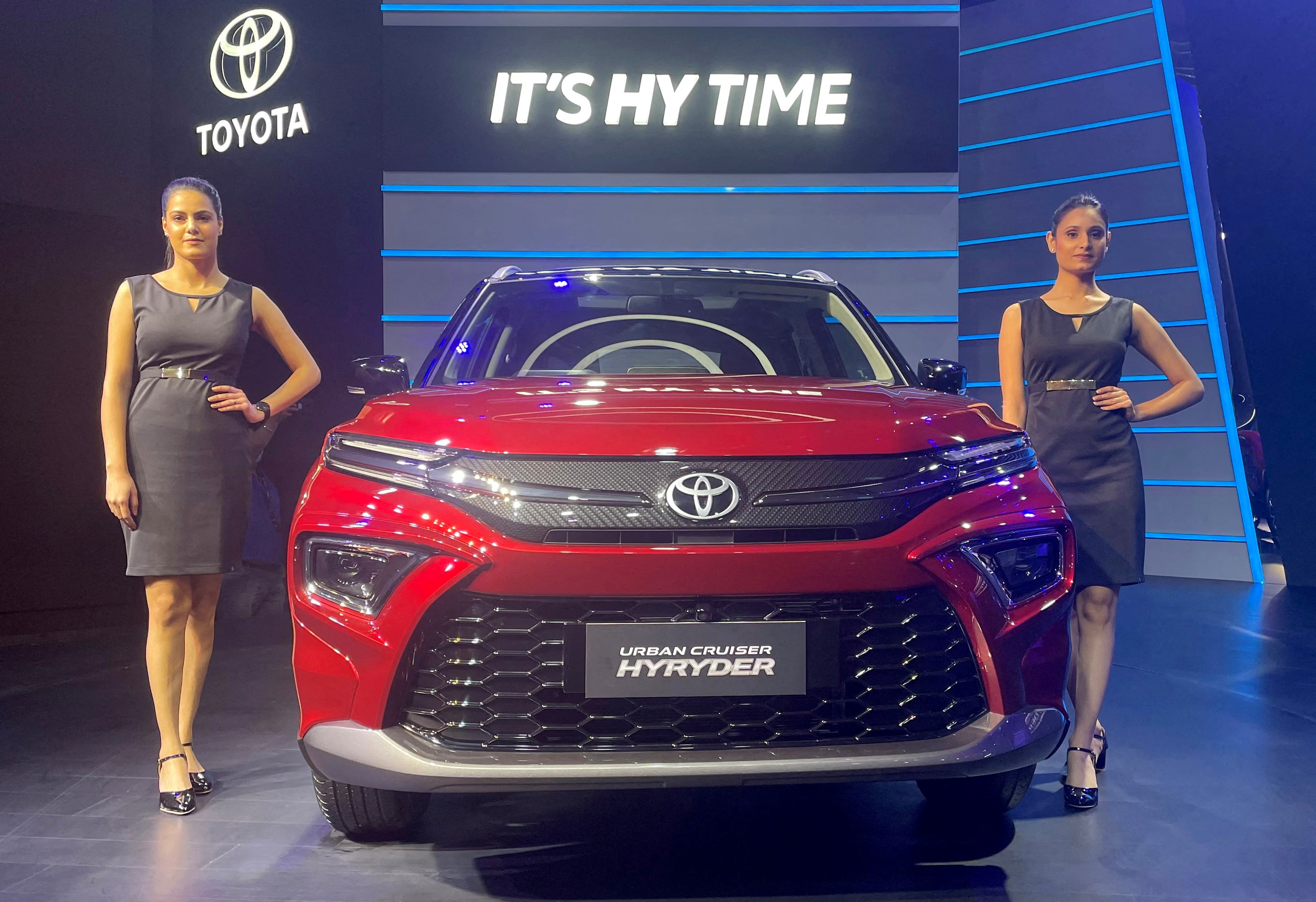 Toyota is restarting its strategy for India, doubling its bet that emerging markets will learn to love its hybrids, as long as the price is right.

Known for its groundbreaking Prius, the Japanese automaker has struggled to sell large numbers of its hybrid Camry sedan since its Indian debut in 2013, in part due to a sticker price of more than eight times the annual income of a middle-class family.

This time, Toyota is determined to do things differently with cheaper hybrids, said four company and industry executives and suppliers who provided previously unreported details about the automaker’s sourcing, production and pricing strategy.

At the heart of the strategy is the drive to reduce the cost of all-hybrid powertrains by making them in India, where the automaker’s plants are well below capacity, and to source key materials in the country.

“The hybrid bet is a turning point. It will be a litmus test for Toyota’s future and success in India,” a person with direct knowledge of Toyota’s plans told Reuters.

A full hybrid can drive long distances electrically, while mild hybrid technology only supplements the combustion engine to reduce emissions. Mild hybrids, however, have smaller batteries and cost much less.

Toyota’s Indian strategy is at odds with global rivals Volkswagen, General Motors and India’s Tata Motors, which are rushing to roll out pure electric vehicles (EVs), and has been criticized by investors for sticking to fossil fuel hybrids.

Hybrids are generally cheaper than EVs as they tend to have smaller batteries and do not rely on charging stations, important factors in markets such as India, where customers are price sensitive and charging infrastructure can be patchy.

The world’s largest automaker told Reuters it wanted more new buyers in India to own full hybrids as a first step towards mass electrification, and that it would continue to increase local sourcing and production to be competitive.

Toyota’s first new hybrid to hit Indian roads is the Urban Cruiser Hyryder, a compact SUV (sport-utility vehicle) that two people with knowledge of the plan said will likely cost around $25,000 — less than half that. of the price of the Camry.

That would rival popular midsize combustion SUVs from Hyundai Motor and Kia Motor in a fast-growing segment that accounts for 18% of car sales in India, the world’s fourth largest car market.

However, the fully hybrid Hyryder will be 31% more fuel efficient than the Hyundai and Kia diesel models, with an economy of 28 km per liter (65 miles per gallon), a key benchmark for Indian buyers.

To bring down the cost of the Hyryder, which will be sold by Toyota and Suzuki, it will use a hybrid system originally developed for subcompact cars, or one size smaller, according to a Toyota engineer familiar with hybrid technology. .

Combining the hybrid system with an inexpensive chassis and some Suzuki body parts, the end result is an SUV that is comparable to or slightly cheaper than the Prius sedan, which starts at $25,000 in the United States.

“The expensive complexity of hybrids is hard to overcome, but it’s a good start,” said the Toyota source, who was not involved in the development of the Hyryder.

Savings have also been made by partnering with Suzuki to design and develop the SUV, as well as leveraging its scale and pricing power with suppliers from Maruti, which produced eight of the 10 best-selling models in India in 2021.

Still, there is a $3,400 cost difference between Toyota’s full hybrid and its comparable petrol car in India, another source said, higher than the typical $2,000 difference for Toyota in most countries.

To boost sales in India’s price-sensitive market, Toyota will also sell Hyryders with a mild-hybrid powertrain supplied by Suzuki, a key entry point for Toyota, which has long championed full hybrids.

The shift is an acknowledgment that Toyota has failed to cut the cost of full hybrids to the point where they can always compete on price in markets like India, said those familiar with Toyota’s planning.

It also shows how Toyota is adjusting its strategy for different markets depending on what buyers want and are willing to pay.

“As we lower the price … we hope to increase both our numbers and market share,” Vikram Kirloskar, vice chairman of Toyota Kirloskar Motor, the Indian unit of the Japanese company, told Reuters.

Toyota’s next hybrid for India will be a multi-purpose vehicle, or passenger car, expected later this year or early 2023, two sources said.

Another factor that affects the price of the Hyryder is the tax. India levies taxes of 43% on hybrids – comparable to petrol or diesel SUVs and much higher than the 5% tax on EVs.

Toyota is lobbying to cut taxes, sources say. The company said it wants New Delhi to provide support, including taxation, to all green technologies that help India achieve its goal of reducing fossil fuel and carbon emissions.

So far, the government has shown no interest in extending its fiscal support beyond EVs.

Making hybrid powertrains in India brings Toyota in line with Prime Minister Narendra Modi’s drive to boost local production, especially at a time when major car companies such as Ford Motor have left the country.

It also comes as India tightens fuel efficiency and emissions targets for automakers. The sale of hybrids will help Toyota meet its legal requirements, as the credits they earn will be used to offset the production of fossil fuel vehicles.

At the Toyota Kirloskar Auto Parts plant in Bidadi, an industrial city near Bengaluru in southern India, the Japanese automaker’s new Indian strategy is already underway.

The E-Drive provides seamless switching between the engine and the electric motor, and moving production of one of the four key components of the hybrid system to India is a big step.

Toyota sees the Bidadi plant as a starting point for building a local supply chain for the EVs it will eventually bring to India.

“We now have the core technology, be it an electric vehicle or a hybrid,” Kirloskar said.

The factory can make 135,000 E-Drives per year on one assembly line and could increase that number to more than 400,000 by adding two more.

About 55% of the value of the raw materials for the E-Drives comes from India, according to two sources. Capital equipment, such as tools and dies, are also made there, although rare-earth magnets for the motors and some other components are imported.

Cost savings on India-made e-drives are expected to be in “double digits” in percentage terms compared to imported systems, a source said.

Toyota will also export them back to Japan for hybrid cars built there, as well as to countries in Southeast Asia.

“India is one of the lowest cost centers for these parts. We are competitive on this,” Kirloskar said, adding that he expected about 40% to 50% to be exported, although that could change depending on local demand.

Of the three other main hybrid components, Toyota already makes engines in India, but the 1.8 kilowatt-hour (kWh) lithium-ion batteries and power control units will be imported for the time being.

Toyota makes the Hyryder at its underutilized and revamped Bidadi plant, which has an annual capacity of 200,000 cars.

More than 50% of Hyryder’s pre-orders are for the full hybrid, although those in the know of Toyota’s production plans say this could reach 30% to 40% as the cheaper, milder hybrid grows in popularity. is in India – where most cars for less than $15,000.

“Once the numbers rise, costs will get to a point where hybrids will become mainstream. This will lay the groundwork for an eventual move to all-electric or fuel cell vehicles,” said a person familiar with Toyota’s plans.

“It’s a huge gamble, but we know electrification is the future.”