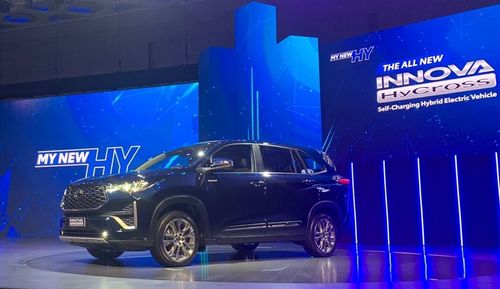 Toyota India has wrapped up the highly anticipated Innova Hycross, which is likely to be positioned above India’s Innova Crysta and sold alongside Japan’s bread and butter MPV. The new Toyota Innova Hycross is a huge step forward in every way compared to the Innova Crysta and is supported by Toyota’s modular TNGA-C:GA-C platform. In fact, it has a self-supporting construction instead of a ladder-on-frame body, which has led to a weight reduction of 200 kg, with power going to the front wheels. Yes! The supreme Innova is now front-wheel drive (FWD).

The Toyota Innova Hycross will be in dealerships in mid-January 2023, with prices expected to be announced closer to that date. Bookings for the Innova Hycross start today. It will be offered in both petrol and strong hybrid model and both will get 4 variants each.

Starting with the looks, the Hycross certainly looks a lot butch, with a true SUV-style front end, featuring the new hexagonal grille with chrome edges, slim LED headlights and a muscular front bumper with large vents and slim LED daytime running lights. . The SUV-like design also comes into its own at the sides, thanks to flared wheel arches, 18-inch alloy wheels, underbody trim and muscular character lines. The Hycross also comes with two-tone ORVMs with integrated LED turn signals and more blacked-out elements.

The Toyota Innova Hycross will arrive at dealerships in mid-January 2023, with bookings starting today.

At the rear, the flat design of the van line has been replaced by a more sculpted design. The Innova Hycross also gets slimmer wraparound LED taillights with combination lamps and a slightly more curved rear window with wiper. In terms of dimensions, compared to the Innova Crysta, the Hycross is 20 mm longer and wider at 4755 mm and 1850 mm respectively. While the height remains unchanged at 1795mm, the wheelbase has been increased by 100mm and now stands at 2850mm.

The cabin of the 2023 Toyota Innova Hycross is very modern compared to the cabin of the Crysta. It offers a new, more modern layout, draped in an all-black or black-and-brown two-tone interior trim. The dashboard features a new free-standing 10.1-inch infotainment screen, a new multi-function steering wheel and a digital instrument cluster. The gear lever is positioned higher on the center console and you also get features such as an electronic parking brake and a hill-hold button. As for other features, the Innova Hycross gets second row captain seats with footrests, connected car technology, with over-the-air (OTA) updates, a panoramic sunroof, relocated roof-mounted vents, wireless charging, ventilated seats and mood lighting, among other things.

At the rear, the Innova Hycross comes with power reclining Ottoman seats.

In terms of safety, the new Innova Hycross comes with Toyota’s Safety Sense 3.0, which includes technology such as Adaptive Cruise Control and Lane Trace Assist, Auto High Beam and Blind Spot Monitor. Other safety features include six airbags, three-point seatbelts for all passengers, ABS, EBD, reversing camera and more. The new Innova also gets disc brakes on all four wheels as standard. He also gets an electric tailgate, which can be opened via voice commands.

Under the hood is the new 5th generation TNGA 2.0-litre four-cylinder hybrid petrol engine, along with a regular 2.0-litre petrol engine. The powertrains are mated to an eCVT and a regular CVT automatic transmission respectively. The hybrid model offers a fuel consumption of 21.1 kmpl. In principle, the Innova Hycross is equipped with two electric motors in addition to the engine. The first motor provides electric roll during launch, while the second or larger motor assists the motor and charges the battery through regenerative braking. The Innova Hycross accelerates from 0 to 100 km/h in 9.5 seconds. Toyota will continue to sell the Innova Crysta diesel engine in India.

The new Innova Hycross is likely to further strengthen Toyota’s position in this segment, competing against the Mahindra XUV700 and Tata Safari while offering a somewhat more affordable alternative to the Kia Carnival.