Teachers’ Day 2022: From Youtube channels to holding classes under a flyover, meet six teachers who have pioneered education in their own ways From a teacher in Punjab who started a YouTube channel to make math accessible to a teacher in Gujarat who has introduced an approach to help students make decisions at all administrative levels in their school, The Indian Express spoke to teachers who have made a difference.

The ‘school’ under a bridge in New Delhi

Rajesh Kumar, 52, has been teaching out-of-school children under an overpass in Delhi for 15 years.

Kumar’s informal school, which he calls “The Free School Under the Bridge,” operates under the overhead tracks near the Yamuna Bank subway station. It is suitable for children of the farming community in the area.

The school started in 2007 with about 60 children. When the initiative first started, Kumar’s focus was on educating non-enrolled students and helping them gain admission into the government schools in the Shakarpur area.

“Now there are about 250 students: 150 girls in the morning shift and 100 boys in the afternoon shift. When I started, it was just me. But now there are four other teachers who are teaching on a voluntary basis,” said Kumar.

A significant number of children currently attending are already students who come to attend free classes. However, children are still being prepared to enter mainstream schools in an age-appropriate class. This year, about 40 children will be admitted to regular schools.

For a government-run primary school in the Pasthepada tribal village in Maharashtra’s Thane district, the digital transition went smoothly during the pandemic. This was all thanks to Sandeep Gund, a teacher, who had transformed the local Zilla Parishad school with an all-digital approach even before the regular electricity supply arrived in the village.

In 2009, when Gund was hired at the school, he started using foldable solar panels to charge his laptop, kick-starting engineering learning for students. Later he bought two tablets.

Gund continued to crowdsource money and seek funding from companies to include e-learning and 3D technology among other things in his teaching methodology.

Students at his school no longer carry bags. A solar-powered tablet, consisting of all the necessary materials, and a digital pen are all they need.

Widely known for pioneering the format, about 40 schools in the area initially replicated it. At present, the model is being followed in 40,000 schools, not only in Maharashtra, but across the country.

Today, Gund serves on several committees for the digitization of education and is currently working closely with the Maharashtra Government’s Department of Rural Development to create the state’s first futuristic classroom.

“A few tech-savvy Zilla Parishad teachers have partnered with me to set up an organization that provides technical support to the government. No private school in the country has such a concept. We will have created interactive screens where teachers develop their own content, share it live with children… Models can be inserted and 3D simulation can be done. Exams can take place online through gamified ways and much more,” he said.

The initiatives of Rakesh Patel, the director of the Nava Nadisar Prathmik Shala in the Panchmahal district of Gujarat, changed an entire village. Popularly known as “Masti ki pathshalaThe tribal village government school, made up of day-wage workers, is run entirely by students. Every decision – from the school building to the day-to-day management – ​​is made by them. Recently, they even chose colors for uniforms and called it rainbow shape.

Instilling responsibility and confidence in its students, the school has undergone a transformation for the village, with people taking more and more responsibility to participate in social events. Students of the schools are now graduates, post graduates and job holders. 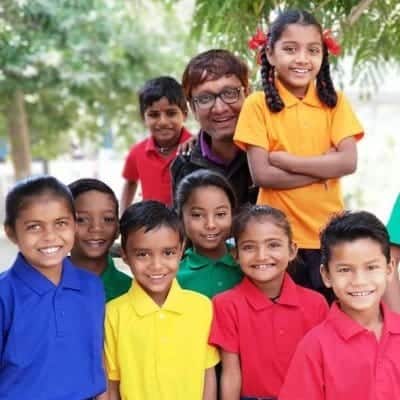 “With a sense of belonging among villagers, who now understand the importance of education and its power, the school has successfully brought about social change in parents with 100 percent enrollments, both boys and girls,” Patel said.

Sarita Bharadwaj, 59, had three other jobs before becoming a teacher. She worked as a stenographer at the Delhi High Court for 10 years. But teaching is where her heart was. After her marriage, she decided to give her B.Ed. When the Covid-19 pandemic hit, Bharadwaj, along with other teachers at the public school in Paschim Vihar, had no means of reaching their students. “The schools closed. We could barely get hold of the teaching materials and class lists,” she says.

Bharadwaj managed to find contacts of some students in her previous classes by messaging on regular WhatsApp groups. She appointed her nearby supermarket delivery man to check the addresses of these 6th standard students.

Most of her students’ parents were day laborers and did not own smartphones. So she copied a month’s worth of worksheets for some students. “I called the students in the evening, after 9-10pm, because then their parents would come back from work for the day and the kids would have access to the phone to clear their doubts,” she said.

Her husband’s death in November last year was hard on Bharadwaj and even considered quitting her job. “My kids convinced me to keep my job and I’m grateful for the kids I meet at school,” she said.

In April, photos of a traffic sergeant helping an eight-year-old with his study went viral. A boy was seen taking notes on a plastic sheet while Sergeant Prakash Ghosh supervised his work with a stick next to him.

Akash Routh, his student, had lost his father and grandfather during the pandemic. Financial stress was high and during the second lockdown, his mother started selling food at their roadside eatery. He had to help in the shop, leaving little time for study.

Sergeant Prakash Ghosh 38, working under the South East Traffic Guard of the Kolkata Police Department at his place of work near Gariahat ITI in Kolkata on Friday 02 September 22. Express photo by Partha Paul.

“I used to be there for work. One day she (Akash’s mother) complained to me that she had great expectations, but after the two deaths in her family, her son helped her in the shop and did not study at all,” Ghosh said, adding: “So, while my official duty, I always guided him,” Ghosh said.

Ghosh hails from Jangipur in the Murshidabad district of the state which is more than 250 kilometers away from Kolkata. He travels home once a week.

‘I get to see my three-year-old son one day… I can’t teach him anything. When Akash’s mother told me he doesn’t focus on studies, I took charge.”

Recognizing that opportunities for equal educational experiences may not exist, Ghosh said small efforts can bring about change. “I intend to make a difference in the lives of the children I meet along the way,” he said.

Arun Kumar Garg, 39, is the principal of a government model school in the village of Datewas in the Mansa district of Punjab. During the Covid-19 pandemic, Garg started a YouTube channel called “Abhyaas by Arun sir” to provide free math lessons in Punjabi. The channel currently has over 11k subscribers.

In addition to YouTube, he also delivered 163 lectures on DD Punjabi, the NCERT’s Swayam and e-Vidya portals during the period to make the subject easy for students.

As his channel’s tagline “Now math is easy with Arun” suggests, he has always had an activity-based approach to teaching. He has also created several learning-based models at this school: a Roman wheel for learning Roman numerals, VeDiMa for Vedic multiplication, 3D math, among others.

“My only motive is to make sure students aren’t afraid of math,” says Garg, who has an MSc in the subject.

State award winner, Garg is also the author of several state and CBSE math books. He is also the founder of an initiative called Pehal that encourages and helps rural girl students to continue the science stream. He will be honored with a National Award for his efforts on Teacher’s Day in Delhi this year.