Shardul Thakur’s all-round skills make him a strong contender for India’s No. 8 spot 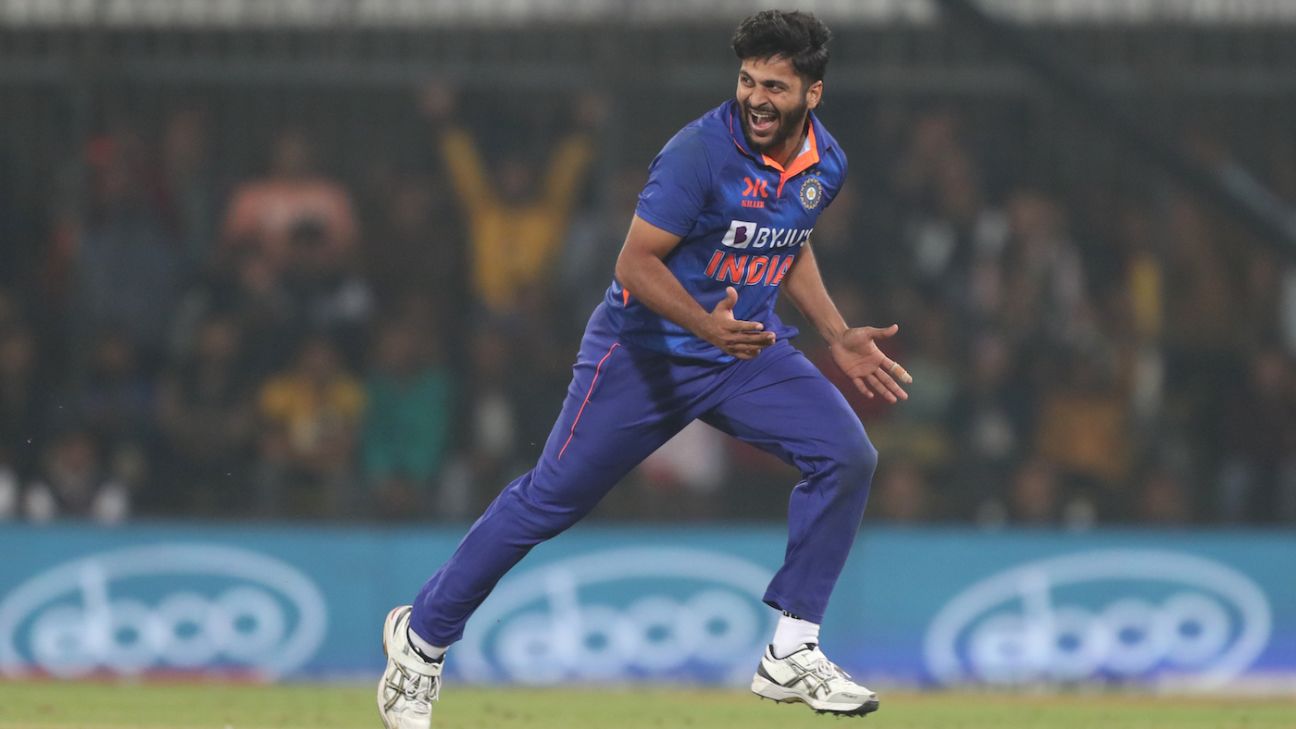 Shardul Thakur can be quite extreme. He keeps swinging back and forth between sublime and mediocre: like hitting twice in two balls and giving up two leg-side fours in the same over. His back-to-back wickets of Daryl Mitchell and Tom Latham in the third ODI at Indore brought a smile to Rohit Sharma’s face, but it was quickly replaced by a frown and an expression of frustration.

Then, in his next over, Thakur changed his captain’s mood and the course of the match for good with another wicket. Rohit, Hardik Pandya, the Indore crowd – everyone wanted a piece of Thakur now.

But India had not wanted Thakur for their previous ODI series against Sri Lanka earlier this month, despite Deepak Chahar being unfit and Bhuvneshwar Kumar dropped from the squad. They had Mohammed Shami batted at number 8 in the first ODI in Guwahati. For example, in that game, Sri Lanka had all-rounders Dunith Wellalage and Chamika Karunaratne batting at numbers 8 and 9. More recently, New Zealand had Mitchell Santner batting at number 8 and Henry Shipley at number 9.
England, currently the gold standard of white ball cricket, has a batting depth of up to No. 10 in ODIs. David Willey, who has opened for Perth Scorchers in the Big Bash League, finished No. 10 in England’s most recent ODI in November last year. You need that much depth to win world tournaments, which may be why India recalled Thakur for the ODIs against New Zealand.

Thakur is not Willey or even Chahar, who was long ago tagged as a batting all-rounder at Rising Pune Supergiant in the IPL by Stephen Fleming and MS Dhoni. But Thakur is perhaps the best option India has for number 8 at the moment. Rohit had said the same on the eve of the ODI series against New Zealand in Hyderabad.

“It’s going to be a challenge for us… to get a No. 8, No. 9 that can hit,” Rohit said. “Are [Thakur’s] skill with the bat can give us an edge at No. 8. But if you have seven good hitters who can do the job for us – whatever the situation, then you can also look at your playing combination. In India [at the World Cup]you’re going to be playing all over the country – different fields, different challenges.”

Thakur gave India a lead on Tuesday in Indore, both with bat and ball. After Rohit and Shubman Gill took ages to give India a shot at a total of over 400, New Zealand dragged them so far back that at one point they risked not scoring the 375. However, a late at bat by Thakur pushed India to 385.

Even that target didn’t seem safe when Devon Conway and Henry Nicholls hit Thakur in the power play. He kept missing his length and kept disappearing – in front of and behind the wicket – in a field where the average limit was only around 60 yards. The dew then set in, making things more difficult for the Indian bowlers. The ball slid nicely onto the bat in the evening and when New Zealand were 184 for 2 in 25 overs the chase was on.

Thakur then returned and dismissed Mitchell with a head-high bouncer. The next ball, he had Tom Latham spoon a knuckleball full throw to halfway. Thakur ended the over with two loose balls traveling for fours. In his next over, he found more bounce with an over-the-seam placement and let Glenn Phillips flutter weakly to Virat Kohli. Thakur’s variety was as delectable – and unpredictable – as the lip-smacking street food at Sarafa Bazar night market in Indore. He helped shut out New Zealand as India won the series 3–0.

Rohit, who has watched Thakur evolve from a redball cricketer in Mumbai’s maidans to a fine whiteball player, spoke highly of his skills.

“He has a knack for taking wickets at crucial moments for us,” said Rohit. “We’ve seen it not only in ODI cricket but in Test cricket. There are so many examples I remember [when] there is a partnership building the opposition and he came in and helped us through. He is very critical of us, we know where we stand as a team, what he brings to us is very critical. I just hope he continues to deliver this kind of performance and that will only benefit the team.

“He’s very smart, he’s played a lot of domestic cricket, he’s come up through the ranks and he understands what needs to be done. In this format you have to use your skills and Shardul certainly has some skills. He’s got a good knuckle ball; he bowled to Tom Latham today, that was planned nicely in the middle by few players and I wasn’t involved (laughs) It was Virat, Hadik and Shardul, so it was a good plan. at the end of the day, if a plan works for the team, we are all happy.”

It takes tremendous confidence and courage to perform such variations on a flat, bash-through-the-line Indore pitch.

“[At] at some point they will come after you,” Thakur said Star sports after winning the Player-of-the-Match award for his spell of 3 for 45 and innings of 25 from 17. At the moment I was just trying to tell myself that, ‘Okay what needs to be done, I’m going to run the same ball.’

Thakur has always been open to exploring different lengths and deliveries in all formats. When they break free, like in Indore, he becomes #LordThakur. If they don’t come off, he becomes meme material. As of the end of the 2019 World Cup, Thakur has a strike rate of 29.8, one of the best among sailors from full nations with at least 20 wickets. In the same period, his economy rate of 6.25 is the worst among seamen. Thakur is ready to embrace both the highs and the lows.

“I don’t think too much because as a cricketer you have to be prepared for all situations,” said Thakur. “You can be asked to bowl or bat at any time. And I think you’re ready [for the challenge] is the key.”

Shami had thrown a great spell in the second ODI against New Zealand in Raipur, but he might have to sit out once Jasprit Bumrah is fit again. Playing Mohammed Siraj, Bumrah and Shami along with a wrist spinner extends India’s tail. Thakur’s all-round success against New Zealand could potentially see him fit into India’s ODI World Cup plans as their number 8 batsman and third sailor.

Deivarayan Muthu is a sub-editor at ESPNcricinfo