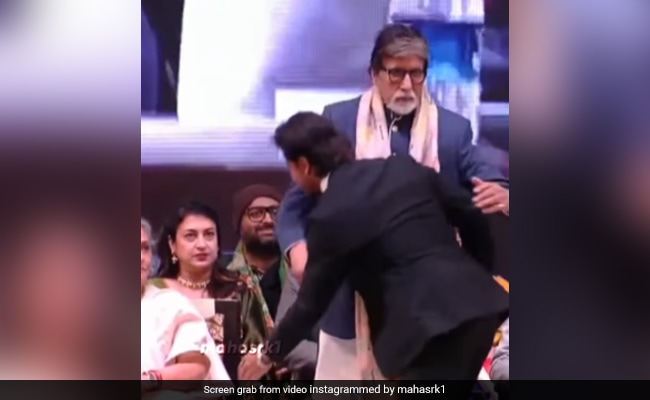 At this year’s Kolkata International Film Festival, which began on Thursday, Amitabh Bachchan and his wife Jaya, Shah Rukh Khan, led the celebrity roll call. Photos and videos from the festival are hot. One moment in particular that won hearts was when Shah Rukh Khan touched the feet of Amitabh Bachchan and Jaya Bachchan. Big B immediately hugged SRK during the event. The video was curated by fan pages on social media. Big B and Jaya Bachchan’s son and actor Abhishek also attended the event. Other celebrities at the event included Rani Mukerji, Shatrughan Sinha.

Here is a picture of SRK hugging Amitabh Bachchan at the event:

This was the second film festival that SRK attended this month. Earlier this month, he checked into the Red Sea International Film Festival in Jeddah, Saudi Arabia, where his 1995 film Dilwale Dulhania Le Jayenge was the opening film. The actor even performed an iconic scene from the festival. SRK and Kajol were there for the screening DDLJ. He was also congratulated at the event. SRK was also one of three recipients of this year’s Honorary Yusr.