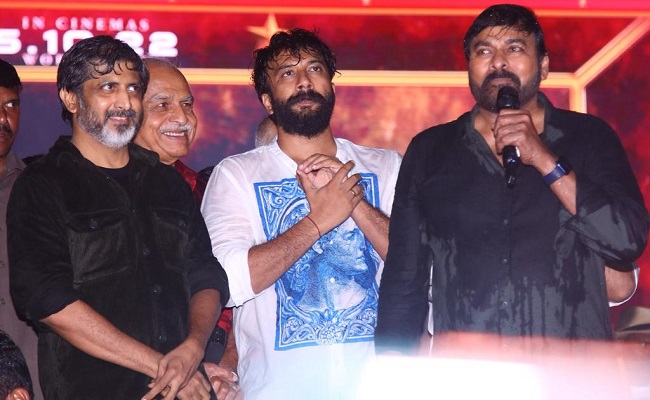 Megastar Chiranjeevi’s GodFather pre-release event has been grandly organized in Anantapur with huge turnout for the function. The crowd was unmoved, even though it rained during the function.

Superstar Krishna’s wife and Mahesh Babu’s mother Indira Devi have passed away and Chiranjeevi expressed his condolences to the relatives. He then made an interesting statement that it is raining when he comes to Rayalaseema.

“I feel the rain as a positive omen. I was in doubt whether or not I would make it to the event as I was shooting in Vizag until 2pm. I came with a special flight, so as not to disappoint you.”

“Charan thought the Lucifer remake suited my image. He also suggested the name of Mohan Raja for the project. Mohan Raja thought Salman Khan would be the right choice for the pivotal role. Charan called Sallu Bhai and he immediately nodded, without even listening to the story.

RB Choudary, along with NV Prasad, came forward to co-produce the film when Charan wanted another support for the production. Nayanthara’s acceptance is the first step to success. It’s a challenging character. Satya Dev played the antagonist. I have seen its potential. There is dynamism and uniqueness in his films. He is a hidden gem. Sunil’s is a mysterious character. Puri Jagannadh played a journalist.

Salman Bhai with his style, grace, masculine looks and fighting took the lead in the final portions. Thaar Maar song will surely blow your mind. Thaman, who won a national award, took the film to the next level with its background music. It is not a musical film and there is no large space for music. But Thaman turned it into a musical film. His work gives you goosebumps.

The Ghost of my brother and friend Akkineni Nagarjuna comes out on the same day. I hope it becomes a big hit. The young boy Ganesh’s Swathimuthyam is also released on the day. That should be a hit too. When movies big and small become hits, the industry will prosper.

Thaman wanted to make a song about a pivotal battle, choreographed by Ram-Lakshman masters. Hits and flops are not in our hands, but I’m sorry I disappointed the audience last time. GodFather is the answer to it.”

iQoo 11 series to launch on December 8: Expected specifications and features