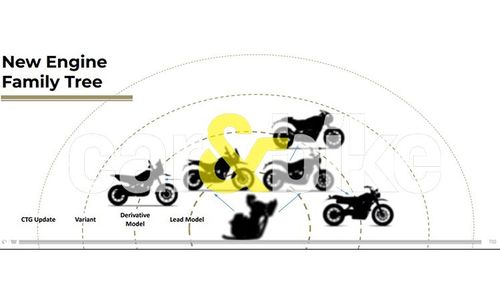 Exciting times are ahead as Royal Enfield prepares its new 450cc portfolio. A document accessed by carandbike shows that there could be up to five motorcycles for sale, based on RE’s new 450 cc engine platform, apart from the Himalayan 450, which has been tested in India on numerous occasions.

In addition to the 450 cc Himalayan, there will also be a more hardcore version of the same model, with specifications such as a flat seat, long rally-style suspension travel, adjustable suspension, aluminum rims and massive ground clearance. It’s probably also tubeless spoke rims. We expect the Himalayan 450 to launch in early 2023, while the ‘Rally’ version of the bike is likely to launch a few years later, maybe more. Does this also refer to Royal Enfield’s Dakar ambitions? Given that veteran rally legend CS Santosh has left Hero MotoSports and made an appearance at Royal Enfield Rider Mania held last week, we’re putting the points together and hope the picture that emerges leads Royal Enfield to Dakar. That would be something!

(Yes! Royal Enfield also has plans for a 450cc roadster, probably the Hunter 450!)

Those were motorcycle numbers 1 and 2. Next up is the 450cc roadster, which could be called the Hunter 450, a natural step up from the current Hunter 350 on sale. It will probably be a modern classic roadster with similar styling to the current Hunter, with more power. It is also probably the most affordable 450 cc RE model. The launch timeline is not very clear yet, but yes, spy test mules/prototypes have already been tested in India. So maybe another year?

And after the 450cc roadster, Royal Enfield will probably have a scrambler based on the same engine platform. It may seem like overkill, but having a lighter, road-focused scrambler model can be a good way to target enthusiasts who may find an ADV unsuitable or unnecessary for their requirements. Besides, RE doesn’t have a scrambler in its portfolio and a company that deals with modern classic motorcycles should have one.

Finally, the fifth model in the 450cc range will likely be a cafe racer, with a small fairing and will usually be some sort of variant of the Hunter 450/Roadster 450. Expect the cafe racer to have the same specs and features as the roadster.

Now, of course, the first motorcycle in the 450cc series will be the Himalayan 450. With a displacement of around 450cc, the new bike is likely to have a double overhead cam setup and is unlikely to be a long-stroke engine as it would develop significantly more power than the current 411cc Himalaya. Expect a bunch of features like switchable ABS, maybe traction control and a digital instrument console, along with inverted forks and adjustable suspension.