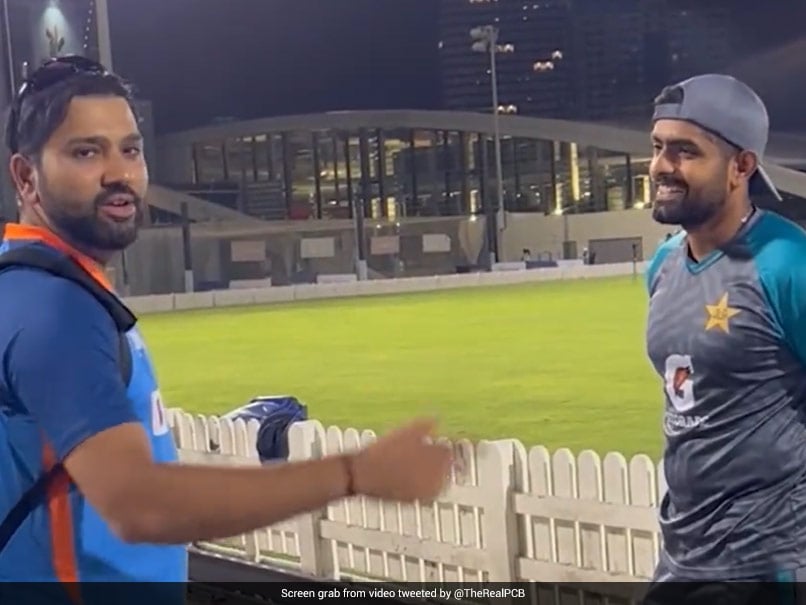 The Asian Cup starts later on Saturday with Sri Lanka against Afghanistan in Dubai. However, all eyes will be on the blockbuster clash between arch-rivals India and Pakistan on Sunday. Before the match, Indian captain Rohit Sharma and Pakistani skipper Babar Azam came face to face. In a video shared by the Pakistan Cricket Council, Rohit and Babar can be seen talking to each other for a long time. Both skippers could all be seen laughing as they chatted.

Both PCB and BCCI had previously posted videos of players from both camps having a healthy conversation before taking the field on Sunday.

Virat Kohli also had caught up with Babar and both batters had a short conversation.

According to recent form, Babar is one of the best hitters in the world while Kohli has been struggling lately. The comparisons between the two started a long time ago and have now picked up steam.

The India-Pakistan match will be Virat’s 100th in the shortest format.

Notably, the 33-year-old will become the first Indian player to have played 100 or more matches in all three formats.

So far, Virat has represented Team India in 99 T20I matches, scoring 3,308 runs at an average of 50.12. His best individual score for India in this format is 94 and he has scored 30 half-centuries in this format.

This year, Virat played just four T20Is for his side, scoring 81 runs at an under-performing average of 20.25. His best score in the format this year is 52.