‘Release Shrikant or face your downfall in 2024,’ Tyagis warn BJP at Noida mahapanchayat 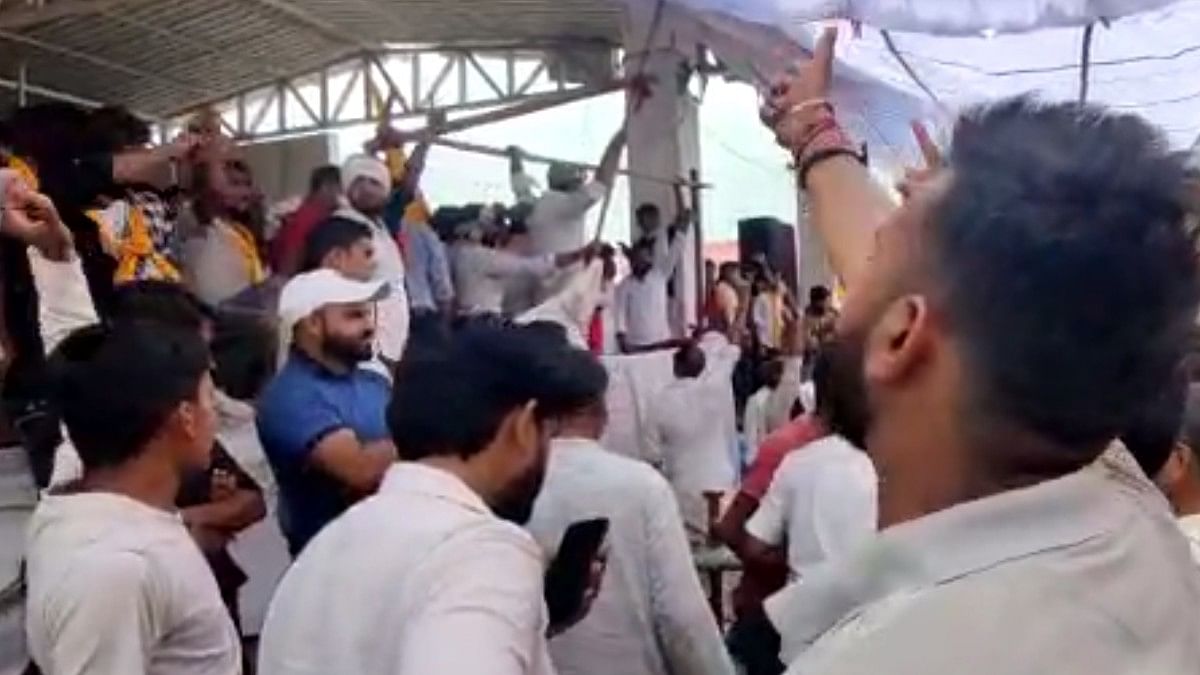 Tyagi is currently in jail for allegedly assaulting and abusing a female resident of his society, Grand Omaxe, in Noida, on Aug. 5. He was arrested from Meerut four days after the incident on charges of molestation, criminal harassment and cheating after a video of him assaulting and pushing the woman went viral.

A ‘mahapanchayat’, or large congregation, of the Tyagi community was organized at Ramlila Maidan in Sector 110, Noida, in support of Shrikant.

Although Shrikant claimed to be a BJP official, the party has denied any ties to him.

The demonstration at the maidan, which began around 10 a.m., continued to swell into the evening with hundreds of Tyagi community members from various parts of western UP to take part.

Hundreds of men gathered with various demands – first, immediate release of Tyagi; second, the withdrawal of charges against Tyagi under the Uttar Pradesh Gangsters and Anti-Social Activities (Prevention) Act, 1986; and finally that the Noida police apologize to Tyagi’s family, who were allegedly tortured by the police after Shrikant’s arrest.

Anger and frustration with the BJP government was palpable on the ground.

According to the 38-year-old, the Tyagis are among the BJP’s biggest voting banks; they would not accept any form of injustice. “Derogatory words used by [Gautam Buddha Nagar MP] Mahesh Sharma to the Tyagi community and for him to say that Shrikant has no affiliation with the BJP is unacceptable,” he said.

Many of the men present on the ground justified Tyagi’s actions against the woman.

Shyamlal Tyagi, a 62-year-old man from Muzaffarnagar, told ThePrint, “If someone killed the plants you grew as a baby, what would you have done? The woman who filed the complaint against Shrikant was destroying his plants. Anyone would be angry. Shrikant abused her and pushed her and I think he was right. He didn’t want to either, but anger makes you do things like that. He didn’t kill her. Then why is he being treated like a criminal?”

According to Ramesh, although Tyagi “should be punished for abusing and pushing a woman,” he should not be treated under the Gangster Act like Vikas Dubey, he said, referring to the UP mobster who was charged under the law in 2019. sued. “Our brother Shrikant is not a criminal, he is a good man and we want him out immediately or we will escalate our protest.”

It was striking that no women were present at the demonstration.

Also read: Shrikant Tyagi is not alone. List of complaints against Noida bahubalis is long

No stone was left unturned by the Tyagis to show their strength. Hundreds of Jeeps, Motorcycles, Tractors, Fortuners with large banners that read “Tyagi ko riha karo” or “Hum Tyagi hai, hila ke rakh denge(we’re Tyagis, we’ll shake you to the core) were a common sight.

See also  Watch: Dhawan's million-dollar reaction to fan's 'Can I have your shirt?' sign | Cricket

Those who gave speeches did not mince their words as they talked about the BJP.

“We are ready to go to jail, but we want our demands to be met, otherwise the BJP will go down in 2024. No Tyagi will vote for the BJP. Our sister, Shrikant’s wife Anu Tyagi, and her children were harassed for nothing. We will not harass our wives. Shrikant has apologized for abusing that woman, but he cannot be punished so severely for abusing and just pushing someone,” said Harsh Tyagi, 42, from Ghaziabad.

Meanwhile, Noida was transformed into a fortress to keep law and order in check. Several routes into Sector 110 were closed, police and Rapid Action Force (RAF) personnel patrolled the streets, and security was stepped up at the offices of BJP MP Mahesh Sharma, as well as at the Kailash hospital group it owned. in Noida, as a precaution.

However, BJP did try to offer an olive branch. As the demonstration continued, state minister Sanjeev Balyan . said told media people: “Shrikant Tyagi should be punished for whatever he has done, but it is not right that his family faced problems. The Tyagi community has always voted for us, so if there’s anything we’ll talk to them.”