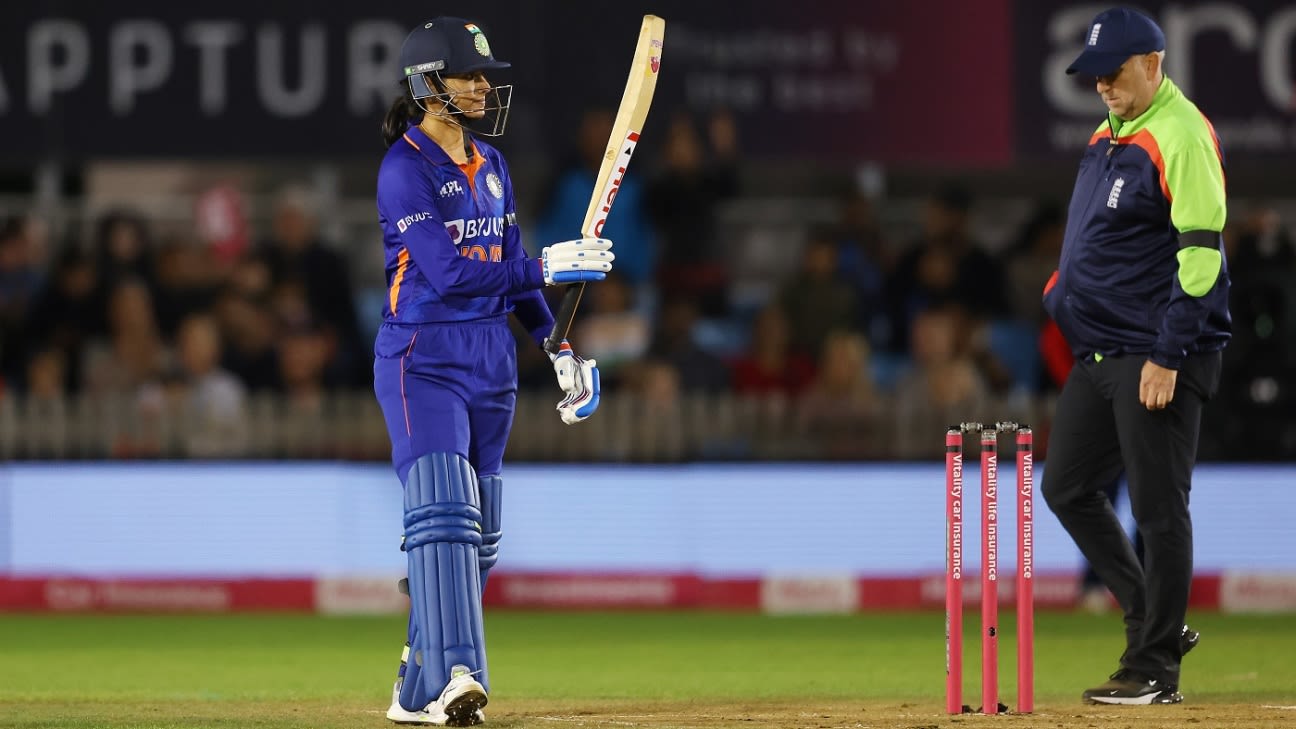 A glorious half-century unbeaten run by Smriti Mandhana saw India take eight wickets victory over England with 20 balls left in their second of three T20Is to make the series 1-1.
If this evening was anything to pass up, the damp and gloomy start to fall has so far been confined to both ends of the country. Durham had offered a soggy opening to the series on Saturday, as England went on to take a nine-wicket victory in conditions not to India’s liking. Then London was shrouded in persistent rain for much of Tuesday. However, the Midlands held on to the summer as England’s innings progressed in the bright evening sun at Derby’s Incora County Ground.
That was perhaps the most pleasing thing about it from the hosts’ perspective after they lurched from 16 for 3 to 54 for 5…produced an innings-saving unbeaten half-century of its own. In the end, however, it was the much more experienced Mandhana who countered Kemp’s attempt with a brilliant 79 who wasn’t out to set a series decider in Bristol on Thursday.

Setting a subpar goal, thanks to England’s early collapse and a vastly improved on-field performance by India, Mandhana played the key role in bringing in, facing 53 balls and finding the boundary 13 times.

She set an opening score of 55 with Shafali Verma, who fell for 20 with a sharp return from Sophie Ecclestone and an unbroken partnership of 69 with Harmanpreet Kaur, which should have been out at 19 if Danni Wyatt hadn’t shot an immediate shot at deep. midwicket.
See also  Hoffenheim 0-2 Bayern Munich: Initial reactions and observations

Dayalan Hemalatha lost her stump to a ball from Freya Davies who beat the perimeter as the only other batter in India to fall, and Mandhana brought the winning runs with back-to-back fours on Davies, propelled by midwicket and lofted over the bowler’s go. towards far away.

England started well enough when Sophia Dunkley snapped the third ball of the match, from Renuka Singh, for four through midwicket and Wyatt punched the fifth between back point and short third. In the next over, however, Dunkley fell on Deepti Sharma’s first pass and was stunned by Richa Ghosh and Wyatt followed shortly after, sending Renuka to Sneh Rana on the first slip.

A combination of excellent field work – an area in which India was sloppy in the opening game – and a blunder by Alice Capsey made it 16 for 3. Capsey had knocked Renuka through the covers and started coming back for a third point, seemingly unaware of Radha Yadavs brilliant effort ran to her right in the deep and outstretched at full power to stop the ball in front of the rope and fire it fluidly into Harmanpreet inside the ring. While Bryony Smith stood her ground at the end of the non-striker, so did Capsey, flat-footed halfway down the field, watching Harmanpreet throw at the keeper, who fiddled but broke the stumps while Capsey was nowhere near.

India hadn’t completely eradicated their fielding errors with Pooja Vastrakar parrying a catch that should have been a catch to clear Smith at 12 as she rushed in from deep midwicket. But Smith dropped the next ball after a brilliant diving effort from Radha as she ran in from long on Rana’s bowling, who then let Amy Jones out to attempt a reverse sweep to one that slipped under the bat and hit the stump . Maia Bouchier, who shared a 65-run tie with Kemp, was also dropped at 25 by Kiran Navgire in the ring, before Rana got her stumped to claim her third wicket.

Kemp played her eighth T20I, but only hit for the second time, coming in at number 7 and reviving the English innings with her 37-ball knockout. She released three sixes and lifted Radha to the ground twice to book her swell over Renuka’s deep midwicket. She brought out her first international fifty with a straight-driven four on the penultimate ball of the innings, finishing undefeated at 51.

Kemp made her international debut on this ground against South Africa less than two months ago, as England looked to renew their T20 side ahead of the Commonwealth Games. She was chosen primarily for her bowling, with England looking beyond veteran seamen Anya Shrubsole, who has retired from international cricket, and Katherine Brunt, resting for India’s tour. She became the youngest English woman to reach 50 in T20Is at 17 years and 145 days. She is also the second youngest for English women in international cricket, after Sarah Taylor, who scored 61 in an ODI against India in 2006 at the age of 17 and 96 days.