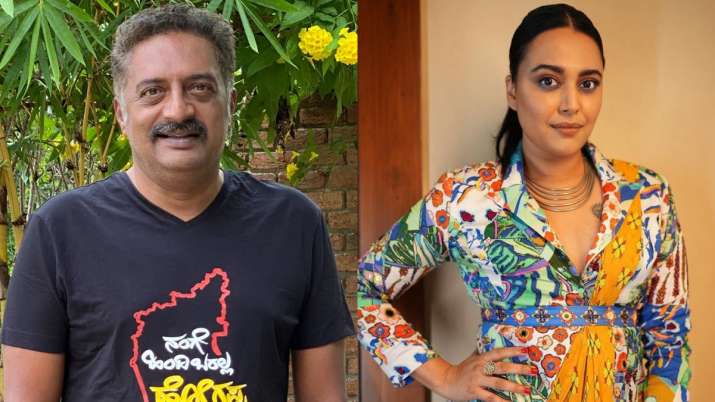 Prakash Raj was dubbed the ‘male version’ of actress Swara Bhaskar after coming out in support of superstar Shah Rukh Khan and his family. The actor-politician faced massive trolling on social media platforms. He was compared to the actress for not shying away from sharing her opinion on social media. Prakash gave something back to one of the trolls and said it is an ‘honour’ to be compared to Swara. She also responded to Prakash Raj’s response to the user, who mocked him for the comparison.

Prakash retweeted a message that read: “How could they cause him (Shah Rukh) and his family such intimidation and trauma as he has been bringing love and joy to the country for decades!”

To this, one user commented: “prakacha tweeted whether it’s visible to you or not, that tweet isn’t worth a cent either, he’s the male version of @ReallySwara.”

Strongly responding to the tweet, Prakash wrote: “I’M HONORIZED to be named as the male version of @ReallySwara (hands clasped emoji) whose version you are #justasking.” Swara also responded to his tweet saying “Sir, sir, sir You are you.. best version ever!” with different emojis.

Swara Bhasker is known for being chatty about social issues on the internet. A few days ago, Swara, who will next be featured in her upcoming film Jahaan Chaar Yaar, lashed out at a Twitter user who mocked her film. The user, Amit Kumar, wrote: “I’m anxiously waiting for the movie to hit theaters.” Swara responded to him and said, “Thank you (glitters and hug emojis).” Minutes later, the user added: “You’re welcome, actually there’s construction going on in my apartment so I can’t find a quiet place to sleep. What could be quieter than theater during your movie!”

“Haha! Glad I gave you the chance to land your much practiced and rehearsed joke. Now go show off your boyz I answered,” Swara told him.

On the work front, Swara will next be seen in Jahaan Chaar Yaar. The film also stars Shikha Talsania, Meher Vij and Pooja Chopra. Written by Kamal Pandey, the film also marks his directorial debut.