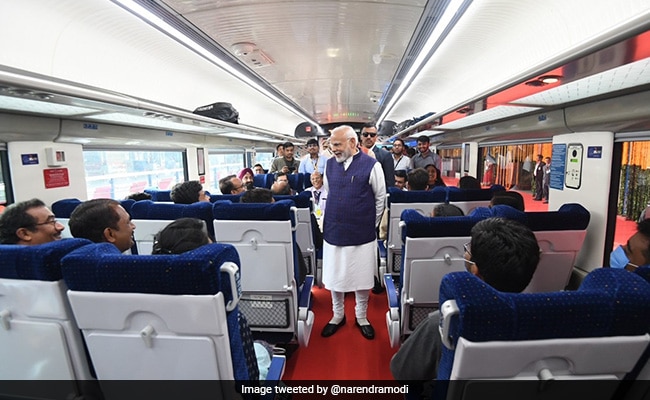 PM Modi inaugurates Nagpur Metro and waves to the passengers traveling by train.

Prime Minister Narendra Modi inaugurated Phase I of the Nagpur Metro rail project on Sunday and bought a ticket for a ride on the metro from Freedom Park to Khapri.

PM Modi also laid the foundation stone of Phase II of the railway project, which will be developed at a cost of more than Rs 6700 crore.

During his journey from Freedom Park to Khapri, the prime minister was also seen interacting with students and travellers.

Prime Minister Modi waved his hand to passengers traveling on the train after flagging out the train.

This is the sixth Vande Bharat Express to be flagged by Prime Minister Modi.

Later in the day, during the public function in Nagpur, he will lay the foundation stone for the redevelopment of Nagpur Railway Station and Ajni Railway Station which will be redeveloped at a cost of around Rs 590 crore and Rs 360 crore respectively.

The Prime Minister will dedicate the Government Maintenance Depot, Ajni (Nagpur) and Kohli-Narkher Section of Nagpur-Itarsi Third Line project to the nation. These projects have been developed for about Rs 110 crore and about Rs 450 crore respectively.

The laying of the foundation stone for the National Institute of One Health (NIO), Nagpur by the Prime Minister is a step towards capacity building and infrastructure in the country under the ‘One Health’ approach.

‘One Health’ approach recognizes that human health is linked to animal health and the environment. This approach recognizes that most infectious diseases affecting humans are zoonotic (animal-to-human) in nature. The institute – which will be established at a cost of more than Rs 110 crore – will collaborate and coordinate with all stakeholders and act as a catalyst to enhance research and capacity building in the ‘One Health’ approach across the country.

The Prime Minister will lay the foundation stone of the project to reduce the pollution of Nag River in Nagpur.

The project – under National River Conservation Plan (NRCP) – will be implemented at a cost of over Rs 1925 crore.

“The prevalence of sickle cell disease in the Vidarbha region, especially in the tribal population, is relatively high. The disease, along with other hemoglobinopathies such as thalassemia and HbE, causes a significant disease burden in the country. To address this issue, the Prime Minister laid foundation stone of the ‘Centre for Research, Management and Control of Haemoglobinopathies, Chandrapur’, in February 2019. The Prime Minister will now dedicate the center to the nation, which is expected to become a Center of Excellence for innovative research, technological development, human resource development, in the field of hemoglobinopathies, in the country,” it said.

The Prime Minister will dedicate the Central Institute of Petrochemicals Engineering & Technology (CIPET), Chandrapur to the nation. The institute aims to develop skilled personnel to meet the requirements of the polymer and related industries.