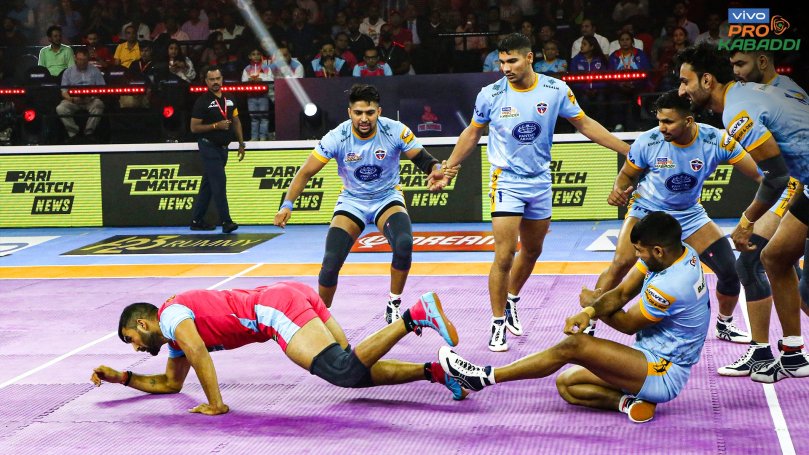 Jaipur Pink Panthers lost 34-32 to UP Yoddhas. At halftime, former champions Jaipur was 15-12 in favor. But Yodd raised the bar at crucial moments to score the thrilling victory in Friday’s final game.

Earlier in the evening, Bengaluru Bulls defeated Telugu Titans 34-29 in the second match of the opening PKL 9 day. After the first half, the scores were even (17-17). But in the second half, the Bulls picked up the pace.

While defending champion Dabang Delhi also got off to a flying start. In the opening match, they beat U Mumba 41-27 at the Sree Kanteerava Stadium in Bengaluru.

Also read: PKL 2022: Vivo Pro Kabaddi Season 9 is set to kick off on October 7 and will take place in 3 major cities across the country

Dabang Delhi vs U Mumba

Dabang Delhi KC captain Naveen Kumar got his team off to a stellar start in the Vivo Pro Kabaddi League Season 9 as he racked up 13 points for his team, beating U Mumba 41-27 in the opening game at the Shree Kanteerava Indoor Stadium in Bengaluru on Friday.

Dabang Delhi KC earned the momentum as Naveen Kumar put in a series of fantastic forays. He was supported brilliantly by defenders Vishal and Sandeep Dhull as Delhi inflicted an ALL OUT to take a huge lead 11-9 in the 9th minute. Naveen continued to push the pedal to help Delhi extend the lead to 14-5. The Dabang Delhi KC defense unit led by Krishan continued to tackle U Mumba raiders as Delhi led at halftime at 19-10.

U Mumba showed a little more urgency in the second half with Ashish picking up some crucial raid points and Kiran Magar putting in some brilliant tackles, but the Naveen Express continued to rage to keep Delhi in the lead 28-20 in the 31st minute. With only three U Mumba members on the mat, Naveen went on a multi-point raid and recorded his first Super 10 of the season. Moments later, Delhi again went ALL OUT and led comfortably at 33-21.

Delhi sealed the fate of the match as they achieved a massive 12-point lead in the 40th minute. Naveen continued to rack up raid points as Dabang Delhi KC finally walked off the mat as winners.

The Bengaluru Bulls put on a spectacular show for their home fans on Friday night in the second game of the opening day of the Pro Kabaddi League Season 9, shrugging off the challenge of the Telugu Titans 34-29 at the Shree Kanteerava Indoor Stadium. For the Bulls, Neeraj Narwal finished with 7 points, while the duo of Vikash Kandola and Bharat took in 5 points each, helping their campaign kick off with a thumping victory.

The proceedings proceeded as Vinay landed the first heist very quickly. Siddharth Desai also came in, before the defenses of Bharat and Bengaluru Bulls thwarted their attack. The early momentum was with the Telugu Titans, who worked well as a unit. The hosts, Bengaluru, who have a well-regulated core, fought back after the early exchanges and destroyed the slim lead, while Bharat, Saurabh Nandal and Neeraj Narwal led the charge, taking points in an emphatic fashion.

The Bulls inflicted an ALL OUT just before the middle of the first half, giving them a five-point lead. For a moment Telugu rattled another gear with the introduction of Rajnish, whose SUPER RAID put the cat between the pigeons just before the breather. Rajnish immediately put an ALL OUT on the Bulls as both teams went into halftime 17-17.

The second half started slower, but with the Titans still holding a slim lead in the first five minutes. However, the Bulls used their review cleverly, with Neeraj picking up the points on a Do or Die Raid, to bring the game back up to par. The Bulls and the Titans were unwilling to give in even an inch and match each other game after game. With just over 9 minutes left, both teams were tied at 23-23, with the Bulls’ defense looking rock solid at the timeout.

An untimely misstep wreaked havoc for the Titans, as Vishal and co conceded some big points. From then on, the Bulls put their foot on the pedal and inflicted another ALL OUT, giving them a 5 point lead at 30-25.

As the clock ticked, Rajnish and the Titans tossed the sink at the opposing team, but the Bulls’ defense was at its best, gobbling up the points in quick succession. The Bulls, who posted 12 tackle points compared to the Titans’ 7, ended their night as comfortable winners.

Jaipur Pink Panthers vs UP Yoddha

Bengaluru: The UP Yoddhas and Jaipur Pink Panthers played a rollercoaster of a match in the third match of the Pro Kabaddi League season 9 at Shree Kanteerava Indoor Stadium in Bengaluru on Friday. Both sides continued to gain points throughout the match, but the Yoddhas held their nerves and defeated Jaipur 34-32.

Raiders Rohit Tomar and Surender Gill came in with points as UP Yoddhas took the lead 6-4. However, Arjun Deshwal did some brilliant raids and helped Jaipur Pink Panthers take the lead 8-6 in the 12th minute. Shortly after, Jaipur inflicted an ALL OUT and took a huge lead 12-7. Surender Gill came in with a few raids, but the Pink Panthers led 15-12 at the end of the first half.

The UP Yoddhas tied the score at 15-15 with a great raid from Surender Gill and a great tackle from Sumit at the start of the second half. Moments later, Nitesh tackled Kumar Devank to help the Yoddhas cause an ALL OUT and take the lead at 18-16. Star raider Pardeep Narwal also stepped up his game as the Yoddhas extended their lead to 21-16 in the 27th minute. V Ajith Kumar single-handedly got the Pink Panthers back into the game with a SUPER RAID, but shortly after Narwhal’s exploits propelled the UP team to a five-point lead at 25-20.

Bhavani Rajput performed a SUPER RAID in the 32nd minute and kept the Panthers in the game. However, the Yoddhas held onto their lead 28-24 in the 36th minute, even though they only had two players on the mat. But moments later, the Jaipur Pink Panthers did an ALL OUT to overtake the Yoddhas.The Panthers and Yoddhas battled head-to-toe in the final minutes of the game, but raiders Surender Gill and Pardeep Narwal ultimately helped the UP squad emerge victorious.