Paytm’s plan to buy back shares has left investors surprised and concerned about the growth prospects of the loss-making Indian fintech firm as it uses cash to bolster its hammered shares.

The board of One 97 Communications Ltd., the publicly traded entity that runs Paytm, will decide on the buyback on Tuesday.

The move comes as the stock has fallen about 75% since listing last November, emerging as the world’s worst-performing major IPO in a decade. The slump also prompted a division of Japan’s SoftBank Group Corp. – a major lender – to reduce its position.

While a buyback could at least temporarily halt the decline in Paytm shares, some investors are questioning the attempt to control the share price rather than using the money for business.

“Share buybacks are a strategic play for Paytm as the share price has eroded a lot,” said Karthick Jonagadla, the founder of Mumbai-based Quantace Research.

“For the buyback to work, the company may have to pay a 30%-40% premium over the current price. Otherwise it may not serve its purpose.”

By using this money for buyback, Paytm says there are no other attractive opportunities available to grow the business and so they are returning the money to the stakeholders

“While filing for a repurchase proposal, the company has ensured that there is excess liquidity, meaning all cash needs are adequately budgeted,” Paytm said in an emailed statement Tuesday.

“Management is confident in strong operational performance and remains focused on creating long-term value for its shareholders.”

Indian companies cannot use money raised from an IPO to fund share buybacks, the company had previously said. Any buybacks, if approved by the board, will be made with cash on the company’s books, it said.

Rahul Jain, an analyst at Dolat Capital Market Ltd. in Mumbai, estimates the correct size of a buyback at around 8 billion rupees ($97 million) to 10 billion rupees. 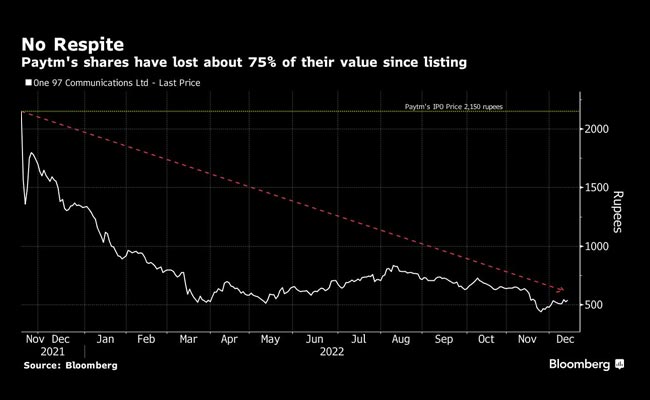 Paytm would likely buy the shares on the open market, he previously wrote in a note.

To be sure, analysts on the sell side have become more positive on Paytm’s stock in recent weeks.

As many as eight of the 12 analysts tracking the stock recommend a buy or equivalent rating — the most since trading debut, according to data compiled by Bloomberg.

Paytm wants to tell investors that the current share price does not reflect value and that even a small buyback can help the company send the signal, said Vikas Gupta, a strategist at OmniScience Capital.

“The company’s focus is clear, it now wants to be profitable at some point and remains confident in doing so.”

Touted as India’s largest-ever IPO at the time of its listing, Paytm’s offering attracted traditional global stock pickers such as BlackRock Inc. and the Canada Pension Plan Investment Board.

Shares sold at the high end of a marketed range as the deal attracted strong demand from individuals and funds, though they never traded above the listing price.

With the shares of these companies coming under pressure due to the global meltdown in the tech sector, some of their early backers have exited the stock or cut their stakes.

Unless the shares are bought back for more than 2,150 rupees each — the price at which they were sold at the IPO — the buyback will only benefit Paytm’s pre-IPO shareholders and employees, it wrote.

“It is unclear whether the size of the buyback will be meaningful enough to move the needle,” IiAS wrote for Paytm.

–With help from Sankalp Phartiyal.