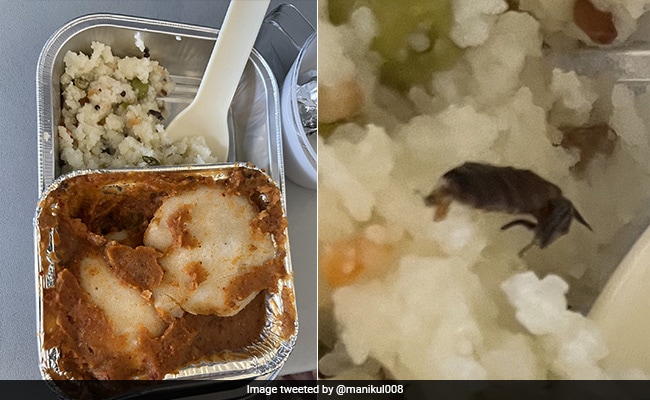 Two photos of Mr Solanki’s meal have been posted on Twitter.

An Air Vistara airline passenger shared Friday on the microblogging platform Twitter that he had found a cockroach in his packed food during the flight. Nikul Solanki, the passenger, tweeted that there was a “small cockroach in the Air Vistara meal”.

Mr. Solanki has uploaded two photos of the dinner he had en route along with the caption. Idli sambhar and upma are depicted in one image on a scale. The other zoomed-in photo shows a dead cockroach in the food.

Ten minutes after the tweet, Air Vistara’s official contact responded to the complaint. “Hello Nikul, all our meals are prepared to the highest quality standards. Please send us your flight details via DM so we can investigate and deal with the matter as soon as possible. Thank you,” the Air Vistara handle wrote in the quick response.

Hi Nikul, all our meals are prepared with the highest quality standards. Please send us your flight details via DM so that we can investigate the matter and resolve the issue as soon as possible. Thank you. ~Badri https://t.co/IaDysdIxJS

Earlier on Thursday, Singapore Airlines Ltd said it was in confidential talks with India’s Tata Group about a potential deal that could involve the integration of Vistara and Air India.

“The discussions are intended to deepen the existing cooperation between SIA and Tata and may include a possible integration of Vistara and Air India,” Singapore Airlines said in a statement.

However, it added that talks were ongoing and no final terms had yet been agreed.

Singapore Airlines has a 49% stake in Tata SIA Airlines, which operates Vistara, with the remaining 51% owned by the Indian conglomerate.

Air India did not immediately respond to a request from Reuters for comment.