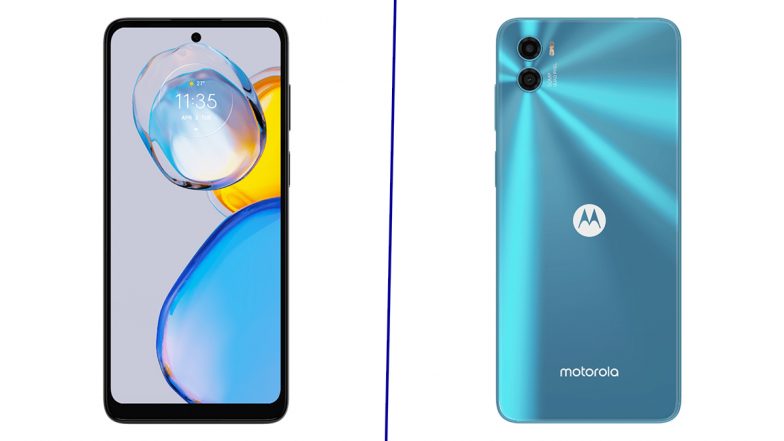 Motorola India has officially launched the Moto E32 smartphone in India today. The device is introduced as the successor to the E31 handset. Moto E32 debuted in the global market earlier this year and the Indian variant has the same specs. Moto E32 is now on sale in the country via Flipkart. It comes in arctic blue and eco black. Moto E32 launches tomorrow in India, flipkart availability confirmed.

The device falls under the sub-Rs 12,000 segment. It competes with Realme C35, Redmi 10 Power and more. In terms of specs, the Moto E32 sports a 6.5-inch centrally aligned HD+ perforated LCD display with a 90Hz refresh rate. It is powered by a MediaTek Helio G37 SoC coupled with 4 GB of RAM and 64 GB of internal storage.

Get the new one #motoe32, a real eye-catcher, with a stunning and smooth 90 Hz IPS LCD display, a first-class design, a 50 MP camera system and much more. Put yours on now @flipkart & at leading stores for ₹10,499 pic.twitter.com/9K7wdk26ic

For optics, the device gets a dual rear camera, consisting of a 50MP primary camera and a 2MP depth lens. Up front, there’s an 8MP selfie shooter. Moto E32s with triple rear cameras launched in Europe.

The Moto E32 has a 5,000mAh battery with support for 10W fast charging. Connectivity options include dual-band Wi-Fi, a 3.5mm headphone jack, Bluetooth 5.0 and a USB Type-C port. It runs on Android 12 based MyUX UI. As for the pricing, Moto E32 costs Rs 10,499 for the only 4GB + 64GB model. It also comes with face unlock technology and a side-mounted fingerprint sensor. The smartphone was launched in Europe earlier this year for 149 euros.

(The above story first appeared on LatestLY on October 07, 2022 13:34 IST. For more news and updates on politics, world, sports, entertainment and lifestyle, log on to our website Latestly.com).