Moonlit Maldives Through The Eyes Of Janhvi Kapoor. See What She Posted 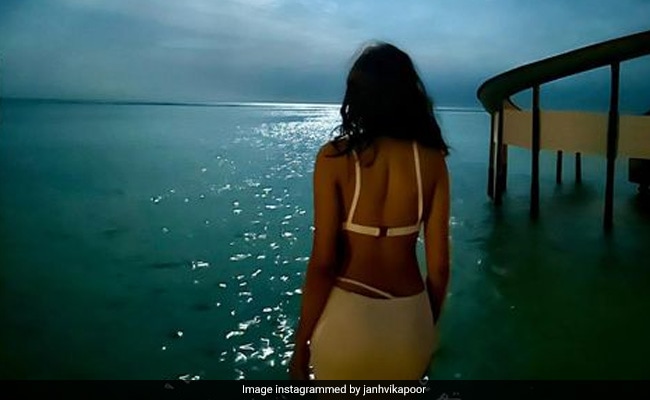 Janhvi Kapoor is living her best life in the Maldives. The actress shared a new set of photos from her time on the island on Saturday morning. The photos show Janhvi sitting nicely in a white ensemble. She also shared a moonlit photo of the breathtaking view. Janhvi Kapoor captioned the post: “Meet me in the pale moonlight.” Before that, the actress had shared photos of herself from the beach. She was seen chilling in a hammock in another shot she previously posted to Instagram. Janhvi Kapoor checked into the island earlier this week and the photos from her stay there just keep getting better.

Check out the photos shared by Janhvi Kapoor:

Janhvi Kapoor checked in to the island earlier this week and she has been actively sharing photos from her time there. She captioned this post: “Messy hair, iridescent skies, salty winds and an endless ocean.”

Here is another entry from Janhvi Kapoor’s Diaries of Maldives:

In terms of work, Janhvi Kapoor was last seen in the thriller Mili. She is known for starring in films like Roohi, Gunjan Saxena: The Kargil Girl, Ghost Stories and Good luck Jerry among other things. Her upcoming projects include Dosta 2, Bawaal and Mr and Mrs Mahi.