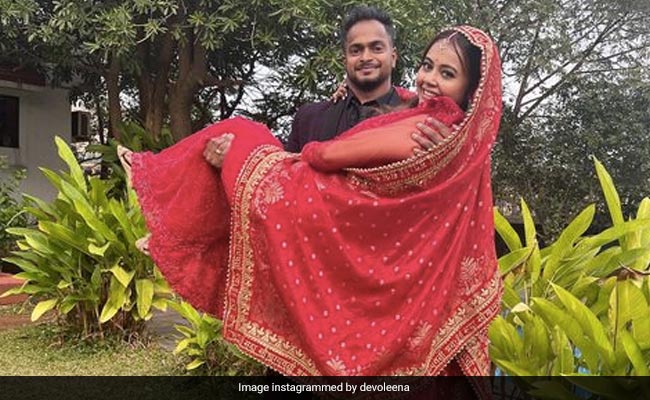 Actress Devoleena Bhattacharjee has revealed the identity of the “mystery man” (her words) she married yesterday, surprising her fans and the internet. “The mysterious man, the famous ‘Shonu’ and tum sab kajia (your brother-in-law),” Devoleena captioned a post on Instagram announcing her marriage. A second post shared in conjunction with a wedding dress handle shows an emotional Devoleena clinging to her new husband in tears; the post’s caption identifies him as her “bae Shahnawaz”. According to various media reports, Devoleena’s “mystery man” is her fitness trainer Shahnawaz Shaikh. See the post here:

In her wedding announcement, Devoleena Bhattacharjee, best known for her work on the show Saath Nibhaana Saathiya, shared photos of herself and Shahnawaz in their finery. “And yes, I can proudly say that I am occupied and yes shonu. Chiraag lekar bhi dhoondti toh tujh jaisa nahi milta. You are the answer to my pain and prayers. I love you Shonu. Lots of love to you all. Keep us in your prayers and bless us. The mysterious man urf The famous #SHONU and tum sab kJija,” she wrote.

Before confirming that she had married Shahnawaz, Devoleena posted pictures of herself in her bridal look, making the internet go haywire. It was unclear whether she was actually getting married — some time ago, Devoleena and she Saath Nibhaana Saathiya co-star Vishal Singh sparked marriage rumors with what appeared to be a proposal; it later emerged that they were shooting a music video.

This time it was a real wedding and Vishal Singh was one of the guests. “I have no words to tell you what you mean to me. Wishing you all the love and happiness for new beginnings. I am so lucky to have you in my life and to all fans Devish forever love you both” , he captioned a photo with Devoleena.

A second wedding photo showed him with Devoleena after the wedding ceremony was completed.