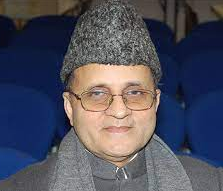 According to Encyclopedia Britannica, “Khans” (inns) were established in the cities in the early years of the Islamic world to provide shelter and food to travelers. These Khans were found in the Middle East, North Africa and Central Asia. The earliest khans were found during the Umayyad period in Syria and provided food and shelter to traders and travelers. Under Ottoman rule in the 16th century, Khans became an inherent feature of a larger complex containing a mosque, fortress, bath and other amenities.

Early Madarsas were developed from occasional lectures held in the mosques. And later, Khan’s lodgings were connected with mosques for students who traveled to participate in these lectures. The endowments of the ruling nobility were instrumental in formalizing these centers of learning as permanent institutions.

Thus, according to Britannica, Madarsa was a theological seminary and a school of law with a curriculum centered on the Qur’an and the hadiths. In Morocco, Sultan Abul Hasan (1331-1348) had founded the Ben Yousuf Madarsa.

In addition to Islamic theology; law, mathematics, logic and natural sciences were taught in madarsas. Tuition was free and food, shelter and medical care were also provided. The instruction usually took place in the courtyard and consisted mainly of memorizing textbooks and the instructor’s lectures. The teacher also gave certificates (Ijazat; singular ijazah) to his students who were educated in Madarsas. That meant permission to repeat and pass on his lessons.

However, as the centuries passed, some scholars and clergy identified learning the English language and soaking up scientific knowledge with the so-called ‘diseases’ of British rule in India. This is how Madarsa Education became detached from the English language and scientific learning. In this general context, we the people of India must give a well-thought-out benevolent treatment to our Madarsa education system.

Currently, in 21st century India, Muslims are a dominant minority (180 million according to Census 2011), comprising 14.2% of the total population and 73% of all minorities. The report of the Prime Minister’s High Level Committee (popularly known as the Committee of Justice Rajinder Sachar) clearly highlights, with documentary support, the educational disadvantage of the Muslim community.

According to this report, the national average of literacy rate is 65.1% while the Muslim average is only 59.1%. The initial differences between Muslims and ‘all others’ have widened in all four groups: primary, secondary, metric and higher secondary. Enrollment and continuation rates are lowest among Muslims. And the problem is more acute for girls. Muslims are doubly disadvantaged by a low level of education combined with a low academic quality.

In this context, coming back to our basic topic here, we notice that in the 12th century Madarsas flourished in Muslim communities around the world. In India, the first Madarsa was established in 1192 AD in Ajmer. Even today, one can see remains of the Madarsa adjacent to the tomb of Firoz Shah Tughlaq in Delhi. In modern India, prominent national figures including social reformer Raja Ram Mohan Roy, author Munshi Premchand and India’s first president, Dr. Rajendra Prasad, educated in Madarsas.

Contextually, we should also summarize Article 46 of the Constitution of India, which reads: The State shall with particular care promote the educational and economic interests of the weaker sections of the people. This should be understood in conjunction with the findings of the Justice Sachar Committee 2006 and Justice Mishra Commission 2008.

Their reports have made important recommendations to improve the low educational attainment of Muslims. These include, moreover, a re-evaluation of the textbooks to purge them of explicit and implicit content that may impart inappropriate social values, especially in the area of ​​religious intolerance.

Madarsas have certainly provided the children with education to complement the government measures to make education universal. For primary education, the adoption of the child’s mother tongue is going to meet the provisions of the National Education Policy of India, 2020. But interestingly, according to the Justice Sachar Committee Report, the fact is that only three percent of all Muslim students in the school age group are enrolled in Madarsas, although their absolute numbers are huge (as are other demographics in India which is a country of continental proportions). Thus, it is important to note that the excellent capabilities of Madarsas should in fact be used benevolently to meet the challenges of modern education of Indian Muslims.

For this purpose, an essential initiative taken by the government since 1996 is the ‘Scheme for Provide Quality Education in Madarsas (SPQEM)’. The details are available on the HRD union ministry website. At the same time, it would be equally beneficial to make widespread use of the ‘equivalence’ offered to the certificates and degrees issued by Madarsas for subsequent admissions to higher education institutions.

The National Institute of Open Schooling (NIOS) gives Madarsas students the opportunity to transition into mainstream education. COBSE is an autonomous legal entity, backed by the central government, which is a consortium of all school education boards in India. All madarsas provincial governments should apply for COBSE membership. Needless to say, Madarsas need not worry about joining COBSE. On the other hand, a decent level of integration and connection of Madarsas to the national mainstream is very necessary.

(The author is President, Zakat Foundation of India, zakatindia.org