Lioness Gets Caught In Zebra Stampede. Here’s What Happened Next 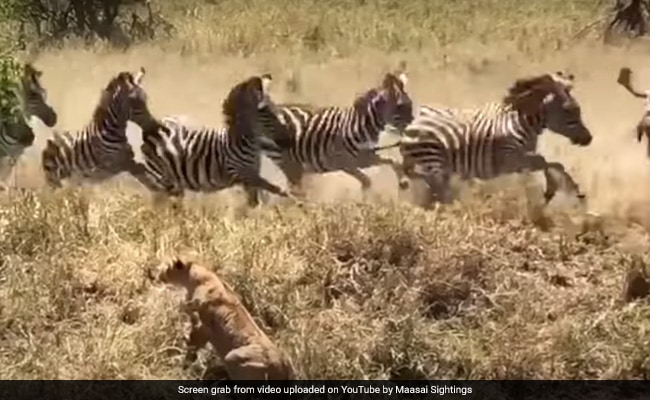 A video of a dazzling zebra running over a lioness has surfaced on the internet, leaving netizens astonished. The clip, shared on YouTube by Maasai Sightings on Sunday, was shot in Tanzania’s Serengeti National Park.

“A lion pride in Serengeti was hunting zebras and a lioness decided to stand in front of the zebra stampede and try to catch one to be trampled by the stampede,” the post’s caption reads.

Watch the video below:

The one-minute video opened to show lions scattered across an open field to catch some zebras. Within moments, the camera then focused on one of the lionesses who found themselves in the middle of a stampede while hunting.

Throughout the scene, the ground resembled a war zone. But as nature would have it, the lioness eventually caught two zebras, according to the caption of the YouTube post.

Since the video was shared, the video has left internet users astonished. ‘She’s lucky she never ended up as Mufasa! Bring in the wildebeest!’ wrote one user referring to an animated character from the movie”lion king‘.

“I was expecting a dead lion, but those cats are beasts. That was such a risky move from the lion pride, they must be starving,” added another.

A third said: “Absolutely amazing!!! What a great hunter despite the running herd… lions/lionesses are unique in the wilderness… over the top.” “She did well. She stayed focused, determined and she made her kill,” added the fourth.