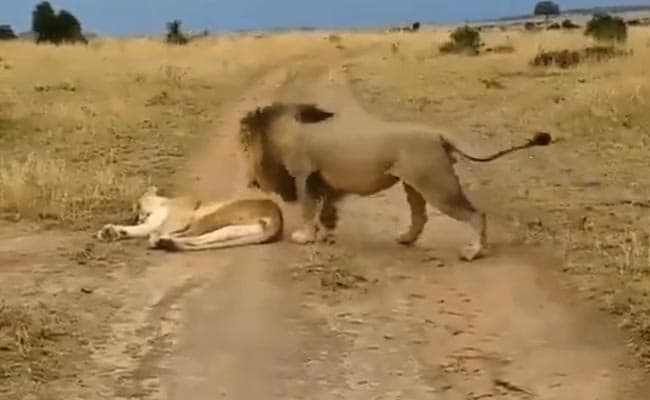 The video was shared on Twitter by user bkbuc

Lions rule the wilderness with their thunderous roars and predatory instincts. Lions are beautiful and formidable, but it seems that even the king of the jungle is afraid of a lioness. An example: a video goes viral on the internet of a lion teasing a lioness. A restless lion didn’t let the weary lioness take her well-deserved afternoon nap, and he soon faced the consequences.

The video shows a lioness sleeping peacefully in a forest, and a lion tiptoeing up to the wildcat and trying to wake her up by biting her. This action of the lion angered the lioness, and this caused the big cat to attack the lion and roar at him. The lion becomes frightened of the lioness and begins to back away from the enraged lioness. It seems that the lion has learned his lesson and will never disturb the lioness again.

The video was shared on Twitter by user ‘bkbuc’ with the caption: “This is how the lion jokes”. The video has amassed more than 142,000 views and 1,239 likes.

Recently, a lioness entered a beautifully decorated gathering in an unknown location after coming out of the wilderness. The lioness not only enters the gathering, but also focuses on one of the guests.

As the video progresses, the man is seen climbing a tree to escape the big cat, but the lioness refuses to give up and continues to follow him. The man tries to kick the lioness fearfully so that he loses his grip and falls, but then he holds onto the tree. The video ends abruptly, leaving many users wondering what the man’s fate is.