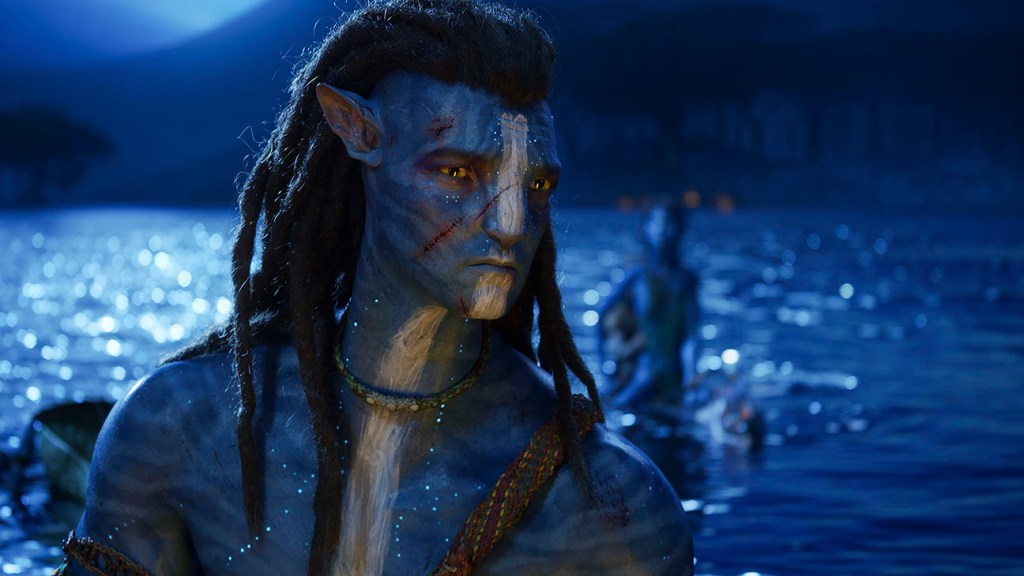 James Cameron knows his way around a sequel. Of Aliens and Terminator 2: Judgment Day, he showed he could build on the strengths of franchise starters with muscular action, steadily ramping suspense and mind-blowing technological inventions. He is also a storyteller who is well versed in H2O, drawing on both the majestic expanse of the oceans and the icy perils of the depths below. Titanic and The abyss.

So that shouldn’t surprise anyone Avatar: The way of the water – with echoes of all those earlier films – is a wildly entertaining follow-up to the 2009 sci-fi eco-thriller that remains the highest-grossing film of all time.

Avatar: The way of the water

It comes down to

Just ignore the dripping dialogue and get wet.

In terms of story refinement and even more dialogue, this $350 million sequel is almost as straightforward as its predecessor, if not weak at times. But the elaborate, bio-diverse world-building draws you in, the visual spectacle keeps you mesmerized, the passion for environmentalism stirs, and the warfare is as visceral and thrilling as any multiplex audience could wish for.

Box office for Disney’s December 16 release turns monstrous, while simultaneously whetting global appetite for the three others avatar entries that Cameron has announced.

What’s the most amazing thing about it The way of the water is the compelling case it makes for CGI, at a time when most VFX-heavy productions settle for a routine efficiency that has stripped the movies of much of their magic. Unlike other directors who have sometimes had their creative instincts suffocated by technological experimentation – think Robert Zemeckis and Ang Lee – Cameron thrives on the artifice of the digital toolbox.

Operating in High Dynamic Range at 48 frames per second, it uses the immersive quality of enhanced 3D to give DP Russell Carpenter’s images depth and tangible vibrancy. Skeptics who watched the trailer and rejected the long-awaited avatar sequel as a video game aesthetic hybrid of photorealism and animation that ends up looking like neither one isn’t quite wrong. But the trippy gigantic screen experience, for those willing to indulge in it, is visually delightful, especially in the breathtaking underwater scenes.

How much you care about the fate of a bunch of outsized blue people depends on your hunger for a sci-fi survival story that draws from classic westerns while upping the ante with the threat of genocide. Anyway, this is a big movie, even monumental, that justifies its three-plus hours of film time and its gargantuan financial investment.

The story begins more than a decade after Marine veteran Jake Sully (Sam Worthington) began living on the extrasolar moon Pandora in the native Na’vi form of his genetically engineered avatar. He and his warrior wife Neytiri (Zoe Saldaña), meanwhile, have raised a family including teenage sons Neteyam (Jamie Flatters) and Lo’ak (Britain Dalton), their tween sister Tuk (Trinity Jo-Li Bliss) and adopted daughter Kiri. (Sigourney Weaver), the biological child of the avatar of the late Dr. Grace Augustine.

Spider (Jack Champion) – a human child orphaned by the ‘Sky People’ conflict and too young to be put into cryosleep when the colonists and their military security force were sent to Earth at the end of the first film – spends more time among the Na’vi than in the lab facilities with the science nerds. While his connection to the Pandorans runs deep, he is a walking harbinger of conflict to come in future installments as his loyalties are divided. His father’s identity does not remain a mystery for long.

Jake is the revered leader of the Omaticaya clan, whose peaceful existence in the lush forests is threatened when the invaders return to Pandora. Their mission this time is not only to mine the moon for the valuable mineral ‘unobtainium’, whatever that may be, but also to establish Pandora as a human colony as Earth becomes uninhabitable.

The operation is run with strict business ruthlessness by General Francis Ardmore (Edie Falco), who stomps around in an Amplified Mobility Platform – a descendant of the mechanical exoskeleton loader Ripley used to take down the Queen at the end of the film. Aliens – like it’s a cozy romper. But once she orders her elite military team to “subdue the enemy,” she virtually disappears.

At the head of the security team is a face with a familiar snarl and an arsenal of hard-hitting folksy snark, Colonel Miles Quaritch (Stephen Lang). But since he was killed by Neytiri’s arrows last time, it’s now his bigger, faster Na’vi avatar (don’t ask), accompanied by a similar set of redesigned big-footed blue grunts. “A Marine cannot be killed,” says Quaritch. “You can kill us, but we’ll just regroup in hell.”

It goes somewhat against the goal of establishing a new habitat for humanity for their interstellar craft to burn vast expanses of greenery wherever they land, but that just goes to show that revenge is all Quaritch cares about. The recombinant colonel in his new form has acquired none of the spirituality or respect for nature of the Na’vi people, and in his disdain for “half-caste” he even resembles a Wild West villain with fancy hardware more than anything. formerly.

When it becomes clear to Jake after some tense encounters that Quaritch is after his family, he relinquishes leadership of Omaticaya and moves with the brood to a distant cluster of islands inhabited by the Metkayina clan. The chief, Tonowari (Cliff Curtis), and his pregnant shamanic wife, Ronal (Kate Winslet), reluctantly offer the refugees sanctuary, aware of the obvious risk to their community.

Their son Aonung (Filip Geljo) ignores his father’s instructions to help the land lovers adapt to life in and around the ocean, and immediately clashes with stubborn Lo’ak. But their daughter, Tsireya (Bailey Bass), proves to be a generous teacher, and Kiri in particular takes to the new environment like a fish out of water. She has inherited Grace’s fascination with the natural world, but also reveals a strong connection to Eywa, the divine entity worshiped by the Na’vi.

Anyone clinging too much to consistency may wonder why the Na’vi adults all speak in an unidentifiable exotic accent, while their offspring tend to sound like they’ve stepped right out of a CW teen show. Tsireya, in her adorable macrame bikini top, seems to be keeping up with the Kardashians. But you either go with it or you don’t, and the scenes of domestic family life and adolescent interaction have a soulful sweetness that is heartily captivating.

With the resemblance of the Metkayina’s intricate tattoos to Maori body art and even a war song with protruding tongues similar to the haka ceremony, Cameron seems to be paying homage to the indigenous people of the avatar host country productions, New Zealand. The design work on the beautiful Metkayina people themselves is impressive, physiologically different from the Omatikayas in several ways that reflect how they adapted to life in the ocean.

“Water has no beginning and no end,” says Tsireya, with a reverence that no doubt echoes Cameron’s own feelings. The director has been a deep-dive since graduating from Roger Corman’s special effects shop with his rarely mentioned feature film debut. Piranha II. That fascination has not just continued The abyss and Titanic but also in his ocean documentaries, giving the new film a circular feel as we share its intoxication with a pristine environment full of power, splendor and mystery.

Fittingly, the Metkayinas have their own equivalent of the Omatikaya’s Tree of Souls, the underwater Cove of the Ancestors, the bioluminescent vegetation among the film’s visual showstoppers.

Just as the flying irans and leonopteryxes flew through the glowing skies of Pandora in the first film, the sequel finds wonder in the creatures that glide over the beautifully detailed reefs and ocean depths in this new environment. The Metkayinas ride dragon-like aquatic mammals called ilus and skimwings. In one enchanting touch, Tsireya shows the newcomers how to attach some kind of stingray cape that allows them to breathe underwater. The ocean inhabitants’ most sacred bond is with the giant tulkun, highly intelligent cetacean creatures who provide Quaritch with 300 feet of bait to lure Jake out of hiding in the maze of islands.

You might roll your eyes at soggy dialogue that refers to a tulkun as a “spirit sister” and “composer of songs,” but sequences in which these sentient giants become prey are deeply moving. That section introduces new characters in mercenary sea captain Scoresby (Brendan Cowell) and Resources Development Administration marine biologist Dr. Ian Garvin (Jemaine Clement), who watches dejectedly as the magnificent creatures are hunted for one of the most precious resources in the universe.

The performance-capture work with the actors in the underwater scenes is fantastic, but it’s when the conflict gets really hairy that Cameron is most in his element. The open-water clash that dominates the last hour is an impressive feat of action cinema where the stakes are raised considerably by the vulnerability of the Na’vi children, all pleasantly feisty and resourceful.

“Family is our fortress,” says Jake, and while certain dynamics—such as the eldest son with a golden child and the undisciplined second son who can never live up to his example—seem pedestrian, the characters are all sufficiently fleshed out and individualized. to keep us invested. That’s especially true when disaster strikes and the sustained onslaught leaves no time to fall apart after a devastating loss.

The story of the good guys against the villains (scripted by Cameron, Rick Jaffa and Amanda Silver) is not exactly complicated, but the infinite particularities of the world in which it takes place and the tenderness with which the film observes the native inhabitants make Avatar: The way of the water surprisingly emotional. While much of the nuance in the cast’s work is overshadowed by CG wizardry, Saldaña and Winslet have poignant moments, Weaver has a solid foundation on which to build continued engagement, and Dalton and Champion stand out among the young newcomers.

I missed the pulse-pounding suspense and tribal themes of James Horner’s score for the 2009 film, but composer Simon Franglen ably retains the suspense where it counts. Even more than its predecessor, this is a work that successfully combines technology with imagination and meticulous contributions from every craft department. But in the end, it’s the sincerity of Cameron’s belief in this fantastic world he’s created that makes him memorable.