IRE vs AFG 3rd T20I Match Prediction – Who will win today’s match between Ireland vs Afghanistan?

Ireland will take the field aiming for a series win with a win in the third T20I.

Ireland welcome Afghanistan for the third T20I of the five-game series at Civil Service Cricket Club Stormont, Belfast, on Friday, August 12, after taking a 2-0 lead after their second consecutive win over the visitors on Thursday.

The hosts put in a clinical performance in the second T20I and go into the third game with a view to a hat-trick of wins. The Irish bowlers secured the win for the hosts in the second T20I as Mark Adair’s seam bowling pair, and Joshua Little took full advantage of the new ball, limiting the Afghan batters to a meager 122 runs in their 20 overs.

Though the Afghan bowlers put up a fight, the total would never be enough as the hosts ran past their tally with one over and five wickets in the bag. Mohammad Nabi will have to inspire the team in the upcoming match to avoid a series defeat.

The surface at Stormont played well for the batters in the series opener, but in the next game, the new ball bowlers enjoyed their outing, offering some help early in the innings. The chasing team has won both matches at the venue and the team that wins the toss wants to continue the trend by bowling first.

Probably the best hitter of the game

The Irish skipper has rediscovered his batting form and looks back on his best in the ongoing series. Andy Balbrine has scored 97 runs in the two games so far, anchoring the innings while others play their natural game on the team.

Ireland’s Joshua Little has been in great bowling form late, taking 13 wickets in his last seven outings in the format. The 22-year-old was crucial to the host’s win in the second T20I, scalping two wickets by conceding just 18 runs in his four overs. His advance collaboration with Mark Adair poses a significant threat to the Afghan batters. 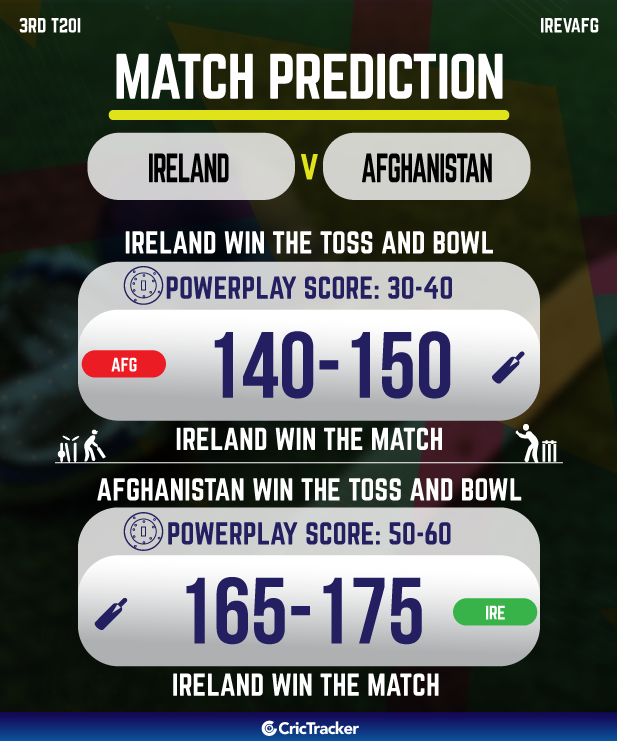 Disclaimer: This prediction is based on the understanding, analysis and instinct of the author. When making your prediction, keep the mentioned points in mind and make your own decision