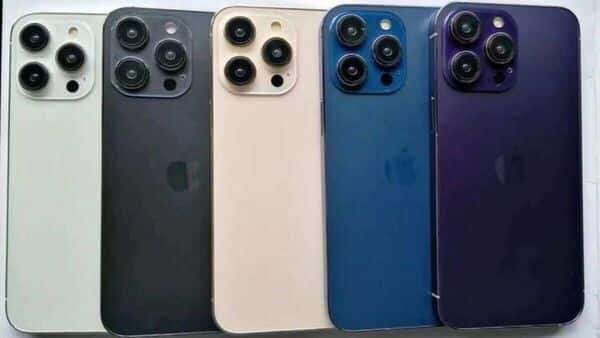 Apple has announced its ‘Far Out’ event on September 7. During the event, the company is expected to release its latest iPhone 14 series, which is expected to include four new smartphones: iPhone 14, iPhone 14 Pro, iPhone 14 Pro Max and the all-new iPhone 14 Max. As the launch date gets closer, rumors of the upcoming iPhones are starting to circulate the internet.

According to a latest leak, the Cupertino-based company is expected to bring two new color options with the iPhone 14 series. Dummy images of iPhone 14 Pro have surfaced showing the upcoming mobile in all-new dark purple and blue colors. Other color models shown in the pictures are gold, white and black. The antenna bands of the Gold and Purple models contrast with the frame because they are white, unlike iPhones in previous years.

It should be noted that these images are dummy images. The information shared above should be taken with a grain of salt.

Meanwhile, existing iPhone models have seen a price drop on e-commerce platforms Amazon and Flipkart. Apple iPhone 13 is on offer at a discounted price of 65,999 on Amazon after 17% off the original price. Likewise, the iPhone 11 is available at 39,999 on Flipkart. The smartphone has received a 15% discount on the original price tag of 49,900. There is also a discount on Apple iPhone SE.