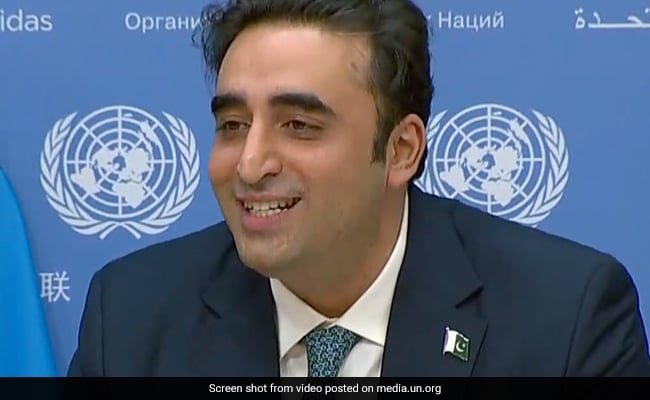 In a strong and brutal condemnation of Bilawal Bhutto’s remarks at the UN, New Delhi said Pakistan lacks the credentials to defame India and added that it must stop “Make in Pakistan terrorism”.

In a highly objectionable remark on Thursday, Bilawal Bhutto had said, “Osama bin Laden is dead, but the butcher of Gujarat is alive and he is the prime minister of India.” He was responding to a strong attack on Foreign Minister S. Jaishankar who called Pakistan the “epicenter of terrorism”.

“These comments are a new low even for Pakistan. The Foreign Minister of Pakistan has clearly forgotten this day in 1971, which was a direct result of the genocide unleashed by Pakistani rulers against ethnic Bengalis and Hindus. Unfortunately, Pakistan seems not to do that.” “A lot has changed in the treatment of its minorities. It certainly has no credentials to defame India,” the State Department said in a statement.

“Cities like New York, Mumbai, Pulwama, Pathankot and London are among many that bear the scars of Pakistan-sponsored, supported and fueled terrorism. This violence has emerged from their Special Terrorist Zones and exported to all parts of the world. ” Make’s terrorism in Pakistan must stop.”

“We wish Pakistan’s Foreign Minister had listened more sincerely to the testimony of Ms Anjali Kulthe, a Mumbai nurse who saved the lives of 20 pregnant women from the bullets of Pakistani terrorist Ajmal Kasab, yesterday in the UN Security Council. Clearly, “The foreign minister was more interested in the whitewashing role of Pakistan. Pakistan FM’s frustration would be better directed at the masterminds of terrorist enterprises in its own country, which have made terrorism part of their state policy. Pakistan must change its own mentality or become a pariah,” the government said.

“The language used by Pakistan’s foreign minister shows that he not only represents a bankrupt country, but he is also mentally bankrupt,” said Meenakshi Lekhi, deputy foreign minister.

“He is the representative of a failed state and has failed himself, so Pakistan has also failed. What can you expect from those with a terror mentality?”

Anurag Thakur, the Union Minister of Information and Broadcasting, called the comments “nefarious and shameful”.

“Pakistani soil has been used to nurture, shield and protect terrorism. Their nefarious plans have been revealed to the world,” Thakur said.

Yesterday, in a scorching attack on Pakistan, Secretary of State Jaishankar said, “My advice is to clean up your behavior and try to be a good neighbour. Hillary Clinton said during her visit to Pakistan that if you keep snakes in your backyard, you can’t expect them to bite just your neighbors, eventually they will bite the people they keep in the backyard.”

Prime Minister Modi has been cleared of any wrongdoing by an inquiry into the 2002 Gujarat riots. Earlier this year, the Supreme Court rejected an appeal against his acquittal in one of the cases related to the killings.

More than 1,000 people were killed in three days of violence in Gujarat and the state police were accused of not doing enough to stop the riots that began after a train carriage carrying pilgrims was set on fire in Godhra, killing 59 people.