‘If This Happened In Assam…’ 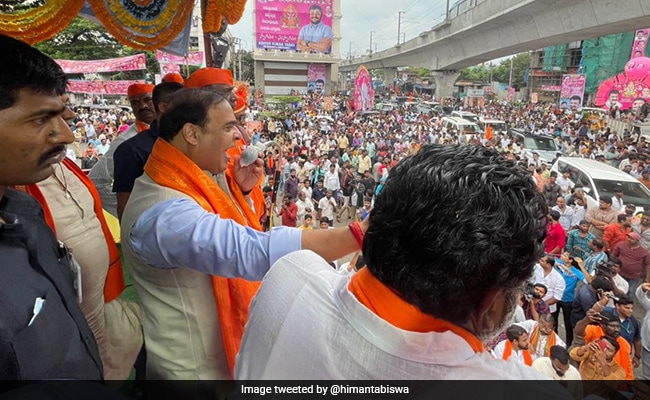 Assam Chief Minister Himanta Biswa Sarma said today that he “could have been attacked with a weapon” by a man who confronted him on stage in Hyderabad yesterday and told him not to speak ill of Telangana Chief Minister K Chandrasekhar Rao (“KCR”) .

“Our police had communicated with the government of Telangana and we also sent my travel plan,” the BJP leader told reporters. “But even before I addressed the crowd, a man in the colors of TRS (the ruling party) came forward and said, ‘Why are you talking about the CM?’. It was premeditated. I hadn’t even spoken yet .”

The security concern controversy comes as KCR gathers anti-BJP forces to challenge Prime Minister Narendra Modi and BJP in 2024. The state will also go to the polls next year.

KCR-led Telangana Rashtra Samiti has said there was no security breach. “Mr Sarma had been abusing CM K Chandrashekhar Rao all day… People didn’t like that so one of them, who happened to be the supporter of KCR, responded. We want Mr Sarma to apologize at our first minister and the people of Telangana,” TRS spokesman Krishank Manne told media.

Video of the incident showed the man – identified as Nand Kishore Vyas, a local TRS leader – pulling at the microphone set up in front of Mr Sarma. He glared at Mr. Sharma and said something not audible in the video. Mr Sarma, who kept smiling, was in Hyderabad as a guest of the Bhagyanagar Ganesh Utsav Samiti for the Ganesh festival and other events.

Today, Sarma claimed that the man, who had been taken into protective custody, had gotten away with “mild sections” of the law. “He would have come very close to me and could have used a sharp weapon if he had one. Of course he wasn’t trying to hurt me physically,” he said.

“Had this happened to a visiting leader from Assam, the police would have taken more action,” he added.

He continued the political attacks on KCR, echoing his speech in Hyderabad. “Our politics should be free of dynasties. In Telangana, only one family runs the government,” he said, referring to how KCR’s son is a minister and the daughter a legislator.

He also attacked Congress’ Rahul Gandhi and his ‘Bharat Jodo Yatra’, most notably via a viral video of him being with a Catholic priest, George Ponnaiah, in Tamil Nadu.

In the video tweeted by several BJP leaders, Mr Gandhi is heard asking, “Jesus Christ is a form of God? Is that right?” To which the pastor said, “He is the real God…God reveals him (himself) as a man, a real person…not like Shakti…so we see a human person.”

Sarma accused Rahul Gandhi of “provoking the priest to speak that way”.

“We don’t have a matter of beliefs, but you shouldn’t compare,” he added.

Congress has said the BJP leaders’ tweets “have no relationship whatsoever” with what is being claimed.