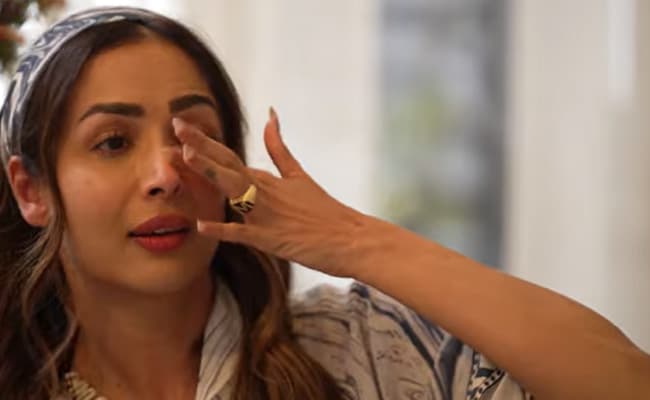 A still from a video. (courtesy of DisneyPlus Hotstar)

Malaika Arora, who is gearing up for her upcoming reality show Move in to Malaika, dropped a new teaser on her Instagram account. In the clip, Malaika can be seen speaking out about her divorce from Arbaaz Khan and her life decisions with Farah Khan. It also shows her BFF Kareena Kapoor speaking about the actress. The video opens with Farah saying “I said yes” to which Malaika clarifies “Yeah, to a show Farah, but whatever else the world says…”. Next, we see Kareena calling Malaika “witty, hot, beautiful and rock solid.” “I think she (Malaika) is witty, hot, beautiful and rock solid, let’s see if she lets her guard down,” added Kareena Kapoor.

The clip also shows Malaika speaking at an event where her sister Amrita Arora and actress Sophie Choudry are in the audience. Malaika says “I have moved, my ex has moved, when will each of you.”

In another scene, Malaika gets teary eyed as she talks to Farah about her life decisions. “Every decision I’ve made in my life has been totally worth it. I’m happy.” Farah comforts her and says, “Aww, you look beautiful even when you cry.”

Malaika Arora shared the teaser and wrote in the caption, “It’s time for me to let you all in, shall I let my guard down? #HotstarSpecials #MovingInWithMalaika will begin streaming December 5, Monday through Thursday at 8 p.m., only on Disney PlusHotstar.” Shortly after she shared the post, her industry friends flooded the comment section. Dino Morea wrote, “Good luck Mala. This looks great,” while Sophie Choudry wrote, “My bags are packed. I move in. Guard. I already live there. This is going to be fantastic love.”

Malaika Arora married Arbaaz Khan, brother of Salman Khan, in 998 and welcomed their son Arhaan Khan in November 2002. However, almost after 18 years of marriage, the couple decided to separate in 2017 and are continuing with co-parenting for their son. Malaika has been dating actor Arjun Kapoor for some time now, Arbaaz on the other hand is dating model Giorgia Andriani.