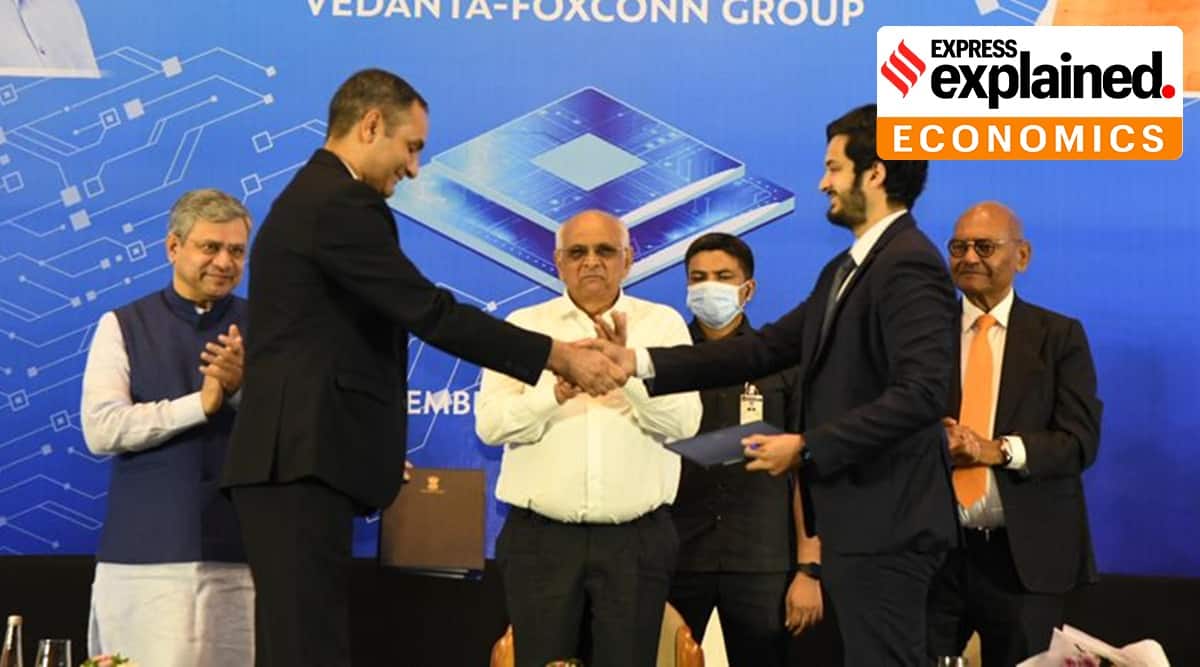 The companies’ talks with the government of Maharashtra were “almost final” when the senior officials met Chief Minister Eknath Shinde and Deputy Chief Minister Devendra Fadnavis in July 2022. acres of land in Talegaon Phase IV.

Now both political and administrative bosses in Maharashtra are finding it difficult to explain what went wrong in the campaign to seize the project.

First, what is Vedanta-Foxconn’s project?

Vedanta is partnering with Foxconn through a 60:40 joint venture to establish an integrated display and semiconductor manufacturing ecosystem. Foxconn is known for making assembly units for electronic devices, including but not limited to mobile devices. One of the goals of the project is to make India self-sufficient in electronics by expanding its presence across the value chain.

The joint venture was at an advanced stage of talks with the government of Maharashtra to set up the $22 billion (approximately Rs 1.54 lakh crore) project in the state.

How would the project have benefited Maharashtra’s economy?

What was the Maharashtra government’s offer to the company?

The main offer from the Maharashtra government was a capital grant of up to 30 percent to set up the factory in the Talegaon industrial area, among other incentives. According to Industries Department documents available from: The Indian Expressthe state government had offered an “extremely lucrative stimulus package” under the state’s policy for development and maintenance and manufacture of electronic systems.

See also  In 2020, Shraddha Walkar told cops Aaftab will ‘kill… cut’ her; they sat on it

The stimulus package included a power tariff subsidy of Rs 1 per unit, including aid to Vedanta to set up its own 750 MW solar power generation unit. Apart from subsidies for land, water and electricity taxes, the Maharashtra government had also offered stamp duty exemption and electricity tax exemption. The company also received incentives to generate employment.

Which other states participated and was Maharashtra aware of the Gujarat location for the project?

Tamil Nadu, Telangana, Karnataka and Gujarat were other states in competition to seize the project. Maharashtra’s Industries Department had made a detailed on-site comparison between Gujarat’s Dholera and Maharashtra’s Talegaon. The department document mentioned that Gujarat has relatively less skilled labor force. “Currently, there are no supply chain suppliers and customers near the site. Negligible ecosystem for electronics production in the state,” it said of the Gujarat site.

It further said that the land parcel at the Dholera site is non-contiguous, barren and swampy, requiring significant infrastructure and civil works.

Mentioning that Talegaon’s plot was contiguous, it said that Talegaon Phase IV is planned as an electronics city with a total area of ​​10,000 acres.

The note also mentioned Talegaon’s proximity to Pune and easy access to facilities offered in an urban area absent from the Dholera site. The department note stated that two site visits by company officials were held at Talegaon Phase IV, along with “several rounds of detailed discussion and sharing of important documentation.”

Why did Maharashtra have confidence in the project?

In the last week of July, the company delegation met with CM Shinde and his deputy Fadnavis. Following the meeting, Maharashtra Industrial Development Corporation released a press note which stated: “Vedanta is in active discussion with the Government of Maharashtra regarding their proposed semiconductor and display manufacturing facility. With a high concentration of skilled labor, port connectivity, seamless domestic supply chain and highly developed industrial infrastructure, Talegaon in Pune has emerged as a prominent option for Vedanta and Foxconn for their $22 billion investment, which will bring more than 200,000 direct and indirect jobs.”

The note went on to say that Vedanta and Foxconn had multiple rounds of meetings with the state leadership and that Vedanta was making site visits to Talegaon in Pune and that the location was an ideal match for their requirements.

Shinde had also said it was a win-win scenario as Maharashtra has the requisite skilled workforce and industrial and logistics infrastructure suitable for a project of this scale. A proposal regarding the transfer of land had to be submitted to the state cabinet meeting.

So why did the company choose Gujarat over Maharashtra?

According to sources within the Maharashtra Industries department, the reason could be Gujarat’s more lucrative offer of land-related incentives.

Politically, the opposition in Maharashtra claims that the state government has surrendered to Gujarat Prime Minister Narendra Modi at a time when the state is witnessing parliamentary elections.

The ruling party has blamed the previous government of Maha Vikas Aghadi (MVA) for not providing more incentives to the company, compared to Gujarat.

This MoU is an important step in accelerating India’s ambitions for semiconductor manufacturing. The investment of Rs 1.54 lakh crore will have a significant impact to boost the economy and jobs. This will also create a huge ecosystem for supporting industries and help our MSMEs.

The importance of the project to Gujarat can be gauged from Prime Minister Modi’s tweet, in which he said: “This MoU is an important step in accelerating India’s ambitions for semiconductor manufacturing. The investment of Rs 1.54 lakh crore will have a significant impact to boost the economy and jobs. This will also create a huge ecosystem for supporting industries and help our MSMEs.”