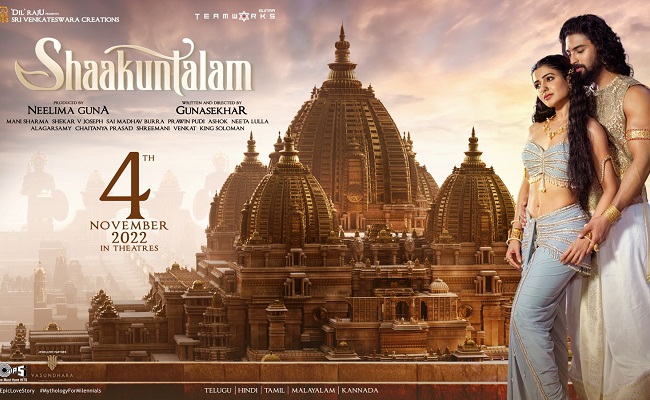 Shaakuntalam is one of the most anticipated movies in Indian cinema this year. In the film, the ethereal beauty Samantha stars in the titular role.

Director Gunasekhar made this film highly prestigious on a grand scale as one of the epic love stories ever in Indian cinema.

The film is about the love story of Shakuntala and her husband Dushyanta, as known from the play written by Kalidasa.

After finishing filming, Shaakuntalam is currently in the post-production stage. With the first look posters, the film has already reached everyone’s heart and mind.

Now the makers delighted the public with the announcement of the release date. The mass-edited film will be released worldwide on November 4, 2022.

The film is financed under Gunaa Teamworks in association with Sri Venkateswara Creations, the film has Manisharma’s music.

Scheduled for release in Telugu, Tamil, Malayalam, Kannada and Hindi on November 4, 2022.

Shaakuntalam is written and directed by Gunasekhar. Sai Madhav Burra wrote the dialogues for the film. Sekhar V Joseph is the cameraman and Prawin Pudi is the editor.