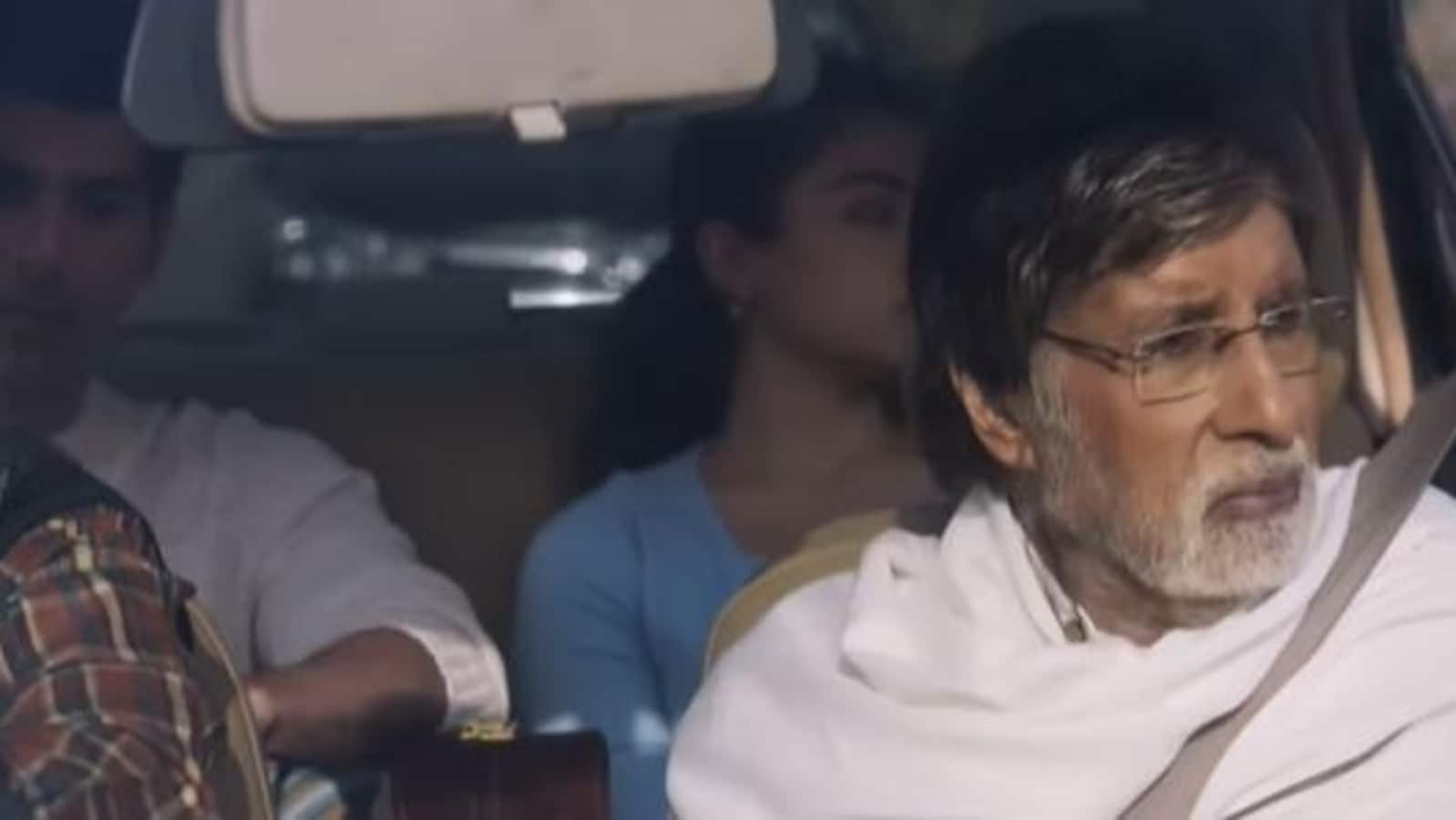 The matriarch of a family, Gayatri Bhalla (Neena Gupta) has passed away suddenly. In an effort to pass the time, Gayatri’s family and husband Harish Bhalla (Amitabh Bachchan) wait their turn at the cremation site, her neighborhood ladies busy figuring out what the WhatsApp group they are creating in memory of the deceased will be called. ‘Gone Gayatri Gone, Lonely Harish ji, Harish ji needs us’ are some of the suggestions that are said out loud before reaching a consensus to call it ‘Chandigarh Bubblies’. Why? Because Gayatri called the group by this name and her memories live on. Guard. There is more. The so-called group of friends poses for a smiling selfie, after all, a new WhatsApp group asks for a new profile picture. Well, this is only 0.1% of the callousness and absurdity that writer-director Vikas Bahl throws at us in this emotional rollercoaster of a funeral drama called Goodbye. Excuse me for saying funeral and drama in the same breath. But as you watch the story unfold in Goodbye, it really is a confused tale that says so much but is so caught up in its flaws that it never gets past a funeral. (Read also | Goodbye song Jaikal Mahakal: Amitabh Bachchan, Rashmika Mandanna are heartbroken)

In fact, throughout the first half, I kept wondering: What is Bahl trying to show through his story and characters? Is Goodbye the story of a grief-stricken dysfunctional family? Or a rebellious daughter who refuses to believe in outdated and orthodox rituals and traditions. Is it a story about four siblings who have settled in different parts of the world and come together to say one last goodbye to their late mother? Or a dilemma between faith and science. Is it a satire on the death rituals that are common in society? Or fake tear-shedding relatives. The last two aspects were beautifully portrayed in last year’s films Ram Prasad ki Tehrvi and Paggalit and they were, I must say, a good benchmark. Unfortunately, Goodbye doesn’t leave that impact behind or even come close.

Shortly after the news of Gayatri’s death reaches her children, they all return home to Chandigarh. Tara (Rashmika Mandanna), a lawyer who won her first case, is drowning in guilt for not taking her mother’s last call or answering her message. Karan (Pavail Gulati) flies down from the US with wife Daisy (Elli AvrRam) who orders a desi meal because she “loves the spicy Indian chicken.” Karan is a workoholic who can’t live without his laptop and earplugs, even as he lends a shoulder to the body of his late mother. Angad (Sahil Mehta) is Gayatri’s favorite and as he enters a fight from Dubai, he doesn’t miss ordering butter chicken and butter galic naan during his layover at the hotel, before his father takes him on a guilt trip over a phone call, because he throws up at a party dinner while he has lost his mother. Angad orders khichdi afterwards! There is another son, Nakul (Abhishekh Khan), who goes on a trek and realizes this loss much later than the rest of the family.

Amid all this, Harish, his Labrador named ‘Stupid’ and a domestic worker are busy discussing the chores to be performed at Gayatri’s funeral and last rites. Goodbye is a comedy-drama at its core, but somehow things don’t add up every time a joke is made while showing death and grief. Thus, Harish blindly follows the instructions of his friend PP (Ashish Vidyarthi) and let’s move Gayatri’s body here and there to be held in a certain direction. The comedy surrounding the deceased often comes across as bad and horrible.

There are several emotionally moving and heartwarming scenes in Goodbye that will make you cry at times, but the screenplay won’t let you get into it too long as the misplaced humor sounds way too often than it needs to be. And mind you, it’s not even a smart comedy that will make you laugh. It is indeed no easy feat to show a sensitive loss as death and to bring humor into it. But instead of being subtle, Goodbye does a little on your face too.

Picture this: Angad and Daisy have an unabashed ‘sambhog’ after they cremate their mother. When the father asks about it, he says, “We’re doing this for Mom. She wanted grandchildren.’ I don’t know if Bahl was trying to give a message here or was just bizarre.

Speaking of performances, Amitabh Bachchan takes the cake for his genuine sincerity, conviction and mixing emotions so well in every scene. Rashmika, in her debut Hindi outing is passable and that’s about it. Her dialogue doesn’t seem forced, although her expressions could have been much better in different situations. Pavail, Sahil and Elli are good in their roles and do justice to the screen time they are given. Neena Gupta lights up the screen every time she appears in flashback sequences. Her chemistry with Amitabh Bachchan is endearing. There is also Sunil Grover as the priest who performs the last rites. He lifts the storyline from a boring and super dragged first half to a somewhat interesting start to the second half. It’s interesting to see how he becomes the power to make Tara believe in faith over science.

Goodbye is loaded with emotions, but they don’t linger too long. It’s the comedy that takes over for the most part and flaws become too obvious to overlook. Still, check it out for a slice of life drama.