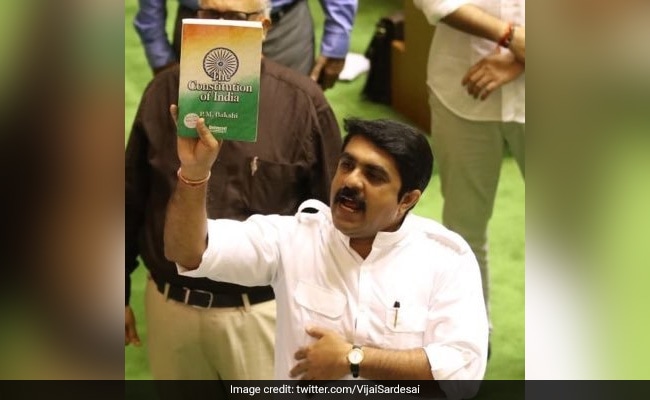 Congress ally Goa Forward Party has said MLAs who have defected to the ruling BJP are “pure evil” and “enemies of the people and God”. Led by former Prime Minister Digambar Kamat and senior leader Michael Lobo, eight of the 11 congressional MLAs joined the BJP today. Congress had prevented this in July, but the timing now – in the midst of the Rahul Gandhi-led ‘Bharat Jodo Yatra’ (Unite India March) – makes it even more embarrassing.

“The eight lawmakers who have decided, against all political propriety, propriety and fairness, to pursue their greed for wealth and hunger for power stand today as the symbols of pure evil,” said Goa Forward Party chief and his only MLA, Vijai Sardesai, said in a statement to the media.

He said the people of Goa would feel “stabbed in the back”, especially during “the Hindu auspicious period of Pitru Paksa, when these MLAs chose to repay their debts to their ancestors in this devious and false way”.

He accused the BJP of using “cheating and manipulation” to stay in power, saying the MLAs “allowed them to be bought (themselves) like cattle”. He appealed to the people to “reject these traitors…and brand them enemies of the people and God.” Political apostasy is not only a betrayal of the people’s mandate, but also “the denigration and mockery of God.”

This morning, the MLA’s meeting with the chairman sparked speculation as the meeting is not in session. State BJP chief Sadanand Shet Tanavade then said they are joining the party. And within an hour it was done.

Digambar Kamat and Michael Lobo have also been at the center of speculation about the July switchover, with Congress even asking the speaker to disqualify them under the Anti-Defectors Act. The party removed Michael Lobo as leader of the opposition, but a replacement was awaited.

In July, Kamat had said he was “shocked and dismayed” at the charges of leading a division. Even Michael Lobo, who was in the BJP earlier this year before joining Congress for the election earlier this year, had denied such a move. He took a swipe at Rahul Gandhi’s Kanyakumari-to-Kashmir yatra and said, “It’s Congress chodoBJP ko jodo. (Stop the Congress, strengthen the BJP).”

Congress in Goa also fell apart in 2019, when 10 of the 15 MLAs went to the BJP. This year, the party had made its candidates take a vow of loyalty in the presence of Rahul Gandhi. Apparently it didn’t work on at least eight of them.

Today, Mr Kamat said: “We are not satisfied with the Congress. We have seen what happened to Ghulam Nabi Azad,” referring to the senior leader who recently left the party while questioning Rahul Gandhi’s political acumen. “We will work with Prime Minister Narendra Modi and Goa CM Pramod Sawant to improve the state,” he added.