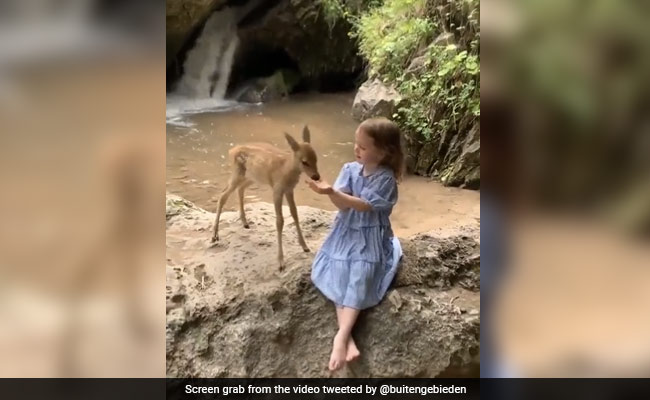 The image shows a little girl pampering a young fawn near waterfall.

A video, which depicts a fairytale moment, shows a girl pampering a fawn at a waterfall. The setting makes it look like a scene from a movie and wins hearts on social media. It reminds users how beautiful the old stories were and shows why nature plays a role in the happiness of people and animals.

Shared Saturday by a user called Outer Areas on Twitter, the caption reads, “Like a Disney fairytale.”

The video begins with a little girl sitting on rocks next to a waterfall, wearing a light blue dress. A fawn can be seen standing close to the girl and eating something from her hands. The girl seems happy while the deer keeps pressing her mouth lovingly in both hands. This way they continue to play together.

Since the post was shared, it has racked up more than eight lakh views and over 37,000 likes on Twitter. More than 3,500 users have retweeted the post.

“How beautiful the world would be if people stopped destroying everything,” wrote one user.

A second said: “The girl shows what humanity should look like. To protect the nature that provides us.”

The video showed the woman having dosa and soon the little boy came walking up to her with dosa on a spatula. When he gets to her plate, he cutely flips the dosa over for her.

The video was shared by a user named Joshiik on Instagram and received more than 21.8 million views and more than 1.5 million likes.