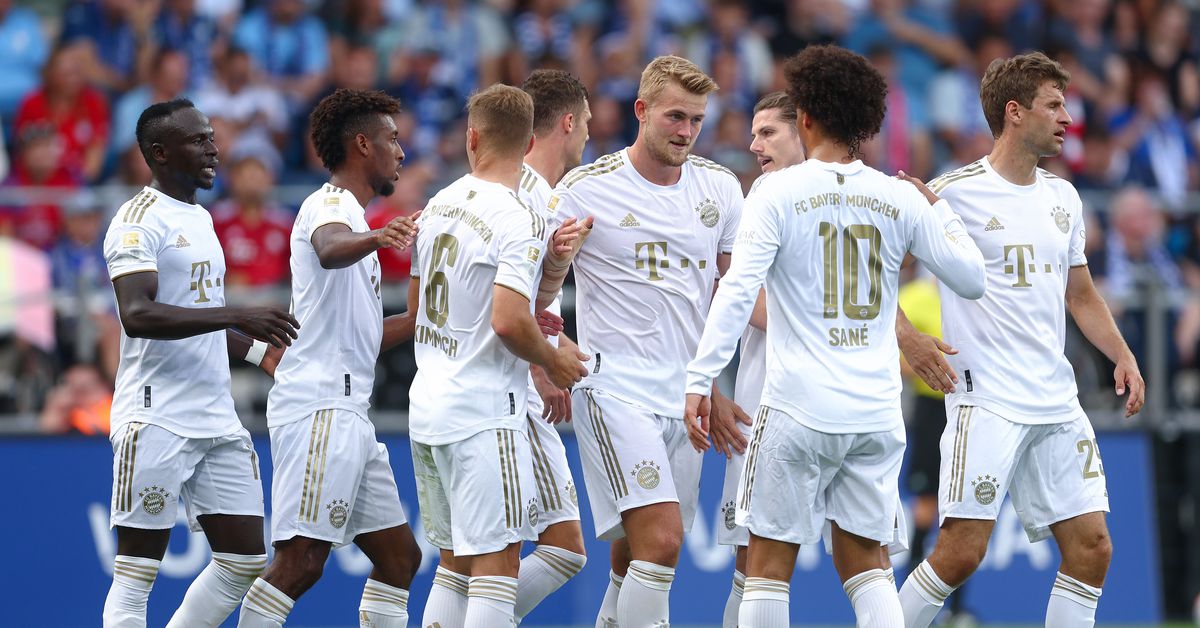 The water in VfL Bochum’s Vonovia Ruhr Stadium smelled of blood and the great white sharks arrived to party. Bayern Munich came to VfL Bochum with the need, perhaps the need, to stamp their dominance and put a spirited team back in their place that had stunned them 4-2 in the previous season. The Bavarians did just that, seven goals past a Bochum who gave no reprieve – and it could have been eight; Sadio Mane’s goal was disallowed for handball, but his arm was in as natural a position as possible. It was a thorough breakdown and a real showcase of what Julian Nagelsmann has been building towards over the past year with all his tactical shifts.

Zen and the art of squad maintenance

This season will be the season with the most games in football history, with the World Cup kicking off in the middle of winter. As such, fitness and rotation are paramount in the minds of any team.

Jamal Musiala was confirmed earlier this week, with Nagelsmann confirming that it was all about minimizing risk – and that if it was an important match Musiala would have been fit to play. Serge Gnabry did but was also kept out of the starting lineup after an apparently minor wrist injury, and Alphonso Davies was a late, possibly also precautionary, free-range. However, Bayern have rearranged their line-up for the first time this season.

The team has adapted very well to the changes and I think it is of the utmost importance that the team learns to work together in these different combinations. As the English weeks approach – and midweek games fill the schedule – rotation will be the name of the game.

Wingers all the way down

Two of the most notable changes in the starting XI were the absence of Jamal Musiala and Serge Gnabry, while Leroy Sané and Kingsley Coman replaced them. Bayern didn’t miss a beat.

It was clear from the start that Sané was on and it took him just four minutes to get on the scoresheet, assisted by none other than Coman himself. These two would run the game throughout the 90’s with quick passes, exchanges and most importantly in the press. The attack as a whole has really refined the art of quick outbursts that force the opposition to make ugly decisions, and this became gangbusters today. I honestly couldn’t pick my man of the match today, but both players are strong contenders. Coman may have scored a goal and 2 assists and also won a penalty, but Sane was just as dangerous, with several key passes – even if some of the subsequent finishes left something to be desired.

The only real problem I had with this setup was that Thomas Müller sometimes got stuck. Since the full defenders weren’t as aggressive on the pitch as usual, Sané and Coman had to push wider to stretch the defense. With Mané falling to collect and recycle the game, this often left Müller alone and had to rely on his highly fragmented robbery game to contribute and get involved with the ball.

Ever since that fateful day when Serge Gnabry came off the bench against Freiburg and entered our match thread to score with his first touch of the game, he was christened with the nickname ‘FINISHER/INITIATOR’, an image that was still on display. when he put the ball in the back of the net.

This match would see Gnabry strike again from the bench, first playing a delightful through ball to Sané that would be deflected into the net by Bochum’s own Cristian Gamboa, before receiving a pass from Vidović to fire and score the first time from a simply incredible corner. That finish kept me from working properly when I was trying to understand its geometry! Suffice it to say, the FINISHER/INITIATOR isn’t going anywhere.

Chains of the defenseless

I mentioned in a previous article how I really wanted to see Joshua Kimmich unleash his responsibilities as a screening midfielder. Today I need to see exactly that.

With Marcel Sabitzer providing defensive support and the presence of more limited full-backs, Kimmich was given the license to kill, and boy was he going for the throat. His passes were simply magnificent. His balls over the top in the final third and even his balls from central areas to the wingers – particularly Coman who was unmarked for large periods of the game – were a joy to watch. More of this link please, Nagelsmann!

Bayern Munich’s attack is better than ever. Their blistering goal bonanza is the best start ever in Bundesliga history!

In fact, it’s thirteen goals whether or not you count the DFL Supercup as part of the start of the season. And this could be by far Bayern Munich’s best start so far – their previous high-scoring season was topped off with an 11-goal DFB-Pokal blaze. Robert Lewan who?

Including the Supercup, Bayern have scored 13 goals in their first three competitive games of the season. The last time they scored more was in 1988/89 (16) pic.twitter.com/0j9my3g48Q

Likewise and rather surprisingly, the defense was just as solid. The only goal Bayern Munich have scored in the Bundesliga so far this season is due to an individual foul by Manuel Neuer. The defense has been practically flawless, with Manuel Neuer the only real concern as he has made individual mistakes with his distribution in almost every game so far. Neuer also made some questionable food choices, sticking a mid-game banana in his goalkeeper gloves today.

But overall, moving forward and back – there just seems to be no end to this Bayern machine.

If you want to learn more about Bayern Munich’s big win, check out our postgame podcast:

Be sure to stay tuned to Bavarian Podcast Works for all your up-to-date coverage of Bayern Munich and Germany. Follow us on Twitter @BavarianFBWorks, @TheBarrelBlog, @tommyadams71, @bfwinnn and more.