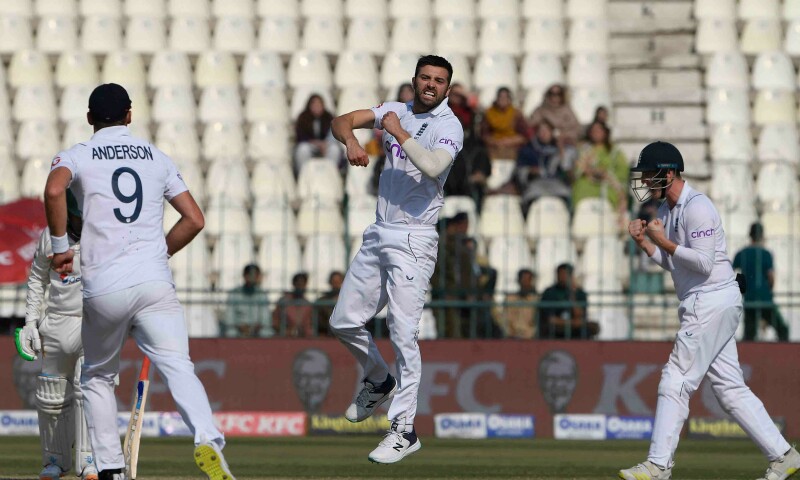 Mark Wood took four Pakistani wickets to give England a hard-fought 26-run win in the second Test at Multan on Monday and take an unassailable 2-0 lead in the three-match series.

The fast bowler finished 4-65 as Pakistan was dismissed for 328 about 50 minutes after lunch, having conceded a challenging target of 355 runs.

Wood, who missed England’s 74-run win in the first Test at Rawalpindi with a hip injury, turned the match in England’s favor with the wickets of Mohammad Nawaz (45) and Saud Shakeel (94) in the space of just 12 balls and one run.

Pakistan fell to 291-7 at lunch, and after the break, Agha Salman (20 not out) and Abrar Ahmed (17) attempted an improbable victory to keep the series alive.

Shakeel and Nawaz’s wickets proved to be the most consistent for England.

Shakeel, who hit eight boundaries in his 314th minute wake, added 80 runs with Nawaz as England found difficult wickets on a Multan field which slowed considerably as play progressed.

In a last ditch effort, skipper Ben Stokes brought Wood in for lunch and was immediately rewarded with Nawaz being caught by wicket-keeper Ollie Pope.

In his next over, Wood forced Shakeel to play a pull-off with a short ball that hit his glove, while Pope took a diving catch to the left.

Pakistan resumed at 198-4 having lost Faheem Ashraf in the sixth over of the day for 10, caught on a slip for spinner Joe Root’s 50th wicket.