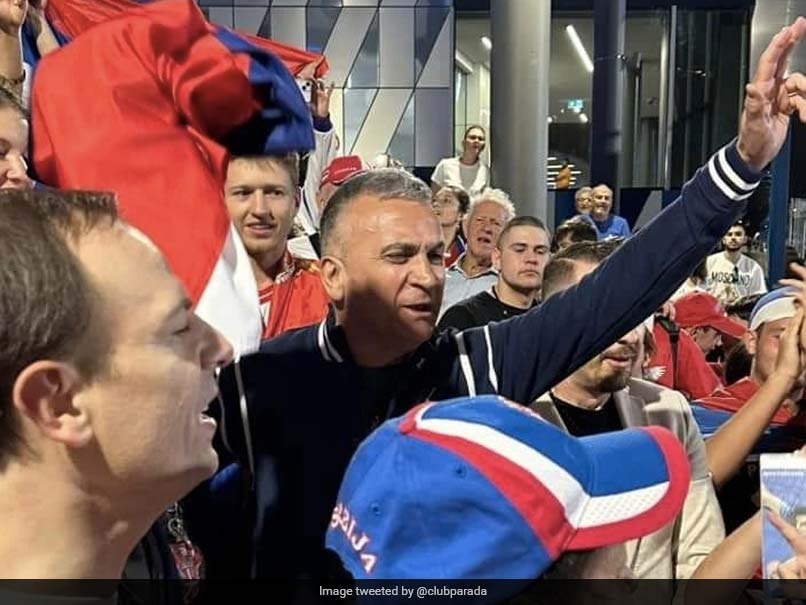 Novak Djokovic’s father has been filmed posing with fans waving pro-Russian flags at the Australian Open in scenes the Ukrainian ambassador denounced as “an embarrassment” on Thursday. The Serbian star had just booked his place in the semi-finals of the tournament on Wednesday night with a straight sets thrashing of Russian opponent Andrey Rublev at the Rod Laver Arena. After the match, a group of fans unfurled Russian flags near the stadium, including one with the face of Vladimir Putin, chanting pro-Russian slogans.

Tennis Australia said four people “disclosed inappropriate flags and symbols and threatened security guards”. The police were called and they were evicted from Melbourne Park.

This is quite a mess for the #AusOpento say the least.

The levels of security breaches that made this possible are staggering.

Apparently he wasn’t the only one. @TennisAustralia
What’s happening there? https://t.co/ZuAQ1kNHmU

Spectators have been banned from carrying Russian or Belarusian flags at the Grand Slam after Ukraine’s ambassador to Australia and New Zealand, Vasyl Myroshnychenko, demanded action when they were seen amongst the crowd last week.

He said on Twitter on Thursday that the latest incident was embarrassing.

“It’s a full package. Among the Serbian flags is: a Russian flag, Putin, the Z symbol, the so-called flag of the Donetsk People’s Republic,” he tweeted with a link to the video.

“It’s such a shame… @TennisAustralia @AustralianOpen.”

Another man was photographed by AFP at the stadium during Djokovic’s match wearing a pro-war T-shirt with the “Z” symbol – associated with support for the Russian invasion of Ukraine.

Since the Russian invasion of Ukraine, Russian and Belarusian players have normally competed as independents under a neutral white flag, as is the case at the Australian Open.