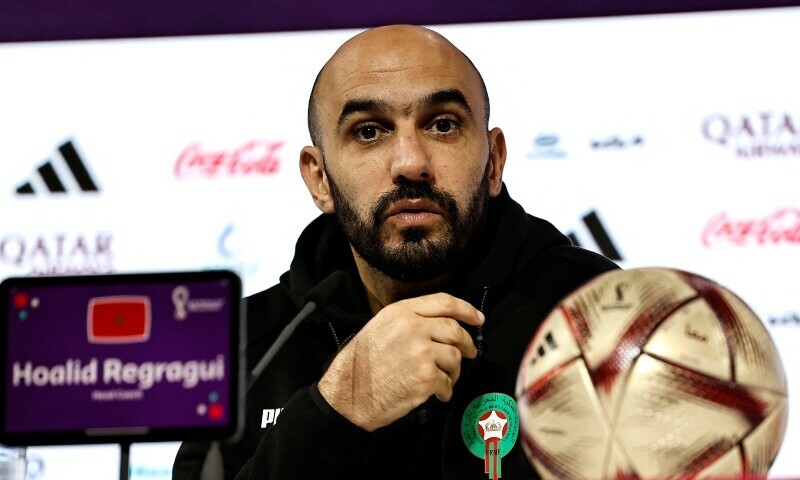 Never mind the fireworks and deafening pop music waiting at the Al Bayt stadium – the real pre-match show for the World Cup semi-final between Morocco and France was provided by Walid Regragui on Tuesday.

The 47-year-old coach of the first African and first Arab team to reach the last four of the World Cup took full advantage of the opportunity to address the world football press in an auditorium in Doha, the day before the duel with Didier Deschamps’ team.

The Moroccan exuded pride, optimism, defiance and humor in a refreshing contrast to the usual drone of casual clichés that coaches ritually unroll before big games.

He scoffed at the game’s modern focus on possession, ridiculed the ‘expected goals’ stats and made fun of people who wrote about his team before knocking out Spain and Portugal.

But alongside the quick reactions and talking points, there was a defiant refusal to play the part of the satisfied minnow and a clear burning belief that his team can beat France and then do it again against Argentina or Croatia in Sunday’s final.

“We want to win the World Cup,” he said, “it’s not just words, we have to move on, maybe we won’t get another chance,” he said.

“We are not the favourites, but we are confident – ​​maybe that drives me crazy, crazy? A little crazy can be good,” he said with a grin.

Regragui had already declared his team “the Rocky Balboa of this World Cup” after they knocked out Portugal in the quarter-finals.

When asked if his team will continue in the same style, in which opponents have a lot of possession, he was unapologetic about his team’s approach.

“We will play to our strengths… this idea of ​​possession, it’s amazing how football journalists love these numbers about 60-70 per cent possession, but it’s no use if there are only two shots on target,” he said , perhaps recalling Spain’s 77% possession and one shot on target against his team.

“If France gives us possession, we will take it, but I don’t think they will. So we will try to stop them,” he added.

If Morocco’s application of the established strategy of mass defense and rapid counterattack isn’t in vogue right now, the statistics certainly are and Regragui has little time to focus on numbers.

“We had a 0.01 percent chance of winning the World Cup at the start,” he said before being told by a reporter that the chance is now estimated at 12 percent.

“We are now at 12 percent? Well, praise be to Allah. We will work on that.” Regragui suggested that his team was criticized in part for refusing to play the role of entertaining losers.

“European journalists criticize our style, I think they find it annoying to see an African team play like them.

“They like to watch and see a little dance [winger Sofiane] Boufal does two nutmeg and then goes back home,” he said.

But even the most discerning could not question Morocco’s determination and pace of work, along with its defensive resilience.

“The key for us is spirit, we play a quality game with good spirit every time. For me, the spirit is the most important thing in football – we have to play with the heart and the spirit,” he said.

Born in France, in what he called a “difficult” suburb southeast of Paris, Regragui spent most of his playing career in France before moving to Morocco to coach. He only took over the national team in August.

It’s been a short reign so far, but his impact – and that of his team – has been huge, resonating far beyond Morocco.

“If we can make young people dream and give a positive image of Africa, the Arab world and our religion, that’s great,” he said.

But what clearly drives Regragui is the satisfaction of exceeding all expectations and defying skeptics.

“Before every round, people thought we were going to be eliminated,” he said. “But we are still here and we will fight to the end. “