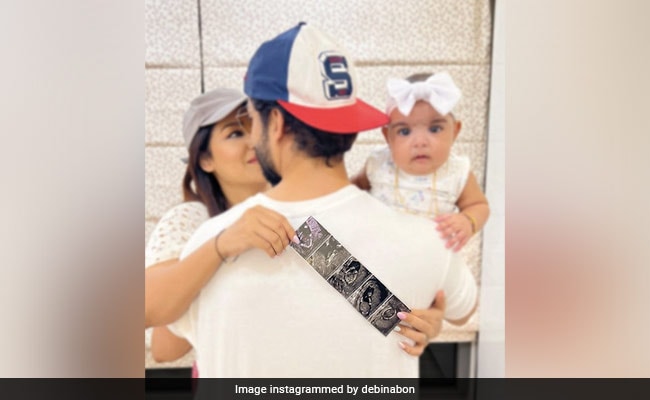 Debina and Gurmeet with daughter. (thanks to: debinabon)

Celeb couple Gurmeet Choudhary and Debina Bonnerjee announced their second pregnancy in an adorable post on Tuesday. Gurmeet posted a photo with wife Debina and daughter Lianna. Gurmeet and Debina shared identical posts on their respective social media accounts on Tuesday, captioning the message: “Few decisions are divinely timed and nothing can change that… This is such a blessing… Coming soon to complete us. ” The post was accompanied by the hashtags #babyno2, #mommieagain, #ontheway, #pregnancydiaries and #daddyagain. The comment section of the post was inundated with greetings from friends of the couple from the TV industry. Rashami Desai wrote: “Wow, congratulations.” Anita Hassanandani added: “How nice! Congratulations.” Yuvika Chaudhary, Tina Dutta and other TV stars also wished the couple.

The couple welcomed their daughter Lianna in April this year. The couple often shares their daughter’s photos on their respective social media handles. On Independence Day, Debina shared this post and she wrote: “Happy 75 years of Independence Day. This celebration is special in every way. My LiPao is too small to understand how special and a proud day this is for all of us, but because we are all taught by over the years she too will understand that it is a proud feeling to be an Indian.”

Debina shared this post and she wrote: “I can’t stop looking at your face…And you’re already looking at the camera…My little tweety bird.”

Gurmeet Chaudhary and Debina Bonnerjee first met on the sets of their 2008 television series Ramayan, in which he played the role of Lord Ram and co-starred Debina as Sita. After dating for a few years, Gurmeet and Debina married in a private ceremony in 2011. The couple also took part in the reality TV shows Pati Patni Aur Woho and Nach Baliye 6.

Gurmeet was also part of shows like Geet – Hui Sabse Parayic and Punar Vivahwhile Debina played the antagonist in the TV show Santoshi Maa. Gurmeet made his Bollywood debut in Khamoshiyan and later played in Wajah Tum Ho.