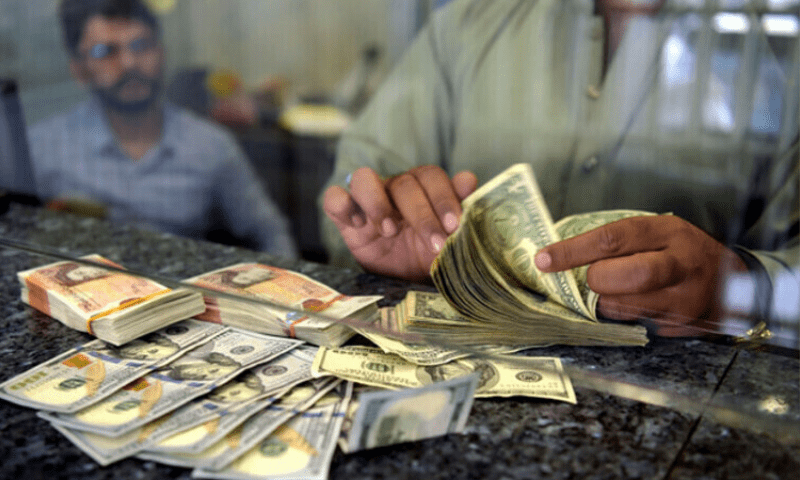 The spread between the USD-PKR exchange rate on the interbank and open markets narrowed Thursday as the local currency fell sharply in value after the Exchange Companies Association of Pakistan (ECAP) lifted an unofficial price cap.

The difference in rates between the markets, which had widened to Rs15 in recent months, now stands at Rs5.

According to data from the Forex Association of Pakistan, the PKR was trading at Rs255 per dollar – a record low – on the open market around 11:40 am. This equates to a depreciation of Rs12 or 4.94 per cent compared to yesterday’s rate of Rs243.

Ismail Iqbal Securities said the USD-PKR exchange rate in the interbank market was also at an all-time high and all the rupee’s gains since being taken over by Finance Minister Ishaq Dar had been wiped out.

Director of financial data and analytics portal Mettis GlobalSaad bin Naseer said the move by the State Bank of Pakistan (SBP) to allow the dollar to appreciate was a “very good thing” for the market. However, there were no sellers, just people who wanted to buy the dollar at the moment, he added.

Naseer said the central bank repaid a loan to China on Jan. 24, further depleting the country’s foreign exchange reserves. One of the key requirements to complete the ninth revision of the International Monetary Fund’s (IMF) program, which would release $1.2 billion, was to stick to a market-based exchange rate.

Following the move to lift the interest rate cap, inflows were expected from the IMF and elsewhere, Naseer said.

“It is a very good thing for the market and the stock market is performing well as a result. The problem used to be just a lack of direction. There is direction now,” he said.

“Wider spreads between interbank and gray markets put pressure on the interbank market. This is one step closer to meeting IMF conditions,” said Komal Mansoor, head of strategy at Tresmark.

Meanwhile, Ecap chairman Malik Bostan said commercial banks were not supplying dollars to exchange companies despite SBP guidance. “The limit on the dollar exchange rate has been removed and therefore it appreciates. It can continue to rise until the supply gets going again.”

He urged the SBP to ensure that commercial banks would supply dollars to the exchange companies.

Currency companies lifted a price cap on Wednesday, which they said created “artificial” distortions and created a black market, where US currency was being sold at higher rates. As a result, the rupee depreciated to Rs252.5 in early open market trading.

However, within an hour of the implementation of the unprecedented decision by exchange companies, the SBP swung into action and crushed the move, forcing exchange companies to drop the initial price from Rs 252.5 to Rs 243.

Before the cap was removed from the rupee, markets looked at three different rates to judge its value: the official rate of the SBP, which is rated by the currency companies, and the black market rate.

Shortly after the takeover, Treasury Secretary Dar called the PKR’s depreciation against the US dollar “the mother of all evils” and introduced a host of administrative measures in coordination with the central bank to keep the exchange rate under control.

However, as the country’s foreign exchange reserves were dwindling rapidly, the financial sector had asked Dar to stop “managing” the rupee-dollar parity, which is one of the key conditions the IMF is setting for resuming stalled talks.