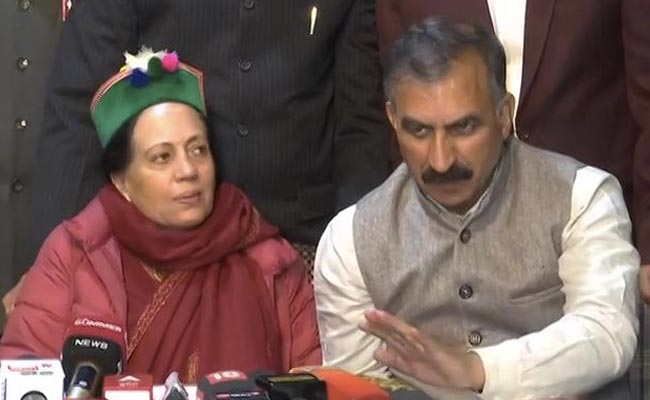 Pratibha Singh and Sukhvinder Singh Sukhu, two lead plaintiffs, after the meeting of the MLAs in Shimla

After a day of drama over who will be prime minister, the 40 MLAs of Congress in Himachal Pradesh passed the party’s traditional one-line resolution on Friday evening, authorizing the “high command” to make a decision. The decision is expected on Sunday.

This mainly leaves it to Sonia Gandhi and Rahul Gandhi, in addition to Priyanka Gandhi who campaigned aggressively in Himachal along with the new National President Mallikarjun Kharge.

The meeting of the MLAs was held with Central Supervisors Rajeev Shukla, Bhupinder Hooda and Bhupesh Baghel present to coordinate. They spoke to every MLA to gauge who has more support.

“We will present our report to the central leadership tomorrow, and they can choose whomever they want,” Mr. Shukla said after the meeting. He insisted that there is no power struggle.

However, the resolution came after a show of force by supporters of Pratibha Singh, head of the state congress, ahead of the meeting in Shimla, her family’s dominant area. A horde of party operatives chanted slogans and even blocked Chhattisgarh Chief Minister Bhupesh Baghel’s car, demanding that Pratibha Singh, a three-time MP and wife of the late leader Virbhadra Singh, an ex-royal, “deserves the highest post”.

In the race alongside her are Sukhvinder Singh Sukhu and Mukesh Agnihotri, both of whom have their support in areas some distance from Shimla. As today’s meeting was in Shimla, support for Pratibha Singh grabbed attention.

See also  What Worked For Sukhu vs Pratibha, Mukesh

Keeping in mind the optics, all three of the party had sat next to Mr. Shukla during the media interaction.

Mr Shukla said MLAs were welcomed by Pratibha Singh at the meeting; the resolution presented by Mr. Agnihotri and supported by Mr. Sukhu, and the MLAs raised their hands to adopt it by consensus.

Dark horses like Harshwardhan Chauhan are also seen in the race, but for now, three factions are the story.

Sukhvinder Singh Sukhu, long-time MLA of Nadaun in Hamirpur district, has risen through the ranks of the Congress wing National Student Union of India (NSUI).

He said, at least on camera today, that he is not a plaintiff. But he made a more distinctively honest comment Outlook during the campaign: “Yes, sure, I too have ambitions to become Chief Minister.” In that interview, he had said that the faction in Congress “died with the death of Virbhadra Singh”.

He was replaced as head of state unit by Kuldeep Rathore in 2019, reportedly in a compromise against factionalism.

Early this year, just months after Virbhadra Singh’s death, his wife was appointed head of the state unit – a move credited with ensuring that sympathy votes don’t go to waste.

Pratibha Singh has repeatedly referred to that sympathy as he attempted the top post. She draws her power and status from the legacy of Virbhadra Singh, the royal scion of Rampur-Bushahr near Shimla, who served as prime minister six times.

Supporters cite an emotional connection to the “Rani”, arguing that “Voices were sought in Raja sahebs name”. She and her son, two-time MLA Vikramaditya Singh, have also made this point as they angle for her to get the seat.

As for Mukesh Agnihotri, leader of the opposition during the now-voted BJP government, he has won his fifth assembly election since moving from journalism to politics about two decades ago.

But he hasn’t said anything about the race yet.

Mr. Agnihotri is regarded as a protege of the “royal family”, especially Virbhadra Singh, but has gradually grown into having ambitions of his own.