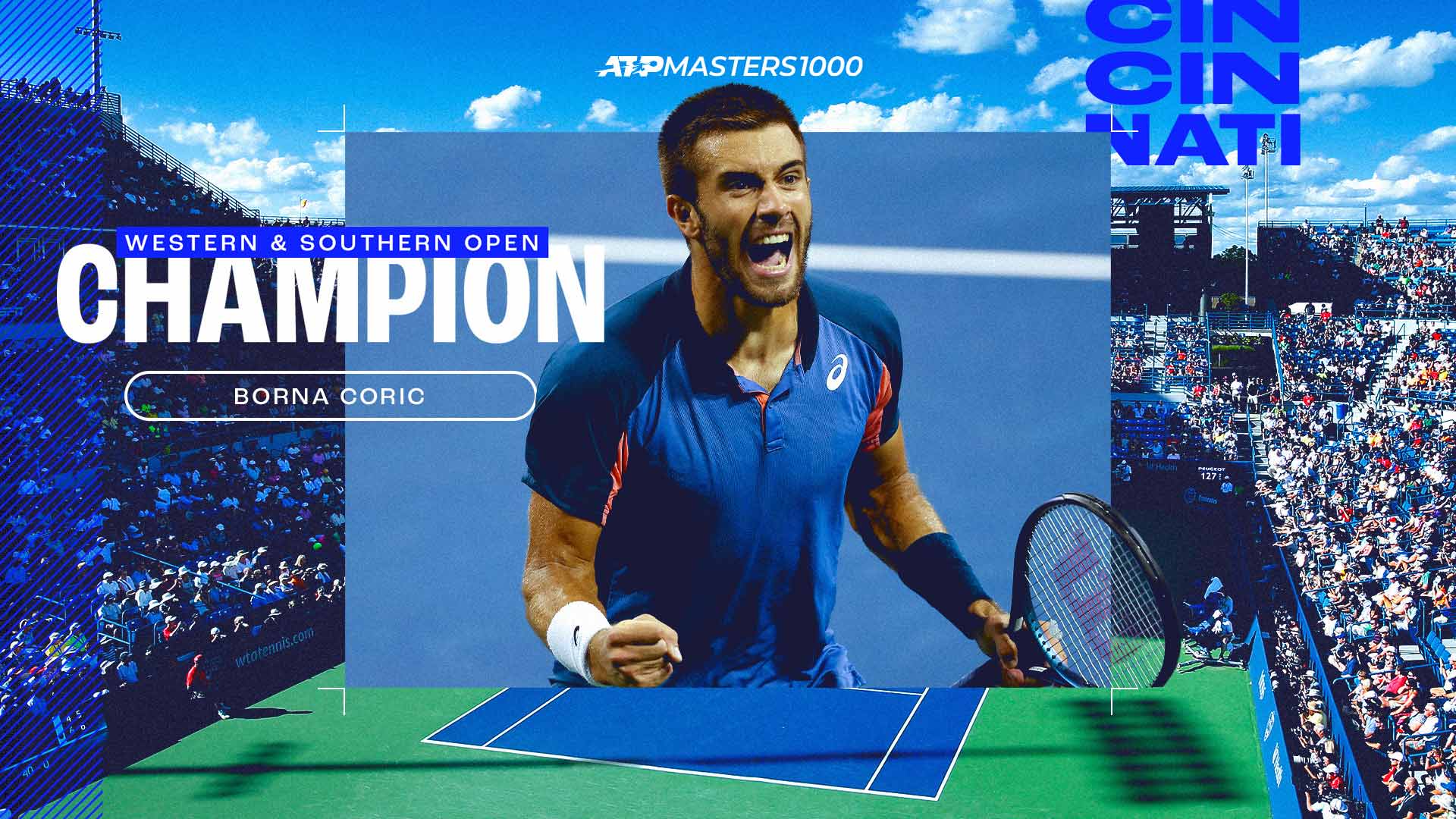 Borna Coric capped off a remarkable comeback with injuries on Sunday as he captured his first ATP Masters 1000 title, beating Stefanos Tsitsipas 7-6(0), 6-2 in the Western & Southern Open last.

The Croat, who took part in his first tour-level final since 2020, defeated Rafael Nadal en route to his second Masters 1000 final. With the pressure on, Coric demonstrated mettle against the Greek, rallied 1-4 in the first set, before making his way past the fourth set in the second set to triumph in Cincinnati after an hour and 57 minutes.

Coric missed most of the season last season due to a shoulder injury and entered the Cincinnati draw with a protected ranking, at number 152 in the Pepperstone ATP rankings. However, he is ranked number 29 in the Pepperstone ATP Live Rankings after his fairytale run, having improved to 2-1 in his ATP Head2Head series against Tsitsipas.

“It was a very, very tough game. At the beginning I didn’t play very well and he pushed me really hard. But I started serving better and playing better and I fought hard,” Coric said in his interview on the pitch. “Then I thought in the second set that I played the best set of the whole year.”

Coric lost just one set on his run to the championship game in his sixth appearance at the hard court event, also beating Lorenzo Musetti, Nadal, Roberto Bautista Agut, Felix Auger-Aliassime and Cameron Norrie. The 25-year-old now has three tour-level titles on all three surfaces, having risen to success on clay in Marrakesh in 2017 and on grass in Halle in 2018.

See also  'Frustrated' Alonso relieved to finish the race strongly, while Ocon praises 'flying' car in his recovery from P16

“Thank you to my parents who are not there, my sister and my team. It’s been very tough for us,” Coric added during the trophy presentation. “With my physio, if I didn’t have him I wouldn’t be on the court… And then of course to my tennis coach, Mate. We have worked very hard and now we are here.”

Tsitsipas flew out of the blocks in a compelling first set, as he shrugged to take a 4-1 lead. Coric showed signs of nerves in the early exchanges but began to settle in as the set progressed. The Croat started to find his place on the serve as he struck off the ground with more depth and pace to claw back to 4-4. With a tiebreaker to go to decide the first set, it was Coric who raced in top gear, taking advantage of early mistakes by Tsitsipas to take the lead.

After beating 18 winners in the opener, the 25-year-old continued to look comfortable at the start of the second set. Coric hit his watertight groundstrokes consistently on return and took the decisive break in the sixth game of the set against a tiring Tsitsipas. The Croat, who made just 14 unforced errors, fend off Tsitsipas pressure during the serve before breaking again to take the biggest win of his career.

Coric appeared to step inside the baseline and attack Tsitsipas in the second set in a move that worked. As shown in his INSIGHTS: Conversion Scorethe Croat was clinically, with a conversion rate of 87 percent, well above the Tour average of 66 percent.

The conversion scores of Stefanos Tsitsipas and Borna Coric in the second set of the Cincinnati final.” style=”width: 100%;” />

You May Also Like: New Data INSIGHTS Offer Fans Better Understanding and Stories

Prior to his shoulder surgery in May 2021, Coric had racked up nine wins against Top 5 opponents and climbed to a career-high World No. 12. The Croat made his comeback at Indian Wells in March and had 8 of his 13 tour-level matches in 2022 before his dream run in Cincinnati.

Tsitsipas was aiming for his third Masters 1000 title and 10th tour-level trophy. The Greek, who retained the title in Monte Carlo in April, defeated Daniil Medvedev in a hard-fought semi-final and is ranked No. 5 in the Pepperstone ATP Live Rankings.

The 24-year-old has also risen to second place in the Pepperstone ATP Live Race To Turin, as he looks to qualify for the Nitto ATP Finals for the fourth straight season. He lifted the trophy during the season finale on his debut in 2019.

Did you know?
Coric is the first player to win a Masters 1000 title and an ATP Challenger Tour title in the same season since Mikael Pernfors in 1993. It has only happened three times since the ATP Masters 1000 debuted as a series in 1990 [also Thomas Muster 1992]. Coric won a Challenger Trophy in Parma, Italy in June.