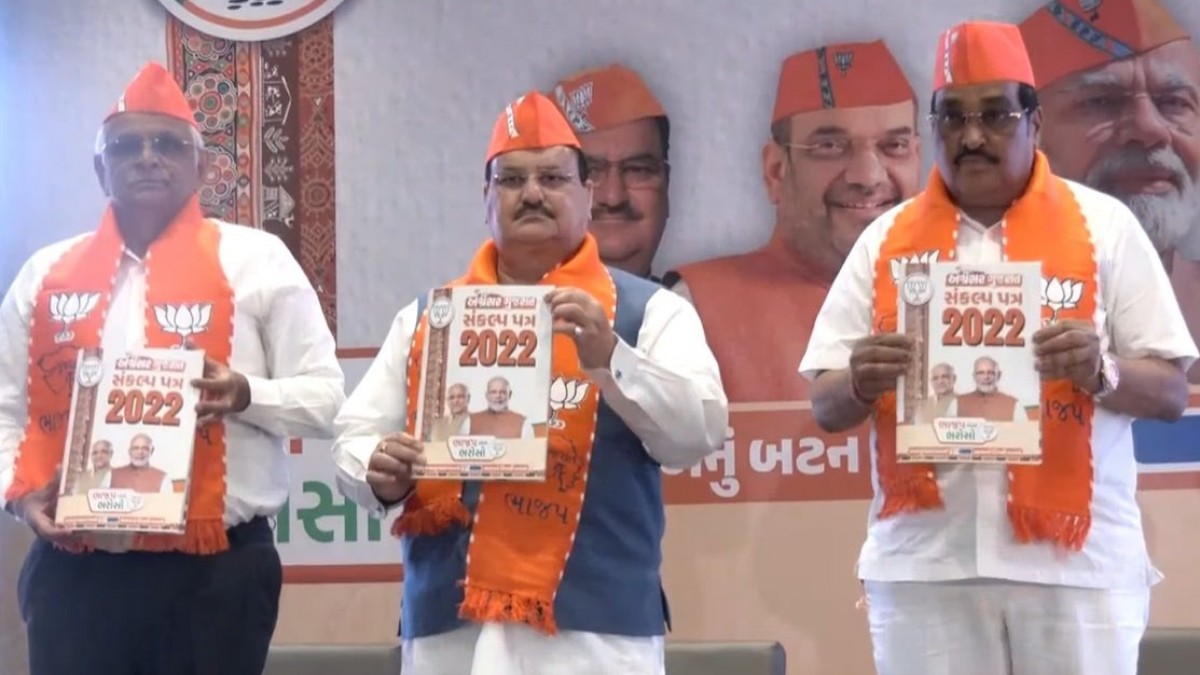 The Bharatiya Janata Party (BJP) released its manifesto for the upcoming Gujarat elections on Saturday, promising to make the state a $1 trillion economy, provide girls with free education and implement the Uniform Civil Code (UCC).

BJP President JP Nadda released the BJP Manifesto on Saturday, dubbed the ‘Sankalp Patra’. Gujarat has two-stage elections on December 1 and 5. The counting of the votes will take place on December 8.

Gujarat is so far the fourth state where the BJP has spoken about implementing UCC. Earlier, Uttarakhand, Assam and Karnataka have also raised the issue of UCC with Uttarakhand CM Pushkar Singh Dhami setting up a committee for it.

The BJP has also pledged to make Gujarat the number one in the country in civil aviation, modernize the state police and bring Rs 5 lakh crores in foreign investment over the next five years.

The BJP has also assured that the amount of health insurance under the Ayushman Bharat scheme would be doubled from Rs 5 lakh to Rs 10 lakh.

The BJP in Gujarat faces competition from the Congress and the Aam Aadmi Party (AAP). The arrival of AAP has triangulated the traditional bipolar Gujarat assembly election this time. Keeping Gujarat, where the BJP has been in power for more than two decades, is a matter of prestige for the BJP as it is the home state of Prime Minister Narendra Modi. It was as Prime Minister of Gujarat that Modi gained popular support to become the BJP’s prime ministerial candidate in the 2014 general election.

Both Congress and AAP have made a slew of populist promises, such as free electricity, cheaper cooking gas, and allowances for all families. AAP consultant and Delhi Chief Minister Arvind Kejriwal has promised to bring the ‘Delhi model’ to Gujarat.

Some of the key pledges in the congress manifesto are 10 lakh jobs in government and semi-government departments, free medical treatment up to Rs 10 lakh, LPG cylinder for Rs 500, 300 units of free electricity per month, unemployment benefit of Rs 3,000 per month, Rs 2,000 pension for divyangs, widows, seniors and destitute women, and loan forgiveness up to Rs 3 lakh from all fishermen.