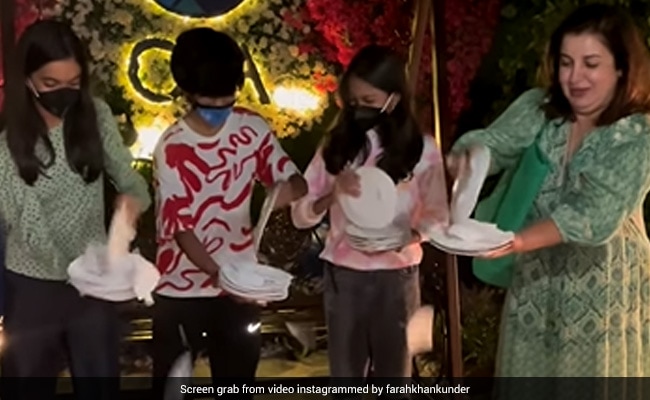 A still from Farah Khan’s video. (thanks to: farahkhankunder)

Farah Khan planned the best kids night out for her triplets and how. The filmmaker-choreographer shared a video on Instagram in which she breaks plates with her children. The video shows her together with her triplets – Czar, Anya and Diva Kunder. Her caption read, “Better break plates than hearts… (who will clean up the mess?)” with hashtags Kids Night Out and Greek Tradition. Caught the video Yeh Hai Mohabbatein fame Mohit Malik’s attention, who dropped a heart emoji in the comment section.

Check out her message:

Farah Khan often shares photos of her triplets on her Instagram. On the occasion of the 75th Indian Independence Day on August 15, the famed choreographer shared a throwback photo of her children dressed in orange, white and green outfits. Her caption read: “Kehte hain humko pyaar se #INDIAWAALE #happy75thindependenceday.”

On the occasion of Raksha Bandhan on August 11, Farah Khan shared another post from her children, in honor of the festival. Her caption read, “Brothers and sisters… mine are now at the age where I have to pay them to hug each other.”

Check out her message:

A few weeks ago, Farah Khan shared a few photos from their Sunday outing with her triplets. She wrote, “Some of the best memories are made in flip flops. ps- it’s a full time job getting the triplets to pose for a picture.”

Farah Khan married her Mai Hoon Na editor, Shirish Kunder in 2004. The couple welcomed their triplets via IVF in 2008.