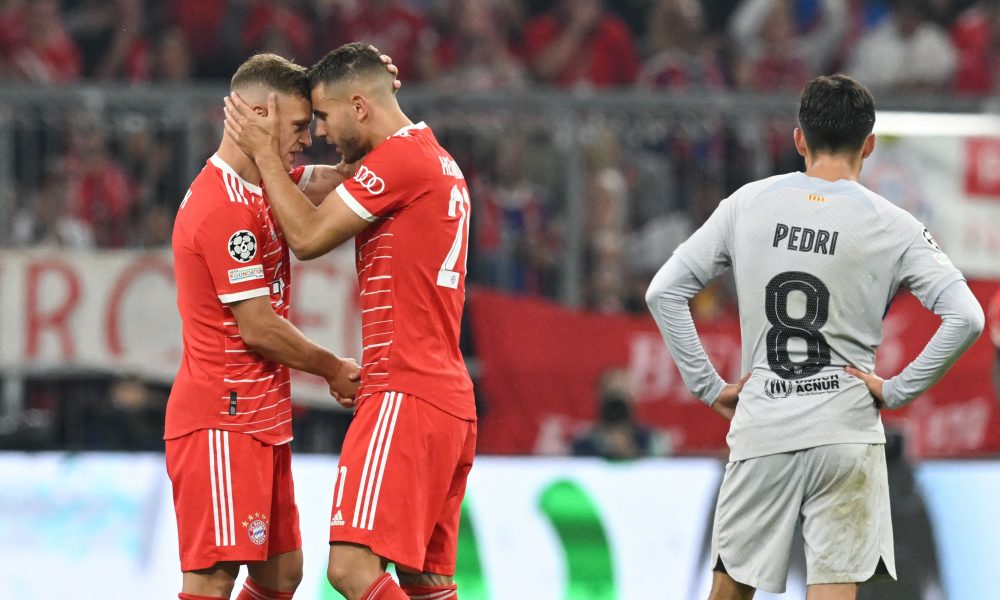 Barcelona entered the game with a vengeance in mind, having lost each of their previous four encounters with Bayern Munich. They had momentum heading into the meeting, having won five of their six games in all competitions this season.

Xavi made some interesting selections for the game, handing over to ex-Chelsea duo Andreas Christensen and Marcos Alonso. The Barça head coach also remembered his heavy hitters like Robert Lewandowski, Ousmane Dembele and Pedri after putting them on the bench against Cadiz.

Barcelona were without a doubt the better team in the opening changes and should have taken the lead well before half of the first half. But Manuel Neuer made two good saves on Pedri and Lewandowski, while the latter also missed a great opportunity in between.

Bayern failed to impress, with a tame effort from Noussair Mazraoui as their only attempt at goal. Lewandowski had another great opportunity to give Barca the lead, but his shot was blocked while Dembele was dismissed a penalty claim as halftime broke.

A few seconds after the restart, Raphinha sent an attack inches wide. Substitute Leon Goretzka of Bayern Munich forced a top save from Marc-Andre ter Stegen a few minutes later. And from the resulting corner, Bayern Munich broke the deadlock in the 50th minute via Lucas Hernandez.

Encouraged by the opener, the Bavarians continued to push toward their hosts and Leroy Sané made it 2-0 four minutes later with a fine individual effort. Pedri came close to scoring, but his chip over Neuer hit the outside of the post.

In the end, Barcelona ruined the missed opportunities in the first half as Bayern showed their clinical character shortly after the break, taking a fifth win in a row against the Blaugrana.

Simple save of Mazraoui’s attempt in the first half, then made a fine stop to deny Goretzka. Caught in no man’s land for the first goal because he didn’t come out fully and didn’t stay on his line.

Recovered as right-back for Hector Bellerin after halftime against Cadiz. Delivered one good cross into the penalty area before rolling into the center back at halftime. In the second half he moved back to right-back but as such had no significant impact, although he was solid defensively.

Starting as a central defender, he kept things tight around the penalty area with his partner, while effectively pushing the ball forward. Moved to right-back in the final phase of the first period before returning to his centre-back role in the second half. Should have done better for the second goal. Not his most impressive exhibition.

Surprise starter as Eric Garcia was Xavi’s preferred option next to Araujo. Made some crucial blocks in the first half and kept the hosts at bay. The Dane did his part, winning all his duels and scoring goals, before being knocked out in front of Eric with 20 minutes to go.

Bold call from Xavi to give Alonso his first start in such a high profile collision. Great cross to give Lewandowski a chance and did well, even if there were one or two moments of concern against Leroy Sane in the first half. Should have been tighter against Hernandez for goal.

Started the game with great intensity, putting relentless pressure on the opponent and forcing errors on the ball and regaining possession. Was brilliant on the ball too, as he did well to give Lewandowski a chance after putting Pedri in front of his save.

Sacrificed by the manager in the second half as he seemed to lose his cool after Bayern’s double attack in four minutes.

Bayern tried to put pressure on him and after two minutes there was a moment of concern, but the Barcelona captain recovered and was as calm and composed as ever. Did well to thwart Musiala’s run and then regularly won possession.

Booked early in the second half for a foul on Musiala. He failed to make an effort after halftime, when the introduction of Goretzka tipped the scales in favor of the hosts.

Back in the lineup after sitting on the bench over the weekend, Pedri got the first big chance of the evening but saw his effort saved by Neuer. He exuded class and composure every time he was on the ball, while not shy about working hard on it.

Created a chance for Lewandowski late in the first half and another chance for Raphinha early in the second, before hitting the outside of the post with a cheeky, slick effort. By far the best Barcelona player on the pitch and deserved so much more. Unhappy.

The Brazilian seemed overwhelmed by the opportunity early on. Involved in an intense duel with Alphonso Davies, with neither willing to give the other an inch. But it was the Canadian who came out on top.

Raphinha got close with a low drilled effort before switching flanks with Dembele after half an hour. Returned to the right after the break and saw another attempt go wrong. Quickly left after Bayern made it 2-0. A humble outing for the Brazilian.

Returning to his old stomping ground, Lewandowski Raphinha almost played on for a chance. Could have done better after Neuer gave him the ball with a bad pass before firing over the bar from a great position. Had saved a header shortly after.

Apart from a tame attempt right at Neuer, Lewandowski did little in the second half. Not the most enjoyable return to Bavaria for the 34-year-old as Barcelona began to regret his missed opportunities.

The move that led to Lewandowski’s chance in the first half started with a fine run. Looked dangerous after moving to the right flank and got a fine claim dismissed. In the second half he made a frenzied run, but the move failed as he couldn’t find a teammate.

Did a good job but it was an underpowered showing overall as his last ball more often than not went missing as he lost the ball a whopping 25 times before giving way to Ansu Fati.

Up for Gavi every hour. Driving from midfield caused some problems.

Replaced Raphinha in the 60th minute. It didn’t take much, even as Barcelona fought their way back into the game. Had to miss an attempt after a deflection.

Thrown instead of Christensen with 20 minutes to go. Didn’t notice much.

On for Dembele in the 79th minute.

Sent for Busquets with ten minutes to go.